Winter has always been a problem for the Georgian electricity system. Even though Georgia has plenty of hydropower, during this season several HPPs — seasonal and small — either stop or substantially reduce electricity generation. In this season, a significant share of hydropower generation comes from two large-scale state-owned pumped-storage HPPs: Enguri and Vardnili. However, exactly when the generation-consumption gap is the largest, most of the electricity produced is used to satisfy the consumption of the Abkhazia region, which on a yearly basis consumes as much electricity as Tbilisi, something we have mentioned in one of our previous articles. This is a costly arrangement for Georgia, as the cheap electricity produced by Enguri and Vardnili de facto cannot contribute to satisfying the demands of the Georgian electricity market and, therefore, lowering the cost of electricity bills paid by Georgian families. On the contrary, due to existing arrangements as well as to generation and consumption trends, it is likely that in the near future, Georgians will have to bear additional costs to continue providing free electricity to the separatist region.

The fluctuation of generation from Enguri and Vardnili between the winters of 2016 and 2017 was apparently determined by different meteorological patterns and by the choices regarding pumped storage in the reservoir. In fact, even though average precipitation in the winters of 2016-2017 and 2017-2018 was almost the same, average precipitation in the spring, summer, and autumn of 2016 was lower than in 2017 (according to precipitation statistics from the nearest meteorological station). While pumping back more water could have contributed to stabilizing generation (obviously at a cost), this did not happen. Consequently, the generation of Enguri and Vardnili in 2017-2018 was substantially higher.

As we write this article, it is not clear whether Enguri and Vardnili’s generation will be enough to satisfy Abkhazia’s consumption this winter or if, instead, Georgia will need to buy the needed electricity from Thermal Power Plants (TPPs) or foreign sources. In January 2019, Enguri and Vardnili HPPs increased their generation by 2% compared to January 2018, while the monthly increase (with respect to December 2018) was 3%. This is associated with an increase in precipitation over the last months. During the last three months, including February, precipitation has been more than four times that of last year. However, precipitation in spring, summer, and autumn of 2018 was low compared to 2017. Moreover, as we do not have information about the water level in the Enguri and Vardnili HPPs’ reservoirs, an accurate prediction of total generation this winter season is currently impossible.

On the demand side, tariffs in Abkhazia remain low (0.4 rubles=1.6 tetri=0.6 US cents per kWh) for households and for legal entities2 (0.85 rubles=3.4 tetri=1.3 US cents per kWh). This, clearly, creates incentives to overconsume. Overall, consumption from Abkhazia has been increasing almost steadily over the 2007-2018 period, with only two temporary reductions in consumption, first in 2013 and, recently, in 2018 (a 3% decrease compared to the 2017 winter season). In January 2019, Abkhazia again increased its consumption by 3% compared to January 2018, while the monthly increase (with respect to December 2018) was 5%. Luckily (Figure 2), as we mentioned above, this winter the generation of the two HPPs also increased, matching (so far) the increase in demand. 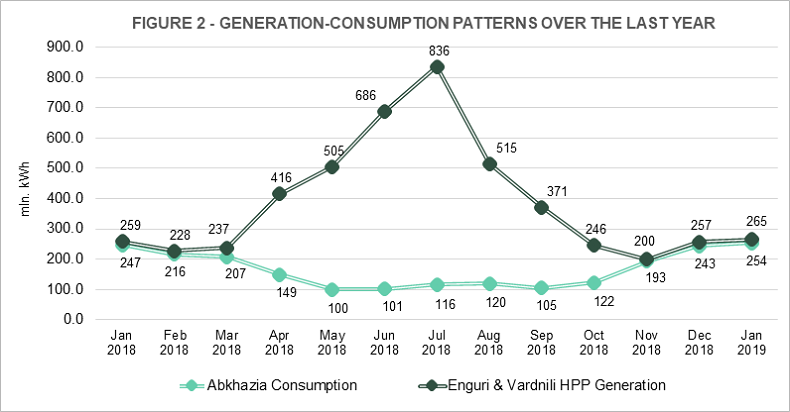 All in all, however, the margin seems to be narrow and a particularly dry winter or an acceleration in electricity demand from Abkhazia could quickly lead (once more) to the emergence of a negative gap. As mentioned early on, this would force Georgia to increase its imports or to increase the internal generation from TPPs, leading to additional costs and reducing the country’s energy security.

This aspect becomes even more concerning if we consider the existing trend in the Georgian electricity market toward increased reliance on relatively expensive imports and generation from TPPs (burning imported gas) to cover the gap between hydropower generation and electricity demand. The current situation, in our opinion, calls for a concerted effort to correct the distorted incentives faced by Abkhazian (and other Georgian) consumers and to allow for the employment of electricity generated by Enguri and Vardnili in a way that maximizes its contribution to the well-being of all Georgian citizens (especially in winter).

As the Georgian market is heading towards a major restructuring, leading in the government’s plans to a competitive wholesale (and, later, retail) electricity market, solving the Enguri-Vardnili-Abkhazia puzzle is becoming, therefore, an even greater priority.

Tags: #consumption, #energy, #electricity,
The views and analysis in this article belong solely to the author(s) and do not necessarily reflect the views of the international School of Economics at TSU (ISET) or ISET Policty Institute.