Water quality has become a global concern in the twenty-first century. Data from the United Nations’ Sustainable Development Goal 6 suggests that only 56% of the world’s domestic wastewater is treated. However, the majority of countries (especially developing nations) do not gather water quality data on a regular basis. This implies that the health of almost three billion people is potentially at risk. According to a UNEP assessment, rapid population growth, urbanization, intensified economic activity, the expansion of agriculture, and a notable increase in the amount of untreated sewage discharged into bodies of open water are the main causes behind this alarming rise in surface water pollution . Moreover, future water-related issues caused by these anthropogenic impacts may well be fueled by climate change, resulting in increased water temperatures, melting glaciers, disruptions in the water cycle, and extreme weather events. Consequently, this combined could have significant negative effects on human health with the intensification of waterborne diseases.

THE SITUATION IN GEORGIA

Pollution of surface water is a notable problem in Georgia, especially in urbanized areas such as Tbilisi. The Kura is one of the most important rivers in the country – within the Georgian part of the Kura River Basin, farmers, the industrial sector, municipalities, and the energy sector each act as major water users. While, according to MEPA , the main source of pollution is municipal wastewater, which pollutes rivers downstream of cities with organic matter, suspended solids, ammonia, detergents, and nitrates from the fertilizer industry.

The 2021 OECD Water Policy Outlook report reveals that untreated sewage is one of the most prominent pollutants in Georgia. Notably, diseases such as Botkin’s disease (hepatitis A) and typhoid are still spread by untreated sewage water.

The Mtkvari River in Tbilisi is mainly polluted with ammonia (ammonia ion), and according to one UNECE report, between 2009-2015 the concentrations of ammonia were several times higher than the EU safety standards for both the maintenance of human health and of aquatic ecosystems. High levels of ammonia are a key indicator of organic compounds in the water, most of which originate from untreated sewage. Under one resolution of the Georgian government, the Maximum Allowable Concentration (MAC) of ammonia nitrogen is up to 0.4 mg/l, nevertheless, the real average levels exceeded this indicator in 2009-2015.

The discharge of large volumes of wastewater containing microorganisms and organic waste leads to the degradation of the chemical and biological indicators of river water quality, biodiversity loss in aquatic ecosystems, and microbiological contamination. Organic matter levels in water are expressed as the biological oxygen demand (BOD) and provide information regarding the presence of sufficient oxygen levels within a water body after the decomposition of organic matter. On average, unpolluted rivers in the EU have a BOD of below 1 mg/l, while the average annual concentration of BOD, measured in four different locations across the Mtkvari River, was largely much higher than 1 mg/l between 2009-2015. Interestingly, according to the national legislation the MAC of BOD slightly exceeds 5.5 mg/l, as represented by the red horizontal line on the graph below. Chemical and bacteriological monitoring and the consistent, complex research of the river are thus still required to access further data and to adjust the initial water management plan along the way. 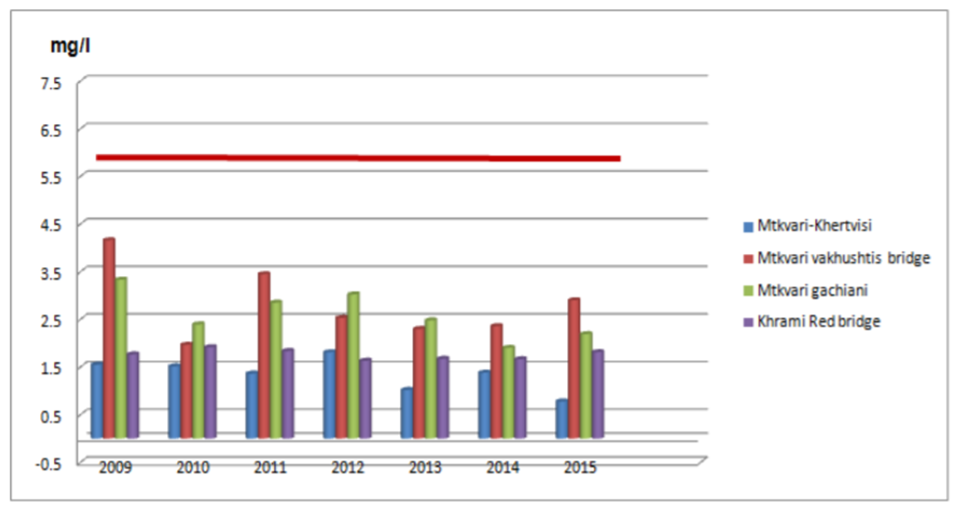 Diffusion of pollution is also a serious problem in the agricultural sector, predominantly caused by fertilizers and pesticides. Soil salinity affects yield, as it interferes with plant nutrients and water uptake. Additionally, most species of the crop are salinity-responsive, resulting in losses ranging from 20% to 50% of the total yield. Such salinity problems are most prevalent in eastern Georgia, which covers approximately 40% of the country’s agricultural acreage. While approximately 10% of the land is affected by salinity in the Mtkvari River area (MEPA & Georgian Amelioration, 2017-2025).

Heavy metals play a significant role in the pollution in Georgian rivers, some of which are even noxious,[1] and they enter the Mtkvari River from untreated industrial waste. Between 2009-2015, discharge from metallurgical and chemical plants into the river contained a metal composition exceeding the MAC defined by the Georgian government by 100 times. While the new strategic document (the National Waste Management Action Plan 2022-2026) has not yet been published.

To achieve the desired level of water quality, public institutions are required to initiate the implementation of environmental policies. Economic policy instruments (EPIs) for water resources can vary and may include incentive pricing programs, trading systems, and resilience management systems. Specifically, incentive pricing programs signal to customers that efficient usage of water resources can be beneficial, where prices can consist of a fixed rate or an adjusting rate depending on the amount used. Trading systems are concerned with the buying and selling of water rights (water access entitlements). While resilience management systems ensure that damage from extreme events is minimized, and that water quality is preserved. Some of these instruments are presently used in Georgia, for example, residential tariffs for public water systems (covering only administrative costs), tariffs for the commercial sector and organizations, and tariffs for irrigation. Although these instruments do not align with existing water laws and regulations, the prerequisites for applying EPIs are that a legal system of regulation for water resources should be well established and that a monitoring system must be in place to meter water flows and wastewater discharges at the individual level. However, these two conditions have not been met for the Mtkvari River – for instance, the extraction of water for agricultural uses is not measured, and there is no surface water licensing system in Georgia. The absence of such instruments results in a lack of water quality data. Consequently, sound water policies still cannot be determined or executed.

Investment in infrastructure, such as sewage treatment plants, is necessary to reduce the impacts on human health, aquatic ecosystems, and the environment. While the construction and development of water infrastructure have historically been funded by central governments through subsidies, public financial constraints and increased demand for improved water systems have encouraged the integration of market-based economic policy instruments for water resource management. Thus, incentive-pricing mechanisms and government intervention can work simultaneously toward the effective use of water resources. In terms of public water supply, recovering the full cost of the resources means that tariffs for water service supply should be set to incorporate all water provision costs.

Another incentive-based EPI is a pollution tax. This should be designed to incorporate all the financial and economic costs imposed on society and the environment into which waste and any pollutants are discharged. In addition, EPIs can also signal the scarcity of water resources, e.g., to internalize resource costs. Incentive pricing might therefore help avoid the costly expansion of water supply technologies via the reduced need for a heavily engineered infrastructure.

In Georgia, major effort and political will are each required for upgrading the existing wastewater treatment systems and building new infrastructure that can reduce the health impacts of water pollution. While this would primarily ensure improved water quality in Tbilisi, it would also benefit water users downstream in Rustavi and Azerbaijan.

Initially, it is essential to develop an integrated water management plan for the Mtkvari River together with a complete inventory of the point sources of water pollution. The rehabilitation of worn-out treatment infrastructure, updating the sewerage and drainage systems, and the introduction of new facilities would thereafter ensure that water quality in the Mtkvari would gradually be restored.

In order to create disincentives for polluting, the introduction of abstraction charges for surface water, pollution charges, and fines for the dumping of illegal waste are highly recommended. Moreover, reducing VAT for companies that adopt water-saving technologies would create an additional incentive for compliance. Thus, on the whole, the credibility of the implementation process requires a combination of strong institutions, reinforcement, and infrastructure.

UN-Water. (2016). Towards a Worldwide Assessment of Freshwater Quality. Genève: UN-Water.

[1] The most toxic of which are arsenic, barium, copper, cadmium, iron, lead, manganese, nickel, molybdenum, silver, and zinc.

Tags: #pollution, #environment,
The views and analysis in this article belong solely to the author(s) and do not necessarily reflect the views of the international School of Economics at TSU (ISET) or ISET Policty Institute.