The Generation-Consumption Gap Keeps Increasing. What Could or Should Be Done About It?
Home ISET Economist Blog

Looking at the consumption and generation trends of the past year, it is evident that Georgia is an electricity importing country during most months, with consumption almost always exceeding domestic generation. The only exceptions over the last 12 months were May and June, when the generation-consumption gap briefly became positive, reverting to the negative again in July. This is quite a dramatic change from how the country’s generation-consumption gap looked back in 2010 when the country exported almost seven times more electricity (1524.3 GWh) than it imported (222.1 GWh) and thermal power generation was reduced to 682.8 GWh. In 2010, hydropower generation (9374.9 GWh) made up 111% of domestic consumption (8441.1 GWh) and there was a feeling that Georgia was on the right path to remain a self-sufficient and electricity exporting country. Things started to change in 2011 when the country was hit by a “dry year” while consumption kept growing. Over time, other factors (such as relatively low electricity tariffs and the country’s fast economic growth) kept pushing demand up while internal generation capacity (particularly hydropower) failed to keep up. 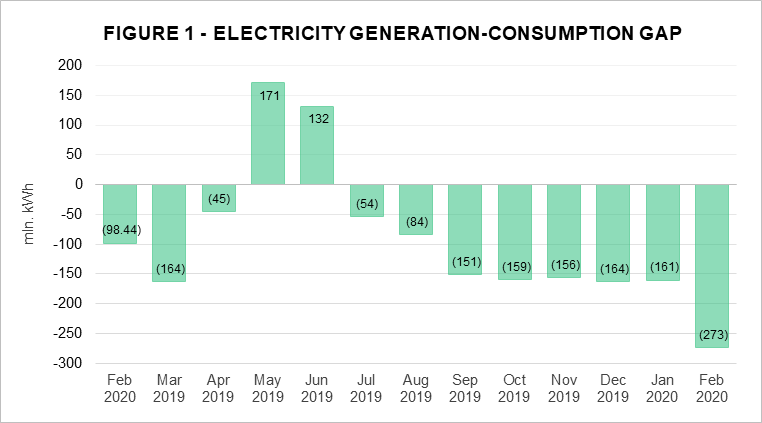 This outcome looks even more worrisome and puzzling if we consider that from February 2019 nine hydropower plants (HPPs)1 and one thermal power plant (TPP) with 2% and 5% respectively of the total installed capacity have joined the electricity generation market. Therefore, a decline in power generation took place despite an increase in the installed generation capacity.

In order to identify the reasons behind the increase in the negative generation-consumption gap, it is, therefore, necessary to analyze the decrease in power generation. What was the reason for it? Should we also expect the negative gap to persist over the following months? 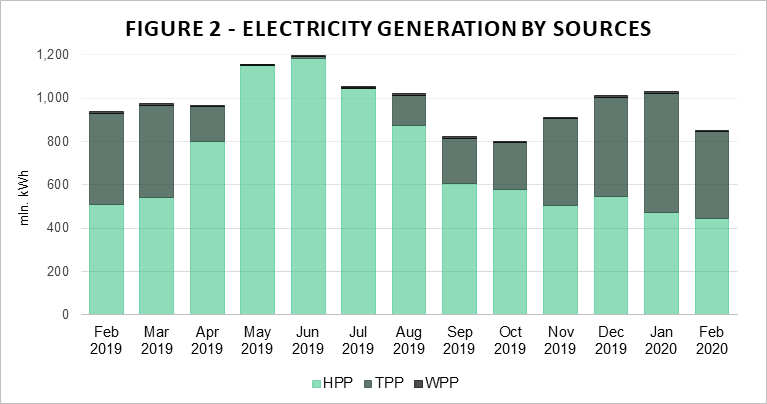 Given the significance of hydropower generation in the Georgian context, we decided to focus on the factors that affect it.

The first factor that comes to mind is the evolution of precipitation rates, which is reflected in potential hydropower generation. Based on the National Environment Agency (NEA) data, average precipitation in 2019-20202 was the lowest since 2007-2008, and down by 12% compared to the same period in 2018-2019 (Figure 3). This trend in precipitation rates is, therefore, consistent with the decreased HPP generation potential during the past twelve months and the past years, reflected in the trend of the widening negative generation-consumption gap.

Looking at other data, the average water level in the Enguri HPP reservoir (the largest in the country) decreased by 4% in February 2020 compared to the previous month (from 452 to 433 meters). Another factor that might explain the recent drop in generation from HPPs is the need to perform rehabilitation works. Decreased generation of two major HPPs indeed accounts for most of the negative generation-consumption gap, since the share of total electricity produced by the Enguri and Vardnili HPPs was 17% in February 2020 (the second-lowest after 13% in February 20173).

Over the past twelve months, the negative generation-consumption gap was filled by increasing the amount of imported electricity from Azerbaijan and/or Russia. In February 2020, Georgia imported 312 mln. kWh of electricity (Figure 4). In addition to the increased imports of electricity, during the past year, a significant share of electricity was produced by thermal power plants. Since TPPs require imported natural gas as the main input – gas which is imported from the same partner countries (Azerbaijan and/or Russia) – the energy security issue for the country is even more severe than demonstrated by the negative generation-consumption gap. The concentration of foreign energy supply sources is not the only reason for concern, though. With increased electricity import (Figure 5) and gas prices (now fixed to $143 per thousand cubic meters of gas) due mostly to exchange rate fluctuations, satisfying local demand either by foreign electricity or gas is becoming more expensive as time passes.

Figure 4. Electricity Import and Import Price Over The Past Year 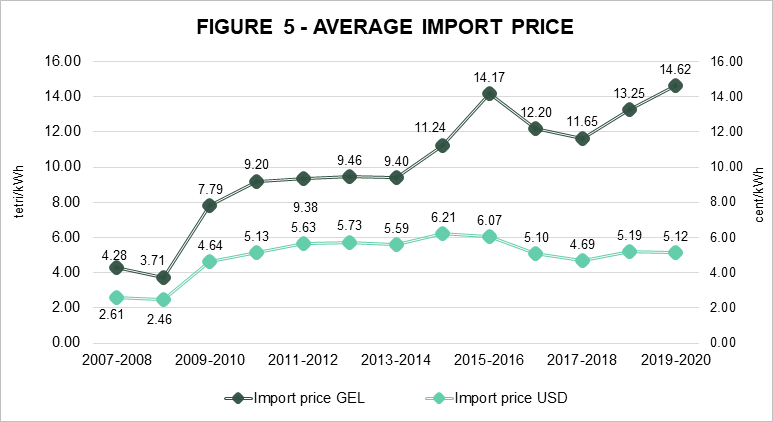 WHAT COULD OR SHOULD BE DONE?

As far back as 2013, when the first signs of a potentially widening negative generation-consumption gap appeared, ISET-PI discussed several potential options policymakers might have considered.

At that time, we argued that there was a need for:

Seven years later, it looks like there is still a lot to do in all these directions.

HPPs still dominate the current power generation structure, as well as future projects. According to the future investment project list5, 63% of the new total installed capacity (6038 MW) will be provided by HPPs, while wind power will deliver an additional 20% and, thermal and solar power plants (SPPs) will account for 9% each. Since lower precipitation rates and increased temperatures are expected to create unfavorable conditions for hydropower generation, in our opinion, supply-side policies should encourage further diversification of power generation sources by promoting non-hydro renewable energy projects while pursuing the quick and full recovery of the generation capacity of Enguri.

Some space also exists for better demand-management policies, with more emphasis on promoting energy efficiency. It is possible that the upcoming liberalization of the electricity market will help in this respect if electricity prices more closely reflect the real cost of electricity.

In the meantime, the Georgian power system remains vulnerable to sudden fluctuations in the availability of electricity at affordable prices. We should expect a very tight market in 2021, when the Enguri HPP will be closed due to diversion tunnel rehabilitation works (which are supposed to start in February 2021 and last for approximately four months). However, this will hopefully help bring Enguri closer to its true generation potential, which will help in the longer term.

In conclusion, while we cannot precisely predict for how long the negative-generation consumption gap will persist, we remain positive that a lot can be done to reverse this trend and strengthen the country’s energy security.

Tags: #consumption, #electricity, #energy,
The views and analysis in this article belong solely to the author(s) and do not necessarily reflect the views of the international School of Economics at TSU (ISET) or ISET Policty Institute.