To Prevent, to Repair, or to Start Over: Should Georgia Put ‘Maintenance’ Ahead of ‘Investment’ in Its Development Dictionary?
Home ISET Economist Blog

In a recent blog post, Y. Babych and L. Leruth raised several issues related to public infrastructure management in the city of Tbilisi. They observed that the consequences of poor past management practices were highly visible. But some of these consequences are also less visible or less immediate. Take schooling, for example. If the authorities fail to plan for the expected increase in the city’s population over the next few years and neglect to build an adequate number of kindergartens/pre-schools, the results will be overcrowded, fast-decaying pre-schools, and eventually poor educational outcomes. Similarly, as the number of cars keeps growing, the authorities must plan new roads and enhance their maintenance.1 Overall, the issue is one of striking the right balance between new investments, and the rehabilitation and maintenance of existing ones. In view of the importance of these infrastructure costs in the budget and the linkages that exist between them over the lifetime of infrastructure, it should be done within a medium-term economic framework.2

Yet, on paper, Georgia has invested more in infrastructure than e.g. Estonia. Obviously, infrastructure investment (building new infrastructures) is a critical factor of development. As argued in Ari et al. (2020) and many others, it can have important multiplier effects and, in the case of Georgia, is a key factor to speed up convergence with Europe. Strictly from that point of view, Georgia has fared well. Public investment grew sharply from 3% to 8% of GDP between 2003 and 2007 and was then kept at that level until about 2012. It then declined a bit but rose back to a respectable 6% after 2017 (see PIMA GEO). A comparison with Estonia seems to confirm this good impression. Public investment in Estonia went below 4% in 2004 and peaked at 6% in 2012 before falling back to 4% around 2015 and this is still high compared to a group of advanced economies, Nordic economies, or even the EU average (see PIMA EST, p. 14). Unsurprisingly, the public investment effort in Georgia has translated into higher public capital stock. In Estonia, it rose from around 47 to 57% of GDP between 2004 and 2015, successfully catching up with comparator countries (EU, advanced economies, Nordic countries) whereas, in Georgia, after a decline from 130% that started in 2000, it has stabilized at about 90% of GDP since 2007 (PIMA GEO, p.13).

Is Estonia a good point of comparison for Georgia? Yes! They share several features, including a common social and economic Soviet legacy. Both countries have a small population. Estonia numbers just 1.3 million people, of which 46 percent reside in the capital city of Tallinn. The population is larger in Georgia, at 3.72 million, but a high share (one-third) also resides in its capital, Tbilisi3. The capital cities in both countries generate more than half of their countries’ GDP. Importantly, Georgia has regarded Estonia as a sort of role model for reform. For example, in 2017, Georgia has followed a unique Estonian model to abolish tax on non-distributed corporate profits. Georgia is also a priority country for Estonia’s bilateral aid. There are major differences though. Estonia’s GDP per capita stands at 23,787 USD, way above Georgia at 4,765 USD (2019). Estonia is a member of the EU and NATO, while Georgia aspires to membership in both clubs. And, as we just discussed, capital investment in Estonia is substantially lower than in Georgia.

How good is the infrastructure in Estonia, then? Put plainly, and in spite of the good numbers for capital investment in Georgia, it is better than in Georgia. That is another empirically obvious difference with Estonia.

Why is it better? The answer is simple: its management, especially maintenance! Both countries recently went through a Public Investment Management Assessment (PIMA), a comprehensive framework developed by the IMF to assess infrastructure governance, including key institutions, public investment practices, IT system, legal framework, and staff capacity. The performance of Georgia’s and Estonia’s public investment management systems can be compared in the table below. It is apparent that the Georgian system’s relative weaknesses lie in the areas of planning, budgeting and maintenance. In particular, the quality of national and sectoral infrastructure plans in Georgia receive low scores on both institutional design and effectiveness from PIMA, primarily because Georgia’s sectoral strategies tend to cover only new initiatives and public investment objectives are “not consistent with effective investment.” In addition, project selection, appraisal, and implementation are all areas where reform priority is high.

In Georgia, donor involvement in an infrastructure project tends to raise the quality of its management, which is good news. Projects that are not funded by donors (60% of the projects) tend not to follow the standard appraisal procedures, which means that one cannot be certain that a planned investment project is indeed necessary, cost-effective, and will be efficiently implemented. To complete the picture, ex-post audits are irregular (the PIMA reveals that no individual projects audits were completed by SAO during 2015-2017). Maintenance funding is another area where differences are apparent. In Estonia, maintenance funding is “costed, planned, monitored and reported.” In Georgia, according to PIMA, there is “no standard methodology for maintenance requirements, or to track maintenance funding.” 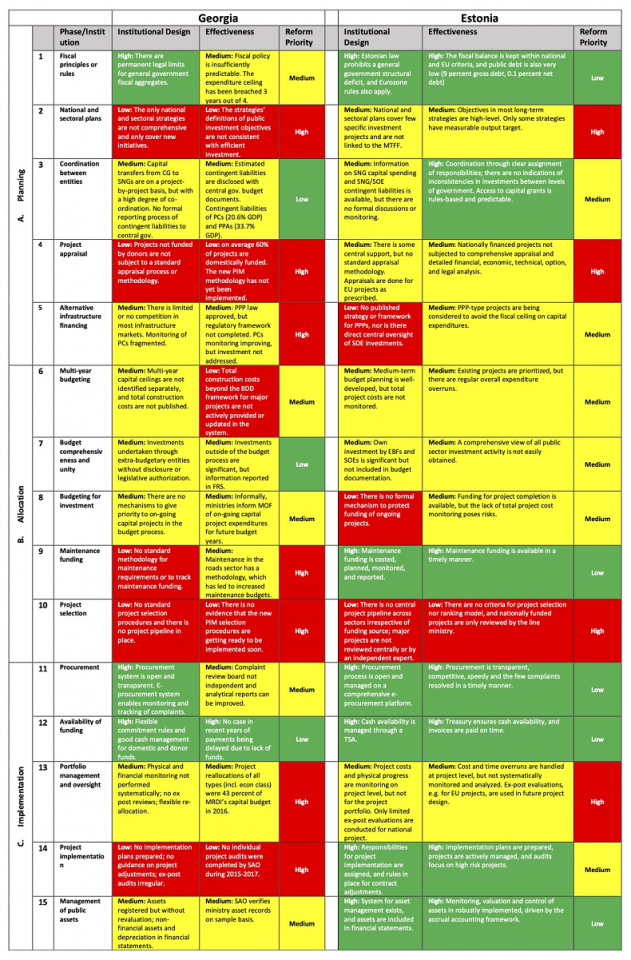 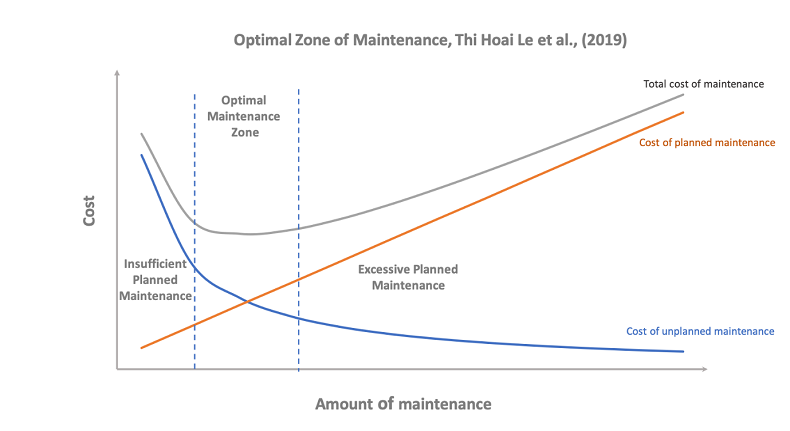 Unfortunately, the bias against spending on maintenance extends to public accounting rules. As we mentioned at the beginning of this blog, capital investment looks good on paper. Rehabilitation is also reported as an investment item. Maintenance, on the other hand, appears as a current expenditure item in the commonly agreed budget presentation (GFS, 2013). Spending more on maintenance will therefore not look good in the first instance because more maintenance spending will reduce government savings.

What should one do then? Fortunately, there are some answers:

• All investments should be assessed in terms of their medium-term costs and these costs must constitute one of the cornerstones of budget preparation within a medium-term economic framework;

• The donor community eager to help Georgia (and other countries) should carefully look at the necessity to build new infrastructure and perform regular assessments of the management of existing projects (PIMA); and

• The authorities in Georgia should pay more attention to infrastructure management issues and perhaps start giving the word ‘maintenance’ a priority over ‘investment’ in the country’s development dictionary.

In short, maintain so as to prevent first; rehabilitate when needed, and only start over when necessary. This should lead to better and cheaper investments.

[1] Of course, they should also consider incentives to promote the use of alternative ways of commuting and of working remotely, but that is not the topic of this blog.
[2] We leave aside issues such as historical preservation, the quality of urban and public spaces, or car parking availability that belong to the field of urban planning. We also leave out of our analysis the risks associated with a laissez-faire approach to housing construction, even though the implications may be dramatic (J. Salukvadze, O. Golubchikov, 2015), with a majority of the population would no longer be able to afford the housing being built using public support.
[3] Data for both countries from 2019.

Tags: #infrastructure, #investment,
The views and analysis in this article belong solely to the author(s) and do not necessarily reflect the views of the international School of Economics at TSU (ISET) or ISET Policty Institute.

Giorgi Mzhavanadze
The impact of COVID-19 on tobacco consumption in Georgia
Excessive tobacco consumption is an important public health policy issue. According to estimates by the World Health Organization (WHO), 32% of the adult population in Georgia smoked tobacco in 2019 (WHO, 2021). The prevalence of smoking in men was 56.9 percent – the fourth in the world and first in Europe.