Sometimes, transformation requires a crisis. Economists in particular are very well aware of this maxim. We are reminded of it every time a country undergoes an economic shock. A country in those times is a bit like a patient who gets the last warning from a doctor to drop the unhealthy habits or face irreversible consequences.

One of these scenarios has been unfolding in front of our eyes during the past year. Georgia’s neighbor and one of the largest trading partners, Azerbaijan, has been going through tough times.

THE UNFOLDING OF A CRISIS

In the last year, Azerbaijan’s economy, like that of many other oil-exporting countries, was severely affected by the collapse in the worldwide crude oil prices. As the global oil price dropped by 70%, the oil sector of Azerbaijan plunged by nearly 35%.

For an economy where the oil sector accounted for more than half of GDP in the last eight years, there was only one prospect – a sharp national currency devaluation.

Unable to fight the devaluation pressure, the Central Bank of Azerbaijan (CBA) announced a switch from a fixed exchange regime to a managed float. Unfortunately, prior to this, around 60% of the foreign exchange reserves were spent to sustain the currency peg. During that time the CBA devalued the Azerbaijani manat (AZN) only once by 30%. Right after the switch to a managed float was made, manat depreciated further by 52%. Overall, the currency lost more than half of its value vis-à-vis the US dollar. 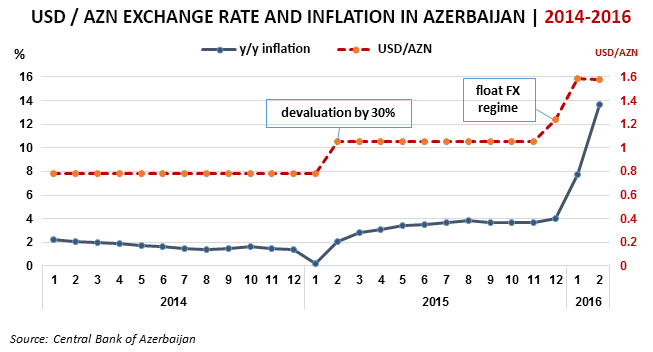 Almost immediately in the wake of devaluation the consumer prices started to climb. Food, clothing, furniture, – for years all of these goods were cheaper to import from abroad, and their local producers were priced out of the market.

Unfortunately, the drop in budget revenues in 2015 also meant the government could not afford to expand the social security programs. The only promise the government has made was to adjust the payments for the most vulnerable part of the population, the pensioners. As a result, Azerbaijan faced a wave of political and economic protests – something almost unimaginable before in the tightly controlled political climate of the country.

THE OPPORTUNITIES FOR THE NON-OIL SECTOR

As bad as the depreciation was, it gave much-needed relief to some sectors in the non-oil economy. Both the exports and the import-competing locally produced goods became more competitive almost overnight.

The total output of the non-oil sector expanded by 4.4% in 2015. Not surprisingly, the trade sector contributed 2.37 percentage points to this increase, expanding by 16.7% year on year (above the five-year growth average for this sector)1. Agriculture also expanded at a good pace of 7.8%, contributing 0.74 percentage points to the non-oil sector growth. Other expanding sectors were transport and storage (more than 10% growth, contributing 0.8 percentage points), accommodation and food services (grew by 16.3%, although the pace of growth was below the average of the previous years, pointing to the effect of declining incomes and wealth).

Other non-oil sectors also managed to grow, albeit at a slower than average pace.  Unfortunately, the once-booming construction sector declined precipitously, posting a negative 11.5% growth in 2015.

Overall, the non-oil sector has increased its share in Azerbaijan’s GDP to 67% in 2015. The graph below illustrates the changes that have taken place. 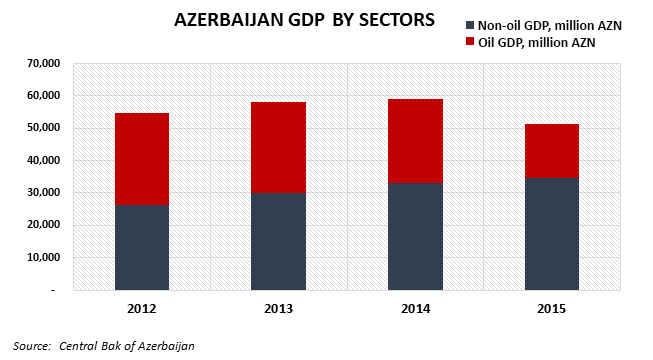 In the first three quarters of 2015, the foreign direct investment in the non-oil economy has declined relative to both 2014 and 2013. The non-oil FDI in Q1-Q3 2015 was 678 mln USD, a 20% decline compared to the same period in the previous year. While the data does not allow us to see the sectoral breakdown of non-oil FDI, it may well be the case that the struggling construction sector was responsible for the decline.

While it is too early to say what future awaits the non-oil sectors of Azerbaijan, it is likely that the volatile external environment will slow down the progress. However, the transition to the non-oil economy must be made.

WHAT CAN BE DONE TO FACILITATE THE TRANSITION?

Since the development of the non-oil sector is very sensitive to the institutional environment of any country, batting corrupt practices in all spheres of economic life would be a top priority for Azerbaijan. As far as foreign trade is concerned, it will be equally important not to succumb to the temptation of protectionism, which could hurt the sectoral competitiveness over the long run.

If successful, these policies would ensure that a decade from now the year of 2015 will be remembered in Azerbaijan as a year of opportunities, the dawn of the new post-oil economy.

Tags: #oil, #azerbaijan,
The views and analysis in this article belong solely to the author(s) and do not necessarily reflect the views of the international School of Economics at TSU (ISET) or ISET Policty Institute.