Beginning in July 2017, if an entrepreneur offers and/or advertises property and/or service for sale in the territory of Georgia, the price of the property/service shall be expressed solely in GEL. According to the bill, failure to abide by the new law when denominating the price will lead to a warning, while a repeated offense will lead to a penalty of 1000 GEL. Each subsequent offense will be subject to a penalty of 5000 GEL.

This law is one of a few changes which will take place in support of a de-dollarization plan implemented by the Georgian government. Currently, around 68% of all loans issued by commercial banks are in USD; this figure is even higher for mortgage loans at 82%. Despite a declining trend, the dollarization rate in Georgia still remains very high. 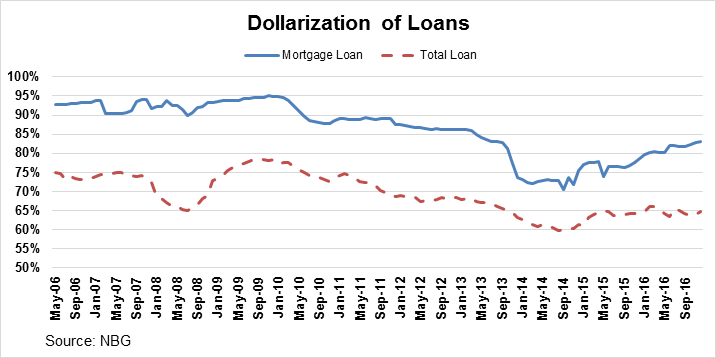 The main reason for high dollarization stems from the low level of long-term GEL resources available at commercial banks or other financial institutions, in comparison with resources in foreign currencies, particularly dollars. This leads to the higher interest rate on GEL loans and much lower interest rates on USD loans. In other words, it is much cheaper for people to take loans in dollars rather than in the local currency if currency risk is not taken into account.

The availability of GEL resources in banks can be increased through the increase of savings in local currency, and in this regard, people’s trust in the local currency plays an important role. People prefer to save in dollars, as they observe the very high instability of the GEL/USD exchange rate, and the high chance of GEL losing its value.

Introduction of new laws. With the goal of strengthening and stabilizing the national currency, the Georgian government has adopted a de-dollarization plan. The plan includes the implementation of some amendments in legislation to protect borrowers against foreign exchange risk. In particular, small loans (below GEL 100,000) will be issued only in local currency. The government, with the help of the National Bank of Georgia, will develop a scheme to facilitate conversion (to the local currency) of those loans that were issued before January 1, 2015, in USD. In addition, starting in July 2017, if an entrepreneur offers and/or advertises property and/or service for sale in the territory of Georgia, the price of the property/service shall be expressed in GEL.

While the first two measures will automatically decrease the number of loans taken in USD, the effect of the latter law on de-dollarization is uncertain.

Currently, almost 99% of advertisements for real estate property sales are quoted in USD (calculated based on place.ge website data). People accept USD as the main currency to make savings and pay when buying real estate. Thus, the government believes that pricing in GEL should “teach” people to price and buy real estate in GEL, and therefore willingness to save money and take loans in the local currency should increase as a result.

The law will be efficient and bring positive results only if people can totally move away from pricing in USD on paper and in their minds. But how realistic is that goal?

To speculate on the results of this policy, we first have to differentiate primary and secondary real estate markets, as they have different approaches when pricing the property. Prices in the primary market are set based on construction costs. According to different sources, from 30% to 70% of construction cost is for imported goods, which are automatically calculated in USD. This figure varies for different construction projects, depending on quality, design, and other factors. The rest of the cost is in local currency; however, as the majority of pricing happens in USD, the whole cost is calculated in USD. If construction companies have to price property in GEL, they will need to find the optimal way to convert the so-called “imported” cost from USD to GEL, to avoid loss if GEL depreciates during the project implementation and selling process. The secondary market does not depend on “imported” cost, and pricing in USD is related solely to people’s distrust in local currency as a store of wealth.

Pushing sellers to quote property prices in GEL if they still “think” in USD might actually lead to an increase in real estate prices. It depends on the so-called “menu cost,” that is, the cost of modifying advertisements. If menu cost is high, to hedge against the risk of the GEL losing value against USD, sellers will tend to set higher prices than the actual price, which is based on the current GEL/USD exchange rate.

For both the primary and secondary markets, the stability of the GEL/USD exchange rate will lead to a smoother shift from pricing in USD to GEL. Stability will be also important for people who plan to buy property. Currently, sales prices in USD are more predictable than in GEL. USD prices change under market forces, while prices in GEL also depend on the exchange rate (see the graph below). If prices in GEL are to become stable, people will start saving in local currency for their property purchases, which in turn will have a positive impact on de-dollarization.

Choosing the right timing for this law could be key to its success. Neighboring countries, such as Russia and Azerbaijan, have already implemented these policies. However, the economic situation when this change happened was much more favorable. Russia introduced this law in 2007, when Russia was expanding at a rapid rate, with the Russian currency (RUB) gaining its value in comparison with USD, while the RUB/USD exchange rate was fixed and therefore quite stable. The strong local currency helped make it much easier for sellers to start pricing in RUB; nonetheless, symptoms such as price increases and volatility in RUB were observed as well, in the short run, right after the change. Similarly, in Azerbaijan, at that moment the exchange rate was also fixed, and the economy was growing, resulting in high trust in the MANAT, and the switch also happened very naturally.

The very unstable GEL/USD exchange rate and almost constant month-to-month depreciation of GEL against USD will not work in favor of the new law. Even if theoretically this law could bring positive results as a part of the de-dollarization plan, it’s doubtful that it will be very successful upon implementation.  Hopefully, the de-dollarization plan as a whole will have a greater impact not only on the number of loans taken in foreign currency but on increasing the stability and strength of the national currency.

Tags: #dedollarization, #private sector, #real estate, #lari, #georgia, #exchange rate,
The views and analysis in this article belong solely to the author(s) and do not necessarily reflect the views of the international School of Economics at TSU (ISET) or ISET Policty Institute.