What are the outcomes of the new insolvency law?
Home ISET Economist Blog

Georgia’s new insolvency law – the Law of Georgia on rehabilitation and the collective satisfaction of creditors’ claims – became effective on 1 April 2021. Under which, if a business operating in Georgia has reached a low ebb and is no longer able to meet its financial obligations, it has the opportunity to regulate relations with creditors based on new legislative instruments – effectively, it is able to rehabilitate and return to the market in a viable manner, or, if necessary, it might declare bankruptcy and exit the market.

This new insolvency law has now replaced the previous legislation, which contained some significant flaws. For instance, the old legal framework did not provide sufficient incentives to encourage the rehabilitation of businesses with the chance of survival, it was unable to resolve insolvency cases quickly, and it failed to ensure a fair order of creditors. Moreover, proceedings under the old law were associated with substantial costs. Consequently, the previous insolvency law had a negative effect on the country’s overall business climate.

Within the insolvency component, Georgia’s ranking in the World Bank's annual Doing Business rating reflected these aforementioned negative impacts. Due to this low score, Georgia lagged significantly behind other countries, particularly in comparison to its exceptionally advanced results in other areas of doing business. For instance, in 2020, Georgia ranked 64th in the insolvency component of this ranking, but seventh in the world in terms of the overall Business Enabling Environment.

Against the backdrop of the obstacles mentioned, there have been high hopes relating to the new insolvency law, many of which will take time to evaluate fully; however, almost two years after its adoption, some results can already be discussed.

This blog will attempt to evaluate the present outcomes by analyzing the key performance indicators of the insolvency reform, while also incorporating the perspectives of insolvency experts on the reform’s development.

To consider the effectiveness of the new insolvency law, it is necessary to examine the frequency with which businesses filed requests to start insolvency proceedings before city courts – i.e. the court filing rate.

Even during normal phases of economic development, insolvency is a healthy market phenomenon. In a recessionary situation, such as during a pandemic, however, business insolvencies should logically increase. Consequently, it is reasonable to assume that the number of insolvency cases filed should have been increasing over the past two years.

According to an analysis from ecourt.ge (an electronic portal for court case registration), courts have been approached a total of 80 times to initiate insolvency cases since the enactment of the new law. A detailed breakdown of the indicator is depicted in the graph below.

Graph 1. Court filing rate under the new insolvency law, as of 15 January 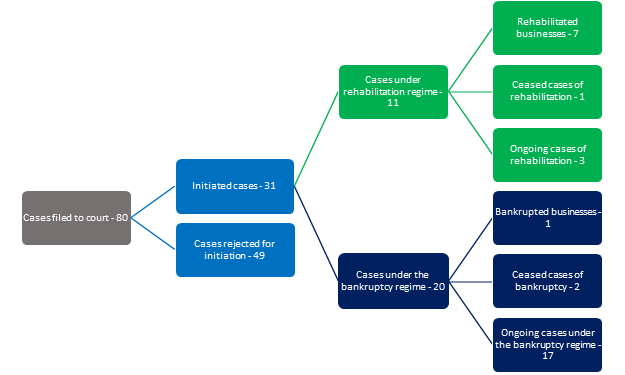 As depicted in Graph 1, the court filing rate under the new law is significantly lower than the comparable amount during the old law (151). This discrepancy may be resultant due to two core factors: first, it is possible that demand for the law is naturally low in the country, as there are not a large number of potentially insolvent businesses. This explanation however seems implausible, given that, as stated previously, the pandemic-related recession would have instigated an increase in business insolvencies, despite the rapid recovery observed during the post-pandemic period.

The second possible explanation for the observed trend is a lack of awareness regarding the benefits of the new legal framework among businesses. Although the use of the mechanisms provided under the new law would have aided their rehabilitation, firms may not be sufficiently aware of the advantages of the new legal framework. Experts in the field of insolvency also stress the importance of this challenge. The chair of the Business Rehabilitation and Insolvency Practitioners Association (BRIPA), Nana Amisulashvili, stated that an “increasing numbers of businesses are attempting to resolve their financial difficulties via the new legislation. However, greater awareness in this direction is required, as is businesses’ utilization of these opportunities at the earliest possible period of their financial hardship, when the company still has the potential to survive.”

It is noticeable that the court filing rate did increase in the second half of 2022. Such a tendency enables us to make a positive prognosis: the new law is still likely to be utilized by more businesses that require assistance and have the potential for rehabilitation.

THE SHARE OF REHABILITATION IN TOTAL INITIATED INSOLVENCY CASES

The extent to which the new insolvency framework encourages the rehabilitation of businesses instead of their bankruptcy is another indicator of its success. As can be deemed from its title, “the Law of Georgia on rehabilitation and the collective satisfaction of creditors’ claims,” the primary objective of the new law is to promote business rehabilitation.

To determine the degree to which the new law achieves its stated objective, we can observe, within the framework of the new law, the proportion of cases initiated under the rehabilitation regime relative to the total number of cases initiated. As of 15 January, the cited figure is 35%, which is higher than the equivalent figure recorded during the same period under the previous legal framework (10%).

Nana Amisulashvili (BRIPA) also calls attention to one of the incentives created in the new law to promote business rehabilitation: “The previous law required a company to fulfill all of its financial obligations during the rehabilitation process. Practice demonstrated that it was frequently impossible because the enterprise lacked the necessary assets and funds. With the approval of the relevant rehabilitation plan and the consent of the company’s creditors, the new law permits that the company fulfills only part of its financial obligations under the rehabilitation regime.”

According to another expert in the field, Nikoloz Abutidze, the new legislation better regulates creditor rights. Previously, the creditors who first approached the court had a greater chance of satisfying their claims, whereas others may have been left without compensation. The purpose of the new law is therefore to satisfy creditors collectively, and this mechanism is much more effective.

The shortened duration of insolvency proceedings is another indication of the new legal framework’s success. Under the old law, legislative mechanisms were often unable to ensure a swift resolution of insolvency cases, and in some instances, the process was drawn out, including during rehabilitation proceedings.

Several innovative tools introduced under the new legal framework speed up insolvency proceedings significantly. Important among these is the binding timeframe, which should not exceed nine months, for approval of a rehabilitation plan. Beyond which, the law also allows for the possibility of converting a rehabilitation regime into a bankruptcy regime. As of 15 January, this possibility of conversion has been utilized in two of seventeen ongoing bankruptcy cases.

It is notable that the majority of cases resolved during this period were not regulated under the new law, and certain cases under the old law lasted a considerable amount of time. For instance, one case completed at the end of 2022 began in 2002, which, compared to previous years, resulted in a significant increase in the average duration of cases completed in 2022.

The vast majority of completed cases regulated within the new law have been carried out under the rehabilitation regime, with an average duration of 8.6 months or 0.72 years. 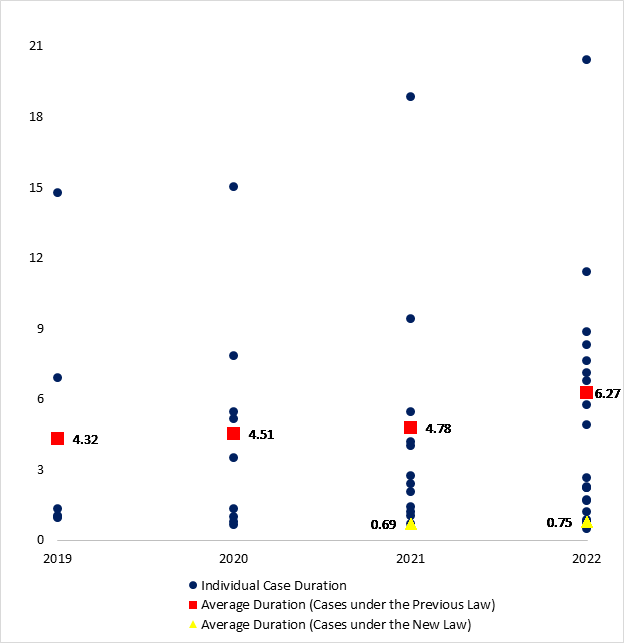 The numbers indicated demonstrate that the binding timeframe for approval of rehabilitation plans introduced under the new insolvency law has sped up firms’ rehabilitation time notably. However, this does not reflect the full effect of the new law on reducing the duration of insolvency proceedings as 17 bankruptcy cases are still ongoing. Thus, we will be able to observe their duration more accurately as time passes.

On the basis of the presented indicators, it is already possible to assess the impact of the new insolvency legal framework, and which should serve as the basis for optimistic forecasts. The number of businesses requesting initiation of insolvency proceedings is gradually rising. Under the new law, the proportion of rehabilitation cases in overall initiated cases is greater than under the previous law; and lastly, the average duration of completed insolvency cases initiated under the new law has decreased markedly.

Nevertheless, despite the positive dynamics observed, we cannot fully assess the effects of the insolvency reform on the basis of the indicators presented. In regards to each of these indicators, the true impact of the reform should become more apparent over time. Given the increased awareness of the business in general and small businesses in particular, it will be interesting to discern to what extent the court filing rate will increase. The stability of the high proportion of cases initiated under the rehabilitation regime is equally notable. Finally, it becomes pertinent to examine how the average duration of concluded insolvency cases under the new law will vary in light of ongoing bankruptcy cases.

In order to fully assess the effect of the ongoing insolvency reform, it is also crucial to observe certain additional indicators that are not currently measured in Georgia. According to the 2019 regulatory impact assessment on the draft of the current insolvency law, such indicators include creditor recovery rate (%), the post-insolvency value of assets relative to insolvency mass (%), and insolvency proceedings costs (% of insolvency mass).

DISCLAIMER: This blog was made possible with the support of the American people through the United States Agency for International Development (USAID). The contents of this blog do not necessarily reflect the views of USAID or the United States Government.

Tags: #blog, #mediator, #insolvency, #reform, #business, #private sector, #law,
The views and analysis in this article belong solely to the author(s) and do not necessarily reflect the views of the international School of Economics at TSU (ISET) or ISET Policty Institute.