The latest impact of Gavrilov’s visit to Georgia has fueled societal concerns about the economic consequences of deterioration in Russo-Georgian relations. For instance, due to the Russian government’s decision to cancel flights to Georgia, residents are beginning to worry about potentially adverse economic impacts on the tourism sector. ISET-PI has already discussed the expected impact of such a change, highlighting how these concerns might be unwarranted, as tourism accounts for 7.6% of the GDP, with Russian tourism contributing only 1.8% to the economy.

In this article, we are going to discuss the potential risks of deteriorating Russo-Georgian relations from another perspective- the latent impact on the electricity market. It is important to highlight that in recent years, Georgia has reverted from being a net exporter of electricity to a net importer, with shrinking exports and increasing imports. Therefore, one may expect the greatest impact on the Georgian economy to derive from the import side. Another important factor is that part of internally generated electricity is produced by Thermal Power Plants, which consume imported gas. Thus, an assessment of vulnerabilities in the electricity sector affected by the worsening Russo-Georgian relationship must focus on the import side, studying both the sources of electricity and gas import. To be wholly comprehensive, we will also briefly discuss the recent trends in electricity exports.

One can see from Figure 1 that internally generated renewable resources historically constitute, by far, the largest contributor to the electricity supply. Nevertheless, the role of imports and TPP generation remains considerable and, consequently, the trends characterizing these electricity sources are worth exploring in further detail. 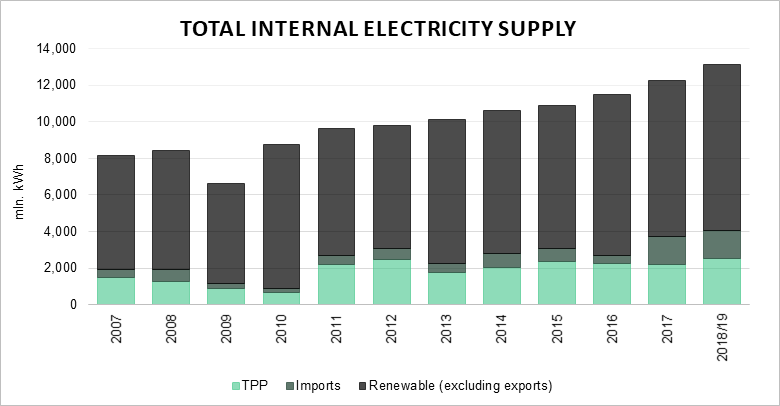 Between 2007-2017, total electricity imports amounted to 6,598 mln. kWh, satisfying on average 6% of the total supply. While, on average of total imported electricity, 76% was provided by Russia, 18% was supplied by Azerbaijan, while the remaining 6% was imported from Turkey and Armenia. The total supply of imported electricity from Russia and Azerbaijan represented on average 4% and 1%, respectively, between 2007-2017. Until 2017, this data points to a historical dependence on Russia, whenever internal generation was insufficient to satisfy internal demand. 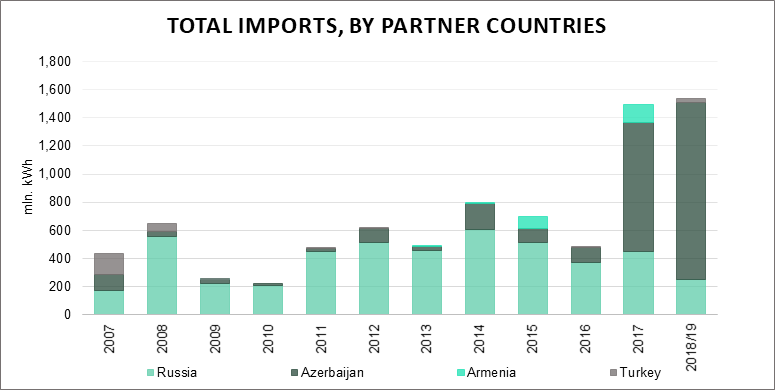 Within the last twelve months (June 2018 to May 2019), however, the pattern has been quite different (the reversal of this trend appears to have started in 2017). In Figure 2, one may note that total electricity imports increased to 1,537 mln. kWh, satisfying 12% of the total supply. While 1,259 mln. kWh of electricity, representing 82% of total import and 10% of total supply, originated from Azerbaijan. Whereas, electricity imported from Russia amounted to just 250 mln. kWh, at 16% of the imported electricity and 2% of the total supply (down from 4% between 2007-2017). Therefore, despite an increase in the proportion of total resources covered by electricity imports, Georgian dependence on Russian imports has declined.

As previously mentioned, a further source of vulnerability for the Georgian electricity sector is due to gas imports for TPP generation. Historically, shown in Figure 1, TPP generation has covered approximately 19% of the electricity supply (during the last twelve months). However, the current trends appear fairly reassuring. A very recent document reveals that the Georgian natural gas balance of just 0.2% of the total gas supply appears to come from Russia (via an agreement with Gazprom), while the remaining supply is imported from Azerbaijan and other sources.

Nonetheless, this does not signify that the country is without energy security issues. Moving away from Russia has significantly increased Georgian dependency on Azerbaijan, the long-term consequences of which are yet unclear. A prudent energy policy should attempt to further diversify (and expand) the range of import options for both gas and electricity, as well as to better develop self-sufficiency by promoting investments in local energy sources, particularly renewables.

From the export perspective, Georgian exposure to Russia has been characterized by a declining trend. Between 2007-2017, electricity exports amounted to 7,938 mln. kWh (with an average of 721.6 mln. kWh per year). On average, 54% was exported to Russia, 32% to Turkey, while the remaining 15% was exported to Armenia and Azerbaijan. Over the last twelve months, however, Georgia has exported just 461 mln. kWh of electricity, out of which 64% was exported to Turkey, 15% to Armenia and Azerbaijan, and just 21% to Russia. In monetary terms, using Geostat data, the value share of electricity exports from the total value of GEL exports reached a peak of 2% in 2010 but was just 0.6% in 2018. 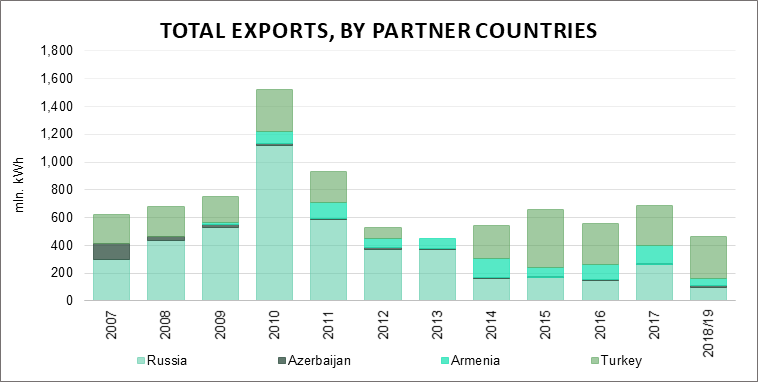 Thus, even more so than for imports, it is not anticipated that the Georgian economy will suffer any significant negative impacts from a possible reduction in exports to Russia. Rather, the main foreseeable costs are lost opportunities from mutually beneficial initiatives, for example through greater integration between the power sectors of neighboring countries. Just weeks ago, there was a joint working meeting of Georgian, Azerbaijan, and Russian transmission system operators, in which they discussed the possibility of combining their power systems to support electricity trading and to improve power quality and reliability in each country. Such initiatives will therefore become less likely in the aftermath of recent events.

In conclusion, Russia’s current impact on the Georgian energy sector is not significant, and although it is clear that deterioration in Russo-Georgian relations is undesirable, the expected short-term impacts on the electricity market, and thus the Georgian economy, are unlikely to be dramatic. Equally, considering the trends characterizing the Georgian electricity sector, it is important to highlight the continued promotion of investments in internal generation capacity (with a focus on renewables), diversification of the energy import mix, and development of mutually beneficial cooperative initiatives at the regional level.

Tags: #russia, #georgia, #energy, #electricity, #import,
The views and analysis in this article belong solely to the author(s) and do not necessarily reflect the views of the international School of Economics at TSU (ISET) or ISET Policty Institute.