Enguri HPP Is Closing While Demand on Abkhazia’s Side Keeps Growing: Challenges and Opportunities for The Georgia’s Electricity Sector at the Beginning Of 2021
Home ISET Economist Blog

According to the last four years’ data, Georgia has a chronic electricity deficit in ten months out of twelve, with the country showing an electricity surplus only in May and June (and, occasionally, in April and/or July). Despite the COVID-19 crisis dampening electricity demand in the country, 2020 was no exception. After two months – May and June – characterized by a positive generation-consumption gap, starting from July 2020 Georgia has been generating less electricity than required to cover consumption.

To fill this deficit, Georgia imported energy from Azerbaijan, Russia, and Turkey. Considering the depreciation that has been hitting the national currency, imports have become increasingly costly in GEL. If Georgia wants to lower energy expenditures and be energy independent from other countries, while working to increase energy efficiency, it needs to increase its energy generation potential. The rehabilitation of the Enguri hydropower plant (HPP) can significantly contribute to this cause.

According to Levan Mebonia, Chairman of the Board of Directors of Enguri HPP Ltd; every year, water that could allow the generation of an additional approximately 250 million kWh of electricity is being lost from the tunnels because of leaks since the 1st, 2nd, and 5th turbine pipelines are damaged. After the rehabilitation, which will last three months (mid-January to mid-April), these leaks will be partially eliminated and the HPP is expected to generate an additional 100-120 mln kWh of electricity yearly.

The Ministry of Finance has prepared a report about the costs and benefits of the Enguri HPP’s rehabilitation, which states that the project will cost  96 mln GEL. However, after the rehabilitation, HPP maintenance costs are expected to be halved, and the expected profits from this project over a 15-year period amount to 264 mln GEL.

Figure 1 shows the energy generation by Enguri HPP and other generation sources, as well as total energy consumption in the period from January to April over the last 5 years. One can notice that in this part of the year, as mentioned above, Georgia has historically had a negative generation-consumption gap in the electricity market, forcing the country to import electricity to satisfy the excess demand. In addition, the chart demonstrates that the Enguri HPP contributes a significant amount of energy to total generation. During the rehabilitation when the HPP stops operating, total energy generation is expected to decline by about 300 mln kWh over the entire period.

HOW HARD WILL THIS BE FOR GEORGIA?

In winter, the energy generated by Enguri HPP is almost solely consumed in Abkhazia. So, the rest of the Georgian regions should not be significantly affected by the HPP’s closure.

From the Abkhazian perspective, however, this is a much more concerning development. The Government of Georgia (GoG) and the Government of the separatist Abkhazian region operate within the framework of an informal 1997 agreement, according to which Abkhazia is entitled to consume 40% of all energy generated by the Enguri HPP, with the rest (60%) being reserved to be consumed by the rest of Georgia. However, in recent years Abkhazian consumption has been steadily rising, reaching a consumption level equal to almost 100% of the HPP’s energy in winter and 55-60% in other seasons. The situation in the January-April period is the most critical. Starting from 2015, during the January-April period Abkhazia has been consuming significantly more than 100% of Enguri’s generation and, in three out of the last four years (2017, 2019, and 2020), more than the electricity generated by Enguri and Vardnili HPP combined (Figure 2).

Figure 2. Enguri and Vardnili generation and Abkhazia consumption in Jan-Apr 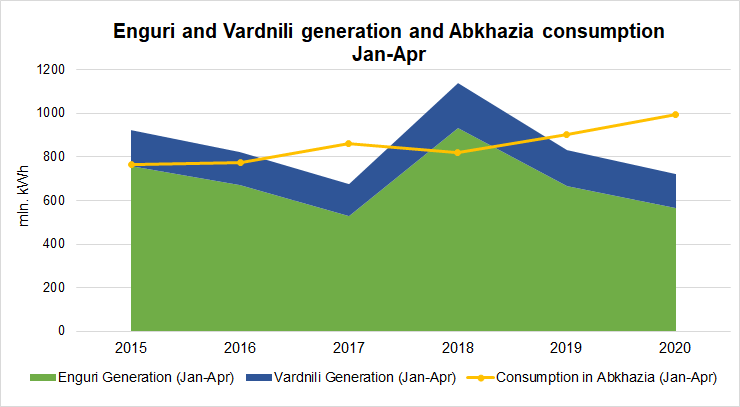 To cover the deficit, Georgia has been purchasing electricity, usually from Russia, and redirecting it towards Abkhazia. The main factor behind the increasing trend in Abkhazian consumption is the low price of electricity in the region compared to the rest of Georgia; where Telasi prices range between $0.04-0.07 per kW, the Abkhazian population enjoy significantly lower electricity prices at $0.0063 per kW. This stimulates inefficient energy consumption and increased demand from:

a) Households and companies: due to the relatively lower prices of electricity, the population in Abkhazia has little incentive to increase the efficiency of their energy consumption. On average, an individual residing in Abkhazia consumes about four times more energy than an individual residing in other regions of Georgia, leading total Abkhazian electricity consumption to slightly exceed that of Tbilisi, which has almost five times the population and is far more technologically developed.

b) Crypto mining: as the main input needed for crypto mining is electricity (for processing power and cooling processors) low energy prices significantly increase crypto mining’s profitability. According to some estimates, crypto mining consumes a third of all electricity in Abkhazia. Abkhazia’s decision-makers tried to disincentivize mining by increasing electricity tariffs for crypto miners to $0.02. However, the situation did not change much because only 20% of all crypto farms operate legally. The rest of the farms use virtually free energy.

According to Natia Turnava, Minister of Economy and Sustainable Development, the upcoming Enguri HPP rehabilitation will leave citizens residing in the Abkhazian territory without the aforementioned free Georgian supply. This implies that they will have to acquire it from the Russian Federation at a significantly higher price. Due to this development, the self-proclaimed government of Abkhazia decided to tighten the regulations against crypto mining. The prohibited crypto mining until the 1st of June, and banned imports of equipment for crypto farms. In addition, the population is now receiving electricity by schedule. During the day, there are hours during which electricity is not supplied to the general populace, affecting negatively people’s day-to-day lives.

These prohibitions may temporarily attenuate the energy consumption problem in Abkhazia, even though they will not eliminate it completely. For a permanent solution to the electricity consumption problem, Abkhazia’s decision-makers should, first, ensure that fees are set at a higher level, and second, take care of the fee collection problem. As the director of technical operations for Chernomorenergo, Ruslan Kvarchia claimed, only 54% of electricity fees are collected. In previous years, the Georgian government offered to install meters in Abkhazia. However, Abkhazia’s decision-makers declined the offer.

As mentioned above, after the rehabilitation of the Enguri HPP is finished, it will generate 100-120 mln kWh more electricity, which should narrow the energy gap between consumption and generation. In addition, as the increased flow of filtration water will be eliminated, energy consumption for the operation of the pumps will be reduced. Vehicle operating costs will also be reduced. However, we cannot be sure that the recent regulations in Abkhazia will last after the Enguri HPP becomes operational again. It is possible that after the HPP starts to generate energy as before its closure for rehabilitation, Abkhazia’s decision-makers will revert to policies that incentivize inefficient practices in terms of electricity consumption. In this case, Abkhazia might quickly consume this additional electricity and further exacerbate its energy security issues, along with the rest of Georgia’s.

To help prevent Abkhazia’s inefficient electricity consumption in the future, the government of Georgia might want to consider promoting an updated agreement establishing clearly that Abkhazia will need to pay a market price for electricity consumed beyond the amount agreed in 1997. In addition, as the dangers of the status quo have now become clearer to Abkhazia, the Georgian government could reiterate its offer to help install meters in the Abkhazian territory.

Ultimately, whether or not the rehabilitation project will have long-term benefits or will be just a one-off gain will depend on whether or not—and if so, how — the Georgian government and the self-proclaimed Abkhazian government will take this chance to update the 1997 informal agreement in a way that benefits both sides.

Tags: #electricity, #energy,
The views and analysis in this article belong solely to the author(s) and do not necessarily reflect the views of the international School of Economics at TSU (ISET) or ISET Policty Institute.