Few elections in recent years were watched as carefully around the world as the Georgian parliamentary elections. And few political and economic observers shunned the opportunity to interpret its stunning outcome. The majority view, so it seems, is that Georgia passed a “litmus test for democratic governance” (Ariel Cohen of the Heritage Foundation). A few others, however, consider the victory of Bidzina Ivanishvili’s coalition as the end of the “Georgian experiment” which, according to them, was about combining radical economic reforms and universal suffrage (Yulia Latynina of Russia’s main opposition newspaper Novaya Gazeta).

The interest in Georgia and the “Georgian experiment” is not incidental. For the last 8-9 years, Georgia has been embracing a strategy of economic reforms that set it apart from all other splinters of the Soviet empire as well as most developing countries around the world. Georgia tried to grow from a very low starting point by ruthlessly eradicating cronyism and corruption while simultaneously building democracy and liberalizing its economy. And, surprise, surprise, this strategy seemed to work.

Georgia’s success was carefully watched and scrutinized because, during the past several decades, development and fast economic growth have become firmly associated with “authoritarianism”, “protectionism” and “currency manipulation”. The Chinese model, for short. At least prima facie, Georgia provided an alternative: growth through enhanced political and economic freedoms.

To fully appreciate Georgia’s uniqueness it is worth considering this: between 1991-2005 (the first year of Saakashvili’s administration) economically free countries that repressed political freedoms (e.g. China, Malaysia, Singapore, and Russia) grew almost three times faster than countries that embraced both economic liberalism and democracy (most developed countries). While the numbers below are not mathematically precise (they are based on rather subjective ratings of economic and political freedom compiled by Freedom House and Canada’s Fraser Institute), the general trend is undeniable. Economically free dictatorships have grown faster! 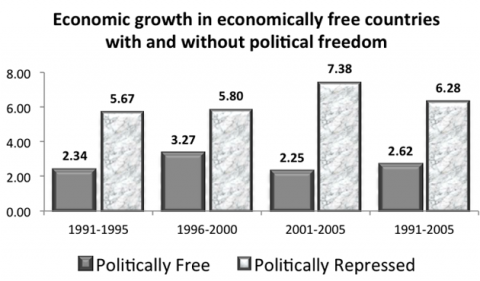 Opponents of democracy have used these and similar data to argue that new, poorly institutionalized democracies easily succumb to populist demands for immediate consumption, engage in excessive redistribution at the expense of profitable investments, and fall prey to the interests of rent-seekers. Democratic governance was also said to be prone to social and ethnic conflict, procrastination, and the inability to mobilize resources and get things done.

THE ROLE OF DEMOCRATIC CHECKS AND BALANCES

While Georgia’s success at fast economic growth (averaging more than 6% during the past 10 years) and modernization is undeniable, Georgia was able to avoid the pitfalls of a new, poorly institutionalized democracy because … it was not a democracy in at least one key aspect. It completely lacked a system of checks and balances that limits the power of the executive branch of government and forces compromise as the main way of political and economic decision-making. Georgia is certainly a success story as far as economic reforms are concerned, but not a 21st-century miracle. At least, not yet.

About a year ago we analyzed the extent to which democracy has taken root in the former USSR space (see 20 Years of Transition from Nowhere to No Place blog post). To assess democratic transition in the ex-Soviet states, we calculated an index analogous to the one used by economists to study market competition. Instead of market shares, our Political Monopolization Index (PMI) uses the shares of seats held by political parties in the national parliaments. It takes the value of 1 for single-party “democracies” and a relatively low value for parliaments populated by many parties of roughly equal size. To provide a benchmark, we added a few randomly selected Eastern European countries.

A note of caution: our index does not cover all aspects of democratic transition. In particular, it flatters to such “democracies” as Uzbekistan and Russia, where a semblance of political competition is carefully maintained by the ruling elites through the creation of “pet party projects“ (e.g. the short-lived Pravoe Delo in Russia). Likewise, the index ignores the quality of Georgia’s formal democratic institutions, and the ability of its civil society to mobilize itself and generate democratic change. Yet, Georgia’s 2011 position on this ranking, between Tajikistan and Belarus, speaks volumes about its perhaps overzealous young rulers’ unrestricted ability to build, implement reforms, and get things done.

If you wish, call it a dream, but what we are likely to see in the next few years is not the end but rather the beginning of the Georgian experiment.  An experiment in combining a growth-oriented strategy with a truly democratic governance system – wrought with procrastination, public discussion, and debate.

Success is certainly not guaranteed, but the experiment is probably worth trying. Georgia deserves a system of governance that provides citizens with a sense of dignity, not often experienced in our part of the world.

Tags: #politics,
The views and analysis in this article belong solely to the author(s) and do not necessarily reflect the views of the international School of Economics at TSU (ISET) or ISET Policty Institute.