Starting from October 15, Georgian consumers have to pay about 5-10 tetri more for one loaf of bread. Many large producers increased their prices; smaller bakeries (“tone”) followed suit by either raising the price or reducing the weight of the traditional Georgian bread. While unpleasant, this change in the price of bread is nothing but a forced reaction to a sharp increase (25%) in the price of wheat in the global commodity markets dating back to July 2012. The question, therefore, is not why bread and flour prices increased. Rather, it is why these politically sensitive prices increased only now, with a three-four month delay.

This is the right question to ask because, like other small economies, Georgia relies on imports to provide many basic commodities, including wheat, rice, sugar, soya beans, etc. Typically, any changes in the prices of these commodities are very quickly passed onto food prices in Georgia. For instance, global wheat prices were on a downward trend from May 2011 till May 2012, triggering a parallel reduction in the domestic prices of wheat and flour (see chart). For much of 2010 and early 2011, we have seen the global and domestic wheat prices dancing tango in the opposite direction, reaching a peak in May 2011.

This parallelism came to an abrupt end in June 2012. Global prices shot up by more than 30%. Domestic prices stayed put. Until October 15. 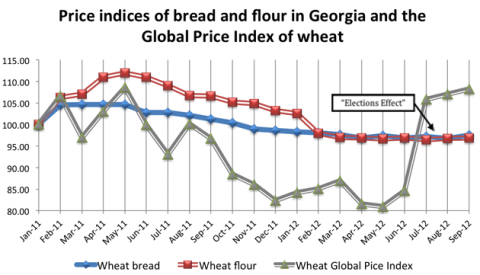 What happened? How could producers resist the global price increase until October 2012? Has there been any fundamental change in the Georgian wheat market?

No, there wasn’t any.

Georgia currently imports about 70-80 thousand tons of wheat and flour every month, providing about 80% of total consumption. If anything, in the three months since June, Georgia has become ever more dependent on imports of wheat and other commodities as a result of unprecedented growth in tourism. For instance, wheat imports reached more than US$32mln in August compared to US$16mln in January 2012 (increasing from 3.3% to 4.7% of total imports).

One possible explanation of this puzzle is related to the theory of so-called “Political Business Cycles” (PBC) in economics. Economists have long observed the tendency by incumbent governments to “stimulate” the economy just prior to an election. Such politically motivated “stimuli” produce popular results in the short-run (new roads and bridges, public sector jobs, price reductions, tax cuts, etc.). Yet, if pursued to excess, these very policies may have very unpleasant consequences such as inflation, accumulation of public debt, or depletion of foreign currency reserves. Needless to say, the task of cleaning up the Augean stables – rebalancing the economy and fixing bridges built to an election deadline – typically falls to the new government. Hence the rationale for the PBC, and the boom-and-bust pattern they induce.

Tags: #agriculture, #elections, #prices,
The views and analysis in this article belong solely to the author(s) and do not necessarily reflect the views of the international School of Economics at TSU (ISET) or ISET Policty Institute.