Giving women voice in company management may prove beneficial for performance. For instance, according to an influential Catalyst report, The Bottom Line: Corporate Performance and Women’s Representation on Boards, “companies that achieve [gender] diversity and manage it well attain better financial results, on average, than other companies.” In particular, they find that firms with the most women board directors outperform those with the least on such indicators as return on sales (ROS), return on equity (ROE), and invested capital (ROI).

While the Catalyst focused on the role of women in the governance of very large (Fortune 500) companies, women are also known to be a leading force in microfinance. Founded by Muhammad Yunus to provide Bangladesh's poor with microloans, Grameen Bank’s lending operations were heavily biased toward women – 97% of all credit recipients were female. In her 2013 book Twenty-Seven Dollars and a Dream, Katharine Esty argues that women are comparatively better at exploiting small loans than males. While men tend to waste at least some of the money on alcohol and tobacco, women use it for investment (in farm animals, etc.), resulting in better outcomes (revenue from agricultural activities, ability to repay the loan, improvement in personal hygiene and health).

If all this is true for Bangladesh, where, according to the CIA World Factbook, 47% of the labor force is employed in agriculture, why should Georgia be any different? It is therefore quite disconcerting that the role of female leadership has so far been overlooked in Georgia’s agriculture. For instance, females are only one-fourth of the membership in agricultural cooperatives that have been registered over the past couple of years by the Georgian government. Many of these are supported by the European Neighbourhood Programme for Agriculture and Rural Development (ENPARD) Initiative which seeks, among other things, to promote the livelihoods and productivity of Georgian smallholders. But, can this mission be successfully accomplished without fully engaging Georgia’s heroic women?

WOMEN IN AGRICULTURE, AROUND THE WORLD, AND IN GEORGIA

It is well established that women play a key role in the agricultural and rural economies of developing countries. Rural women manage a myriad of household and farming activities including housekeeping, food processing, caring for animals, producing and marketing agricultural crops. While these activities do not count towards “economically active employment” in the formal (statistical) sense of the term, they significantly contribute to the wellbeing of rural households (FAO, 2011).

Georgia is no exception to this rule. Formal statistics may show that men have a leading role in the agricultural sector, but Georgia’s reality looks quite different. A recent study by Mercy Corps documents the seasonal routines undertaken by rural women in the Samtskhe-Javakheti region. All year round, women look after the animals, including pigs, chickens, and milking cows. In spring, women help men in land preparation and cultivation, while also being actively involved in summertime weeding, hoeing and irrigation. In autumn, women help with harvesting.

Additionally, after the harvest season is over, women make preserves by pickling, drying, and processing fruits and vegetables. Most importantly, they are the ones to take farm products to the market and have quite a bit of independence in deciding how to reinvest the money or use it for current family needs.

A recent survey ISET undertook in Western Georgia finds that there is only a tiny difference between the percentages of men and women involved in different farming activities (see table). Possible exceptions are the application of chemicals and transportation. 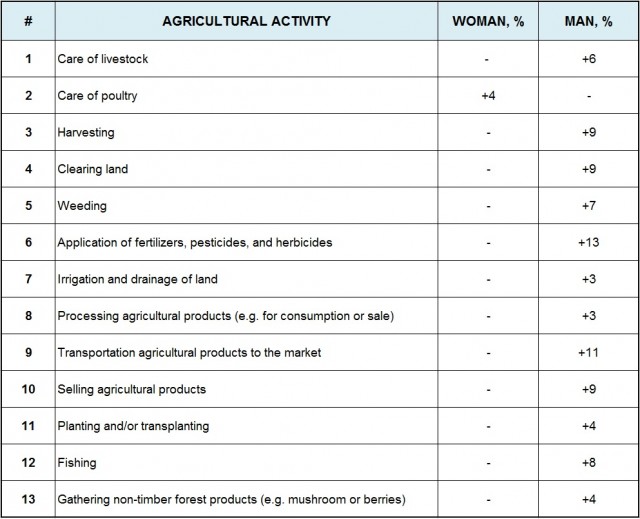 What this data mask, however, is that farming activities limit, if not completely eliminate, the leisure time of rural women in Georgia. Georgian men also work full time on their farms, yet they tend to specialize in seasonal works (ploughing, planting, harvesting, hay production, etc.), leaving all housekeeping chores and childcare to the women: their mothers, wives, and daughters.

Rather symbolically, the Georgian term for ‘ploughman’ is gutnis deda, or ‘plow mother’ (gutani is Georgian for plough and deda for mother). According to a Caucasian myth in which this language originates, the ploughman was actually a woman driving a pair of plough bulls. This tradition is still alive in the Georgian highlands, e.g. in Tusheti. While men are herding the sheep, women would take over most other responsibilities, including ploughing.

As noted by the French historian Fernand Braudel, the roles of men and women in an agrarian society depend on the dominant farming technology. A key distinction is typically made between communities that adopt the heavy plough (which requires upper-body strength) and those that use the hoe. Moreover, there is empirical evidence (see Aleina, Nunn, and Giuliano (2012)) that ancient agricultural methods have very enduring effects. For instance, women who are descendants of plough-users (as opposed to hoe-users) tend to work less outside of their homes.

The plough was not as prevalent in Georgia’s ancient agriculture due to its mountainous relief. Not only linguistic analysis, but also ancient traditions suggest that Georgian women were extremely important in the country’s agriculture. In Georgian villages, the beginning of the tilling season used to involve unique rituals and preparations in which women played a key role. In Tusheti, women would start by digging out a bit of soil to “wake up the land”, and light candles on the right horn of the bull. Women also baked a triangular khmiadi (unleavened bread), a small piece of which was fed to the bulls. In some places, the bulls would be led into the fields by a pregnant woman – a symbol of fertility (Sikharulidze, 2014).

Georgian agriculture has also gone through a process of technological change, triggering, among other things, a gradual masculinization of the ‘plow mother’ profession. This change was more pronounced in the lowlands, where the heavy plough was particularly useful. Yet, Georgian women continued to play a key role in Georgian agriculture and society. Too often in Georgia’s turbulent history men were called upon to defend (and die for) their homeland, leaving it up to the women to produce food, raise children, and, ultimately, ensure the Georgian nation’s survival.

Despite the active role women play in agricultural production, their rights to employment and subsequent managerial decisions are questioned in those very Georgian communities that specialize in agriculture. For instance, according to a baseline survey, ISET conducted last year in Abasha, Senaki, Khobi, Tsageri, Chokhatauri, Lanchkhuti, and Ozurgeti as part of the ENPARD project (ISET participates in the CARE-led ENPARD consortium), 63% of rural Georgians think that “when jobs are scarce, men should have more right to a job than women.”

According to the 2013 count by GeoStat, the number of male-headed households is approximately twice as high as women-headed households in Georgia’s rural areas. Less than one third (about 30%) of Georgian farms were headed by women in 2012, 2 percentage points less than in 2009. Thus, instead of advancing, we are going back.

There could be many ways to promote women to positions of decision-making and influence in Georgian agriculture and society. A good place to start is education and vocational training. There is considerable experimental evidence that, in traditional male-dominated societies, women typically shy away from the competition. The result is a gender gap in educational attainment and labor force participation, which is exacerbated by a negative male attitude towards female labor force participation (“the woman should stay at home”). The same body of research, however, suggests a number of effective ways to boost women’s aspirations and professional qualifications.

For instance, female enrollment rates can be increased if one simply informs them about expected returns to vocational training. In a fascinating study, Beaman, Duflo, Pande, and Topalova (2012) report how female leadership can change young women’s perceptions. In (randomly selected) villages where young women had an opportunity to observe female leaders as role models the gender gap in aspirations was reduced by one quarter and the gender gap in educational attainment was completely eradicated!

It goes without saying that donor-financed projects, such as ENPARD, could greatly benefit by incorporating lessons learned from state-of-the-art development research on gender mainstreaming. For instance, female participation in the coop movement could be boosted by evidence on the success of women-led farms and farmer organizations. Women could be targeted with scholarships to acquire relevant managerial skills. Finally, female participation in the governance of coops could also be made a criterion for technical support and grants.

Hopefully, Georgia will once again find the ways to utilize the power of its gutnis dedas to the benefit of all. In the end, this is about changing existing stereotypes, which will require a broad and well-coordinated educational effort of which ENPARD cannot be but a small part.

Tags: #enpard, #gender, #farmer cooperatives, #agriculture,
The views and analysis in this article belong solely to the author(s) and do not necessarily reflect the views of the international School of Economics at TSU (ISET) or ISET Policty Institute.