If Moscow Can Beat the Traffic, So Can Tbilisi!
Home ISET Economist Blog

When I left Russia back in late 2006, attempting to cross a busy Moscow street bordered on suicide. Instead of slowing down before a zebra crossing, Russian drivers were in the habit of accelerating so as to signal their intention NOT to stop. Understandably, pedestrians had no choice but to adjust their street crossing strategies accordingly. The result was what an economist might call a “bad” equilibrium. Moscow drivers would not even consider letting pedestrians cross. And pedestrians would not even try.

When visiting Moscow for the New Year holidays just a few weeks ago, I was astonished by the dramatic makeover of traffic arrangements and the culture of walking and driving in Moscow’s city center. To make sure this was not some kind of Fata Morgana, I asked my 11-year-old son Jan to repeatedly cross the three-lane Moscow boulevard ring with me shooting him on video.

Now, if Moscow can, why cannot Tbilisi achieve the same feat given its fantastic record in other reform areas? Georgia was the first country in the former Soviet space (other than the Baltic countries) to clean up its police and bureaucracy from corruption. Why cannot we transform the hell that is Tbilisi traffic into something more civilized, something befitting a country aspiring to be a part of Europe?

The answer is very simple. Georgia has lots and lots of civil society “organizations” generously supported by EU and US funds. What it lacks, however, is genuine civil society activism at the grassroots level. Georgia has an exceptionally well-trained, professional, and clean police force. What it lacks is the political will to engage this police force in actually enforcing the law. 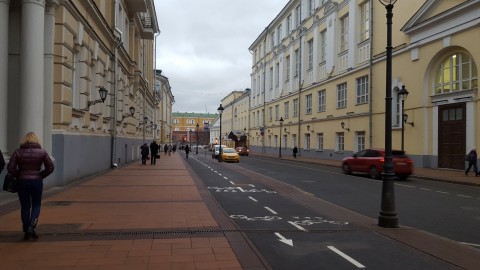 Things finally appear to be changing in Georgia. The Georgian government is preparing a series of measures to improve the road safety situation. In parallel, an excellent social movement, Iare Pekhit (“move on foot”) was launched in 2012 to bring together Georgian and ex-pat activists who care for Tbilisi city’s pedestrian issues, and in this way drive the change we all desperately need and want.

On January 26, 2016, ISET hosted a meeting among Iare Pekhit and our students, faculty, and staff. This meeting is a part of a string of lectures, debates, and video screenings through which Iare Pekhit is trying to inform and mobilize the community in order to reclaim our urban space and force the City Hall to get its act together.

One option to be considered by Tbilisi (and is already implemented in Moscow) is to “green” Georgia’s urban transport. Among other things (e.g. electrical vehicles), this is also about creating better possibilities for walking and … biking around Tbilisi. For instance, Uli Kindermann who will be speaking at ISET on behalf of Iare Pekhit this week is promoting an initiative to map, mark, and improve cycling routes as part of a larger national program to promote “sustainable urban mobility”. Such a program would go a long way in improving our fitness and the quality of the air we are breathing.

While getting Georgian “khinkali men” to bike to work may be a real uphill battle, getting them to stop at pedestrian crossings should be a piece of cake. As Moscow’s experience shows, it should not take more than a month of rigorous enforcement complemented by an awareness campaign. Stopping at red lights and zebra crossings is not a matter of reckless “dzhigit” culture, but of shifting from a “bad” equilibrium (in which Moscow had been stuck until a few years ago, and in which Tbilisi is stuck to this date) to a “good” one in which pedestrian rights are fully respected.

Not convinced? Read the next section.

The first relevant insight from Game Theory is that the behavior of traffic participants is determined by their expectations about the behavior of other actors. For instance, if pedestrians do NOT expect drivers to stop at a zebra crossing, they will hesitate to cross until they are 120% sure that the car approaching them is actually going to stop. Given the very steep price for making a judgment mistake, it would take intensive hand waving and actual stopping by the polite German drivers among us for a typical Georgian pedestrian to understand our intentions and adjust their expectations accordingly.

The same logic applies to the behavior of drivers. Any driver familiar with the Tbilisi rules of the game would not slow down before a zebra crossing because it makes no sense. Pedestrians would in any case not trust his/her intentions and would patiently wait for the car to pass (or stop, in the rare case it is driven by a foreigner like myself). Moreover, it makes sense for a Tbilisi driver to speed up whenever he or she observes a group of pedestrians getting ready to cross the road on a zebra. Why? Because by speeding up s/he sends a clear signal about his/her behavior – hey, I am not going to stop, don’t even try crossing!

The second key insight from Game Theory is that this kind of “uncivilized” outcome (drivers not giving way and pedestrians not even trying to cross on a zebra) is stable. In other words, it does not make sense for drivers and pedestrians to change their behavior given what they know about the other party’s strategy. The implication is that to get out of this “bad” equilibrium, someone (the policymaker and/or a coalition of civic activists) has to change the rules of the game and reset expectations.

The third relevant insight from Game Theory is that the “civilized” equilibrium – now observed in Moscow and very common in most European and North American cities – is not only possible but is quite stable as well. If drivers expect pedestrians to cross on a zebra, they will start slowing down well before the first pedestrian sets his/her foot on the road. Expecting this type of behavior, pedestrians will not hesitate to cross. This outcome is stable because it makes no sense for German drivers to start behaving Tbilisi-style (they will quickly find themselves behind bars) and there is no point for the German pedestrians to hesitate before crossing.

Thus, what Georgia has to do is implement the obvious and very simple policy solution that has been tried in many places around the world: introduce tougher regulations, higher fines, and stricter enforcement. Importantly, enforcement would have to be particularly strict during a relatively short transition period to allow all traffic participants to properly reset their expectations and behavior. Once expectations are reset, however, the intensity of enforcement (and related costs) could go down quite dramatically because the new equilibrium will be able to sustain itself. At least according to insights from Game Theory.

Tags: #game theory, #traffic, #culture, #law and economics, #georgia,
The views and analysis in this article belong solely to the author(s) and do not necessarily reflect the views of the international School of Economics at TSU (ISET) or ISET Policty Institute.

Luc Leruth
COVID and the City – A Spatial Fracture in Georgia?
The COVID pandemic raises a vast number of questions for economists, though researchers have mostly focused on advanced economies and on the economic ‘scarring’ that the virus has inflicted. Not all, however, as a few economists have been interested in the likely evolution of cities after the pandemic. They observe that some cities, in particular travel hubs, have been epidemic hotspots, while many others, usually smaller, have been reasonably spared. More rural areas have also been less affected, although with strong variation across regions.
Read more

Tamar Sulukhia
May Certain Trends Brought By COVID-19 Be Worth Keeping Post-Pandemic?
The pandemic has taken an enormous toll on human lives and health globally. It has severely impacted the socio-economic state of millions of households, bringing immeasurable human tragedy, paralysis of social connectivity, economic crisis, and, to a certain extent, culture shock.