For the first time in history, the price of Bitcoin broke its highest record (Figure 1) rising above 2,900 USD during the last week of June, 2017. One of the reasons why the market unexpectedly became optimistic about Bitcoin could be the fact that in April, the Japanese government formally accepted1 the cryptocurrency as a mean of exchange, which gave it more validity in Asia’s richest economy. Moreover, there has been significant growth of international money transfer services that use Bitcoin in order to move currency from one country to another.  An additional interesting turn of events is the broad acceptance of Bitcoin in the U.S. 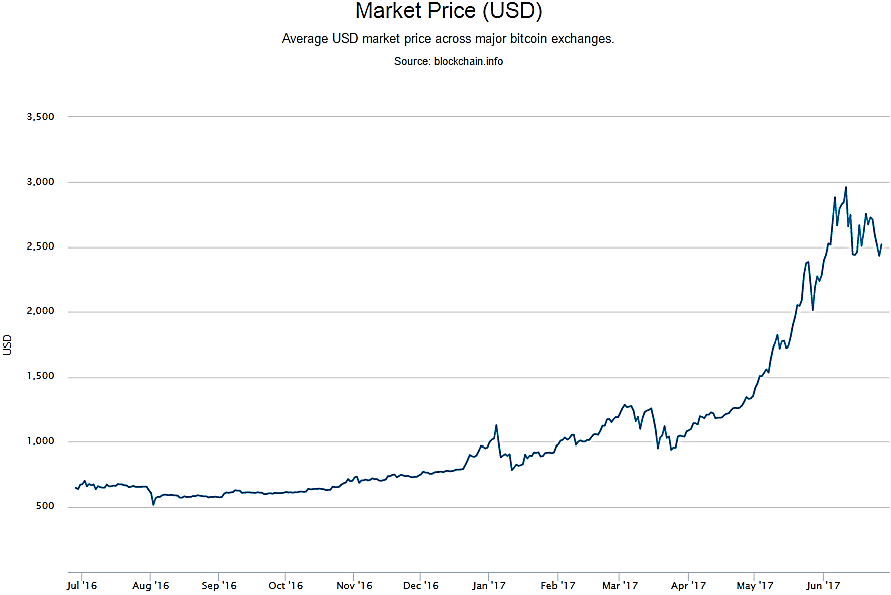 For example, in the educational sector, the University of Ohio is hosting classes about Bitcoin and other cryptocurrencies as a part of its curriculum. Likewise, some colleges have begun to accept Bitcoin as a means of payment. The recognition of digital currency has already led to some companies thinking about profitable investment opportunities in Bitcoin, which fuels its journey to the mainstream. But, before going in deeply and analyzing the dynamics of the market, first let’s find out what Bitcoin is and how it works.

Bitcoin is a cryptocurrency2 that is held and created electronically. It is not under the control of any authority and is not printed like other currencies; Bitcoins are produced by individuals, mostly by business representatives who are running computers (for example BITMAIN blocks)3 using software that deals with mathematical problems. Each block costs 1,220 USD, and on average, one block can earn 0.005 Bitcoins per day. Depending on the current market price, a block can be transformed to a dollar value or any other currency. However, one major question that still has to be answered is how bitcoins are created. As far as mathematical problems go, they are solved during the Bitcoin transaction (Graph 1). The system works as follows: when one person (Giorgi) wants to send BTS4 to another person (Levani), one of the mining blocks that will be the most successful (the first one) will solve the transaction process (mathematical problem) and as a result the miner gets a reward (a specific number of Bitcoins) for the provided service. Technically, Bitcoin is based on the P2P (Peer-to-Peer) network, meaning that the network does not have central administrator unit. In order to sell or buy Bitcoins, you have to set up Bitcoin wallet that will give you an address and personal private key. Transactions between the negotiating (trading) parties is guaranteed by “miners” all over the world who are using mining software to deal with above-mentioned complex mathematical problems, and the corresponding output is the result of a completed transaction between trading partners. Generally, anyone can access the network and become a miner with just some relevant hardware and an internet connection.

Graph 1 – the circulation of information in Bitcoin system 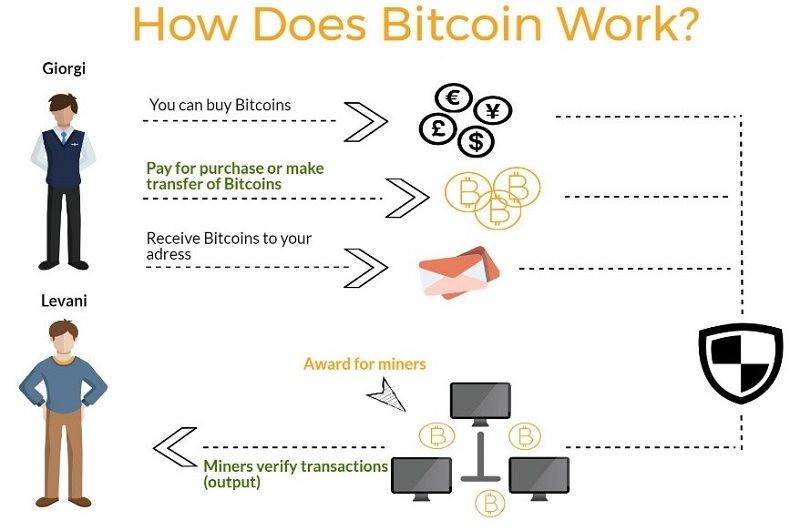 Bitcoin is useful to buy things electronically, as it is like all other currencies that are also traded and exchanged digitally (e.g. Ethereum, Ripple, Litecoin, etc.). Based on price and market share in transactions, Bitcoin is the most successful form of cryptocurrency. Its description was first published under the name Satoshi Nakamoto5 in 2008, and after 20096, there has been open source software for the use of Bitcoin, which was one of the major factors in encouraging the formation of the Bitcoin network. There are no transaction fees, and as already mentioned, the miners who authorize transactions are given Bitcoins as remuneration. Bitcoin value is not attached to any asset or currency, but its value to other currencies is formed according to the supply and demand of the open market. Moreover, it’s also worth noting that the network cannot churn out an unlimited number of Bitcoins, because the network has its own protocol – only 21 million Bitcoins can ever be created by “miners,” but at the same time these coins can be divided into smaller parts (the smallest divisible amount is one hundred millionth of a Bitcoin and is called a “Satoshi”, after the founder of Bitcoin).

Generally, the high growth rate of internet users and the expansion of digital transactions has imposed many limitations on traditional currency and exchange systems. In his article “What are Bitcoins – Pros and Cons, Investment Opportunities” (2014), Michael Lewis argues that currently the limitations include time delays, high expenses and security risks.  Moreover, these limitations become more burdensome when a given transaction involves parties from different countries with different national currencies and with complex products. Hence, the idea of international currency creation in a digital environment (that is independent of a country or central bank intervention) found its advocates in the economy, and the currency started to expand and increase in value. The author also claims that bitcoin has quite a long journey before it becomes a serious substitute for existing electronic transaction systems. Hence, in the period of transition, cryptocurrencies provide real advantages (benefits) and disadvantages (risks) – listed in Table 1 – for users and the economy as a whole.

Concerning the benefits and risks of Bitcoin, the International Monetary Fund released its first report on “Virtual Currencies and Beyond: Initial Considerations” (2016). The report mostly focuses on cryptocurrencies like Bitcoins, and the authors discuss both pros and cons of its existence. According to the IMF report, Bitcoins can generally speed up transactions, lower the cost of remittances, increase financial inclusion, and increase the efficiency of buying securities. But on the other hand, this network also carries a significant amount of risk; for instance, the network could be used to finance terrorism and increase transactions on the black market.

Bitcoin is quite familiar to Georgian society. First, it caught mass attention when Bit Fury7 (one of the leading full service blockchain8 service provider technology companies, operating in U.S., Iceland, London, Amsterdam, Georgia and Hong Kong) set up a data exchange center (for mining) in the city of Gori in 2014, with the support of the Georgian Investment Fund. the low cost of electricity, low taxes, and the sustainable business and investment environment were the most encouraging factors for Bit Fury to enter the Georgian market. Taking into account the benefits provided by the Georgian market, the company decided to build up a second data exchange center in the capital city of Georgia (17 km from the center and close to main airport – located in Gldani). With 100 MW (megawatt) energy capacity, it is greater than the data center in Iceland (1.2 MW) and the data center in Sweden (10 MW). Moreover, the Free Industrial Zone in Tbilisi (which includes preferential taxes9) was one of the driving factors for Bit Fury to open the second data center. The firm invested 100 million USD in the second project and it is the biggest Bitcoin data center located in Georgia. Recently, in collaboration with Bit Fury, the Georgian government came up with an innovative system of registering land titles via private blockchain. This activity was the first time the government used the bitcoin blockchain infrastructure and, since Bitcoin is often associated with illegal activities, this was a good opportunity to improve Bitcoin’s reputation around the country. According to the official representative of Bit Fury in Georgia10, the 100 million USD investment will bring modern information technologies into the country, and Georgia itself will be added to the innovative technologies world map. Taking into account the recent development of cryptocurrency mining in Georgia, one could argue that our country might find a niche in providing technological services in the long run, which in fact might lead to an increase of exported service. At the same time, the Georgian market should maintain a competitive advantage on the global market in order to attract foreign investors.

1 https://www.cryptocoinsnews.com/Bitcoin-in-japan-officially-recognized-in-april-asset-or-expense/
2 A cryptocurrency (or crypto currency) is a digital asset designed to work as a medium of exchange using cryptography to secure the transactions and to control the creation of additional units of the currency. Cryptocurrencies are a subset of alternative currencies, or specifically of digital currencies.
3 Founded in 2013, Bitmain Technologies, described as the world’s most valuable Bitcoin company, was established to develop and sell the world’s leading Bitcoin miners using Bitmain's ASIC chip technology.
4 Bitcoins
5 In November 2008, a paper was posted on the internet under the name Satoshi Nakamoto titled Bitcoin: A Peer-to-Peer Electronic Cash System.
6 On January 3rd, 2009, an anonymous computer programmer (or programmers) going by the name Satoshi Nakamoto mined the first block of the Bitcoin blockchain, kickstarting the world’s first fully realized crypto-currency
7 Full service block chain service includes Bitcoin mining. This kind of mining pools are offering already built blockchain utilities to investors (who are interested in Bitcoin mining). For instance, if you want to mine Bitcoins and do not want to build up your own block (or blockchain) you can pay fixed amount of money to Bit fury and buy the space in the pool. After having your specific number of blocks in the Bit fury pool, you get the corresponding share of Bitcoins.
8 A blockchain is a distributed database that is used to maintain a continuously growing list of records, called blocks. Each block contains a timestamp and a link to a previous block. A blockchain is typically managed by a peer-to-peer network collectively adhering to a protocol for validating new blocks. (source: https://en.wikipedia.org/wiki/Blockchain).
9 For example, companies that produced products for export in the Zone will be exempt from taxes, except lease tax and income tax [on the salaries of employed people].
10 http://agenda.ge/news/48424/eng

Tags: #investment, #private sector, #bitcoin, #cryptocurrency, #georgia,
The views and analysis in this article belong solely to the author(s) and do not necessarily reflect the views of the international School of Economics at TSU (ISET) or ISET Policty Institute.