I believe we all are bound by the notion that technology is the thing. We might be convinced it’s a sign of progress. Those very clever engineers have finally saved humanity, not just by envisioning what will save the masses from wasting their minutes and seconds, but they also help to propel all sorts of time-saving devices. There are, of course, good reasons to argue for how important technological advances are. They can be used as a means of promoting youth employment or to assist an individual suffering from mobility concerns with vacuum cleaning. Or why not launch a space rocket floating around our solar system? Still, I strongly believe that there are some gadgets that we could assuredly live without. The one currently occupying my mind I became aware of while strolling the streets of Tbilisi.

The perks of being newly introduced to a city such as Tbilisi is that you can easily lose yourself strolling down one of the many narrow lanes in the city. They showcase peculiar-looking houses, yards, and gardens filled with all sorts of kits. What also manifests itself is the visibility of newly washed laundry neatly parading on a wire, left outside to dry in the wind. I am not going to gush over the often colorful prints of bed linen or wears but rather point out the frequency of using outdoor air for drying clothes. Something that is not very often on display in cities in Sweden.

Pretty much at the same time as I realized the regularity of this (during chilly December days), the Swedish Energy Agency released the results of a study where they compared methods of drying clothes in the most energy-efficient way. So, what did the study say about the use of appliances?

FINDINGS OF THE SWEDISH STUDY

As can be seen, the most energy-efficient gadget one could use to dry clothes is the tumbler with a heat pump. However, this is not the whole story. Dryers need to be classified as A+ or A++, which tells you how energy efficient it is (currently classification of new tumblers spans from A+++, the most effective, to C, and stretches to D for older ones). It should also be installed with a heat pump within the body of the tumbler, which recycles heat, leading to even more effective use of the heat already circulating within the machine. So, what has this to do with Georgia?

Before I answer what this has to do with the Georgian manner of drying clothes, I would like to refer to a 2014 study conducted by USAID, assisted by AYPEG. The report mapped out household energy use in Georgia.  Surveying 1,081 households, with a more or less equal distribution between rural and urban respondents, interesting themes were raised that exposed attitudes about the use of energy-efficient equipment in dwellings. When asked about energy efficiency, it turns out (maybe not as a surprise for some) that 72 % of the rural and 64 % of the urban interviewees did not know the meaning of the term (Figure 2). 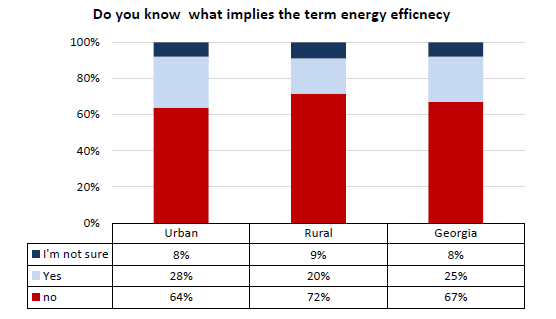 At the national level, 25% of respondents were familiar with the meaning of the term, and about the same number of households used energy-efficient light bulbs for indoor use (Figure 3).

The use of energy-efficient light bulbs is also pointed out in the survey conducted by Geostat (2017) where the use of LED light bulbs exceeds both halogen and tubular fluorescent light bulbs, in terms of absolute numbers. In the USAID study, those who did not have an initial understanding of the term were offered an explanation by the researchers. They gave examples of areas where energy efficiency could be applied, such as the usage of appliances that are marked as energy efficient.

After establishing this, the respondents were asked what energy-efficient workarounds they envisioned in the future. As explained in Figure 4, the central heating system had a slightly higher response than the runner-up, but most interestingly 13.7 % were willing to upgrade to an energy-efficient appliance (USAID, 2014). Obviously, given the earlier response to the question in the report, one could not jump to the conclusion that this has anything to do with tumblers. But it gives a hint that there is not just an existing awareness (27 % used energy-efficient light bulbs), but there also seems to have been some openness to new technology. Especially bearing in mind that of those who did not have a washing machine, 48 % were actually considering buying one within three years. With the right incentives and information, these future customers could as well buy an energy-efficient washing machine, which may have a spillover effect on similar or other household activities, including clothes drying. 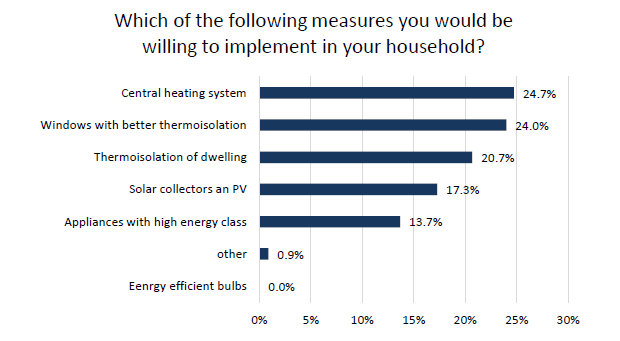 So, let’s go back to what the Swedish report concluded.  Although using a tumbler marked A++ with an installed heat pump could help save energy, relative to other alternatives, the ultimate way of saving energy remains using what Mother Earth keeps providing – sun and wind. Despite all the advanced gimmicks that are on the market, claiming to help us save time while consuming as little electricity as possible, nothing can really beat the old trick of using blustery weather. There are in fact plentiful publications registering the amount of energy and time consumed by household activities. Some specifically discuss what incentives are needed to reduce consumption (e.g. Palm et al 2018, Anderson 2016, Isaksson & Ellegård 2015 and Ellegård & Palm 2015).

My opinion is that the main attraction of tumblers is that they save space as, drawing from my own experience, many people are living in comprised apartments with a minimum of utility space. Thus having a spacious garden or veranda enables families to use the outdoor air to line-dry clothes. Some Swedes are using this procedure as well, although limited to warm seasons. Many others use heated and ventilated laundry rooms or tumbler dryer (or other appliances such as drying cabinets that consumes even more energy, see Table 1). This point is in line with Schmitz & Stamminger (2014), covering the drying of clothes amongst 10 European countries, as shown in Figure 5. Sweden and the UK are both at the top regarding ownership of a tumble dryer (52% each, Germany in third place with 47%). Finland, facing the same sub-arctic climate as Sweden, comes at fifth place but is, as noted in Figure 5 one of the countries least likely to use tumble dryers. However, looking at the average annual consumption of energy for drying clothes (both considering the use of tumblers and indoor drying spaces) Sweden is no anymore at the top. This time, both Finland and Poland are above, merely due to their extensive use of heated rooms. 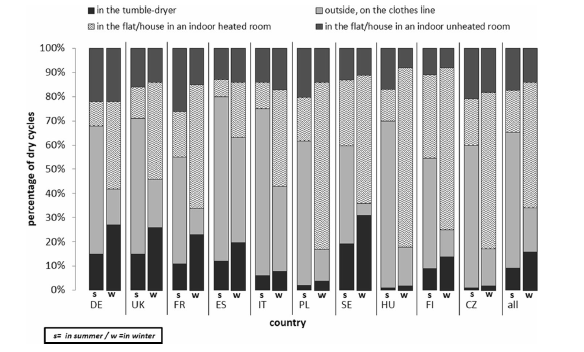 As Georgians already know, drying clothes does not have to be restricted to only sunny, breezy days but can actually be practiced all year round.

So where does this leave us with regard to Georgia and Sweden? The lead point of this blog post is that Georgians already use the most efficient way of saving energy with respect to clothes-drying, in all seasons. Therefore, the most effective way to promote energy efficiency in this area could simply be to advertise the benefits of line-drying before consumption preferences change and the transition to tumblers takes place. After all, “An ounce of prevention is worth a pound of cure.”

Tags: #consumption, #energy,
The views and analysis in this article belong solely to the author(s) and do not necessarily reflect the views of the international School of Economics at TSU (ISET) or ISET Policty Institute.