Do you happen to have some 1.7 trillion USD to spare? Somewhere between 2 and 10% of the Georgian population suffers from a lack of basic access to drinking water (Global High-level Panel on Water and Peace, 2017; The Global Water Partnership and OECD, 2015). Globally, 1 in 4 people will be affected by shortages of freshwater by the year 2050 (United Nations, 2018). It is, therefore, necessary to look at financial instruments that could help safeguard the supply of freshwater. Here, we will look at examples of such financial instruments, which have, for instance, been reported by OECD (2018) as well as the Global High-level Panel on Water and Peace (2017). Both reports highlight financial tools that could help fund major infrastructural projects in water management, something in which both governments and, perhaps even more importantly, the private sector could engage.

Today, 148 countries are share 286 transboundary lakes and river basins and only 84 of them have joint transboundary water cooperation with their riparian neighbors (Global High-level Panel on Water and Peace, 2017). According to the Global Panel, many of them need to be strengthened by, for instance, improving existing institutions that carry out the duties linked to cooperation. Locally, Georgia and Azerbaijan have both committed to aligning with the principles of the EU Water Framework Directive, 2000/60/EC OECD (2013). Furthermore, joint cooperation between the two countries regarding a transboundary cooperation agreement is expected to further deepen commitments related to the improvement of Kura River conditions. An inventory investigation conducted by OECD shows that transboundary management of the Kura River has faced challenges linked to issues such as water pollution, over-abstraction of groundwater, and an intensified hydropower sector OECD (2013). Recently, the National Environmental Monitoring Department of the Ministry of Ecology and Natural Resources in Azerbaijan monitoring report acknowledged the severe pollution in the Kura River. According to the announcement, pollution from the failing wastewater treatment in surrounding industries and homes are many times beyond the norm. The exact financial loss for the Georgian government will lose due to unsafe drinking or inadequate sanitation facilities is perhaps difficult to envisage. What is possible, though, is to have a quick look at estimates of life years lost per 100,000 persons due to lack of access or improved sources of drinking water (Figure 1), as well as the consequences of unsafe sanitation (Figure 2).

Figure 1. From this year’s Environmental Performance Index – Georgia lost 49 years per 100,000 persons during 2016 caused by lack of access to water. 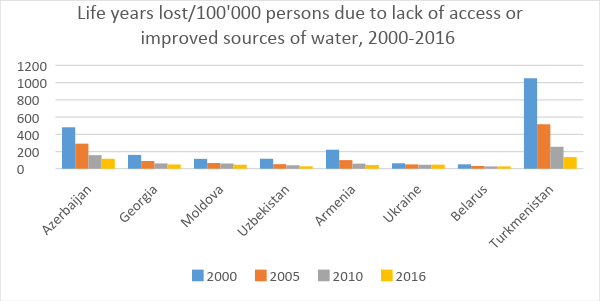 Figure 2. According to this year’s Environmental Performance Index, lack of unsafe sanitation caused 46 years lost per 100,000 persons during 2016. 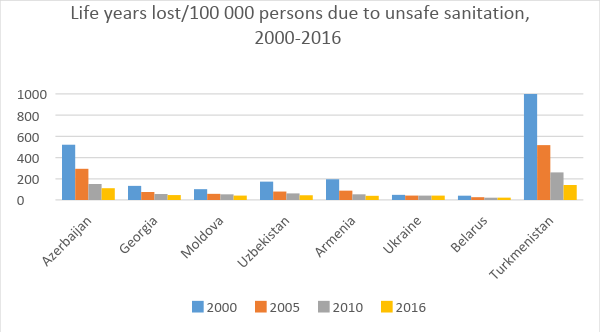 The Global Water Partnership and OECD (2015) reports that economic losses linked to insufficient sanitation and water supply could be as high as $260 billion per year. What’s more, in both Turkey and Azerbaijan, both of which share rivers with Georgia, an estimated one to two percent share of GDP accounts for economic losses linked to inadequate water supply and sanitation. For Georgia, economic losses per capita are mainly causing impacts for agriculture followed by impacts of flooding and on inadequate water supply and sanitation (The Global Water Partnership and OECD, 2015).

Inevitably, this leads to the question of what relevant financial instruments are available today for Georgia to help address this pressing challenge.

A MIX OF FINANCIAL INSTRUMENTS

Most financial support available today derives from public funds, but it does not cover the cost of scaling up the management of transboundary infrastructure and ensuring water for consumption and safe sanitation. What is needed is a sustainable financial system in which there is a thrust for inclusion of social, governance, and most importantly – environmental factors. These are the so-called ESG principles (Global High-level Panel on Water and Peace, 2017). Major banks, such as the World Bank Group teaming up with other major banks such as HSBC, have devoted specific funds to invest in various climate actions. However, there are other wide-ranging instruments at hand that are applicable on a governmental as well cross-sectorial level. One of these financial instruments is the International Waters Program of the Global Environmental Facility (working specifically with the recipient and non-recipient countries where tensions relating to water could arise). Their finances are channeled through international agencies such as the UNFCCC. Other convention funding mechanisms covering the institutional capacity building of transboundary organizations, or funding small to medium-sized infrastructure projects aimed at developing monitoring facilities, use funds from both multilateral and bilateral organizations. The advantage of these instruments is their intention to build up legal as well as institutional structures and to also cover necessary trainings and organizational costs. Small to medium-sized projects may be more appealing to countries that struggle with large time-and-money intensive infrastructure projects, something that signifies large water infrastructure projects (Global High-level Panel on Water and Peace, 2017; OECD, 2018). Another benefit to these instruments is the inclusion of sectors such as the private sector (this goes specifically for the small to medium-sized projects covering costs for the development of monitoring stations, for instance). One disadvantage of these conventional funding instruments, as projected by the Water Panel, is the lack of inclusion of development and infrastructure projects that could help elevate the conditions for millions of people and their surroundings. Funding from major multilateral development banks (MDBs) is not conditioned on riparian countries to reach out to one another. Yet another disadvantage is the continuing absence of private sector investments.

As mentioned at the start of this article, there is a lack of funding to cover the costs of the future supply of water, especially on a large-scale infrastructure level that requires cross-national cooperation. One example of a sustainable financial instrument, one that the Global High-level Panel on Water and Peace (2017) discusses quite extensively, is the Blue Fund.1 The idea of the Blue Fund is to enable nations to cooperate regarding their shared waters. The fund alleviates the burden of growing interest rates with the increased availability of loans from MDGs and donor agencies. The strength of the Blue Fund is that it can be flexible towards the current needs of the cooperating countries, and it is revised annually to match developing needs. The Fund also sponsors costs associated with insurance and expenses linked to preparatory work. What it does not fund is the infrastructure project itself, which has to be budgeted at $100 million or more to meet the Fund’s requirements. Consequently, transboundary projects need to have a so-called investment promise from third parties – MDBs or donors – that can take the lion’s share of the cost (piloted studies as well environmental impact assessment reports are needed initially). Types of financial institutions that have the financial means to alleviate interest rates on major loans can be found in the private sector. There is some growing interest, albeit slow, within the financial sector to gravitate towards the ESG-principles. This is expressed by actors such as rating agencies that have integrated the principles leading to the invention of green funds (with an estimated $100 billion raised in recent years). There are several signposts that demonstrate an increased investment rate in Blue Funds during the past couple of years with the initiative of The Congo Basin Blue Fund2 as an example. The major advantage of the Blue Fund is that it does not require a whole new setting for cooperating countries to look for funding, as it is a financial instrument that could be added to the conventional tools already in existence (e.g., loans from MDGs or major donor organizations). There is, of course, no fast track to boost the private sector’s willingness to invest, as investments are based on risk perception (major infrastructural projects tend to be investment intensive in combination with an extended repayment term) (OECD, 2018). But what could perhaps eliminate the sector’s hesitancies could be if investment were paired with multilateral institutions by co-investing in projects. Currently, it seems that Georgia would not be eligible for the Blue Fund, as it is limited to developing countries (Global High-level Panel on Water and Peace, 2017). Still, highlighting this type of fund in a transitional country could perhaps lead to an expansion of eligible countries, or even better, a similar fund could be established that aims at elevating efforts in major infrastructural projects specifically for transitional countries.

There are other instruments that are filling the existing gap of bankable projects. An example is the World Bank, which with funding partner countries has launched the Global Infrastructure Facility (GIF), offering a common ground for the private sector and institutional agencies to form partnerships within their financial capabilities. It is a platform for governments (such as emerging economies) to seek support in making infrastructural projects more bankable and available for interested funding partners such as the private sector. Georgia’s project, The East-West Highway Corridor (2018), is an example of an actual project supported by GIF attracting public-private partnerships.

A final point is that the above-mentioned financial instruments all aim to finance capacity and major cross-national infrastructure projects in water management. The notable aspect of instruments such as GIF and the Blue Fund is to increase the involvement of the private sector, which is much needed in order to achieve access to drinking water and safe sanitation for all by 2030. In the quest to find “blue money” the way forward could be to screen the inflow of finances within water management in Georgia and to detect where the capital could best match existing needs. Mapping the financial flow could lead to elevated efforts to improve the situation of the heavily polluted Kura River, for instance. The OECD and the European Commission have already initiated the work of assessing the financial capacities within EU-member states with financial needs (OECD, 2018). Similar work has also been undertaken by the Roundtable on Financing Water, which is looking at pairing investment needs on water security with available finances.

1 The Blue Fund is part of the Water Panel’s Blue Peace Framework, aimed at using water as a means to bring about peace.
2 A pilot project was defined at the African Summit in 2016, where a 3-million-euro fund was established for the Congo, directed at transboundary cooperation, including 10 riparian countries. Further information can be found here: Global High-level Panel on Water and Peace (2017, p. 65) and here: Congo Basin Blue Fund.

Tags: #energy, #georgia, #sdg, #water resources,
The views and analysis in this article belong solely to the author(s) and do not necessarily reflect the views of the international School of Economics at TSU (ISET) or ISET Policty Institute.