It is that time of year again when our world starts revolving around the World Bank’s Doing Business publication. It is a time when we once more have the chance to brag about how easy it is to start a business in Georgia, about how small the tax burden on businesses is, and about how good we are at enforcing contracts. However, we are unlikely to draw attention to our rank in the Resolving Insolvency indicator, which places us in a bracket alongside countries not necessarily known for their pristine business-enabling environment. Fortunately for Georgia, it seems that this area of weakness might be about to change for the better.

Insolvency law guides the relationship between debtors, such as entrepreneurs and shareholders, and creditors, such as banks and other institutions that lend in cash or in-kind, when debtors are, for whatever reason, unable to meet their obligations. The legal framework governing this relationship is instrumental to the efficient (that is fast) and cheap reallocation of productive resources to their best use when a business ends up in a financial crisis. The academic literature establishes strong interdependencies between economic outcomes and institutional quality, including that of the insolvency framework. While causation is difficult to establish empirically, the main channel through which the insolvency framework is believed to impact economic development is its significance for financial market development, which has proven to be an important catalyst for economic progress. 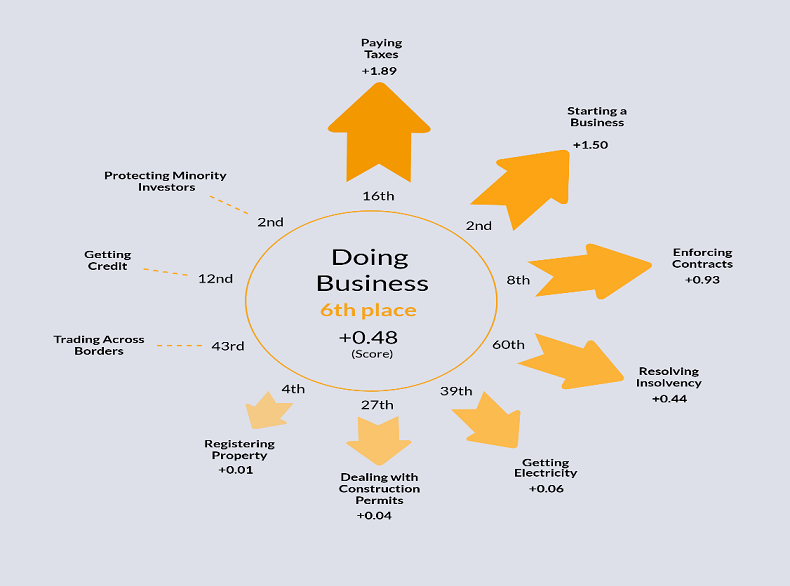 The Doing Business Resolving Insolvency indicator evaluates insolvency regimes around the world in terms of their ability to secure the most efficient outcomes. To make the assessments comparable, for each country the Doing Business survey analyzes a hypothetical case in which a business entity faces financial difficulties. In addition to objective, factual questions, which are based on legal documents, the Resolving Insolvency indicator also takes into account the subjective assessments of a number of stakeholders in each country, gaining their impressions on issues such as the likelihood of a distressed business entity being rehabilitated.

Georgia’s performance is comparable to that of developing countries in the Europe and Central Asia (ECA) region, but significantly lags behind high-income OECD countries on indicators such as the recovery rate, which is the key efficiency indicator that measures how many cents on the dollar would be collected by secured creditors from the insolvent firm at the end of the insolvency proceedings; the time needed for creditors to recover their credit, that is how long the insolvency proceedings would last, recorded in calendar years; and the cost of the proceedings, recorded as the percentage of the value of the debtor’s estate. The outcome of an insolvency proceeding is most likely to be a piecemeal sale, rather than a sale as a going concern, that is as a running business since the chances of the hypothetical business being rehabilitated are considered very slim. The piecemeal sale of a business significantly reduces its asset value, leading to much lower recovery rates for creditors compared to a going concern outcome.

In Georgia, the fundamental piece of legislation that governs the relationship between parties in insolvency proceedings is the Law on Insolvency Proceedings, which was enacted in 2007. A number of amendments have since been made to this law in an attempt to align it with international best practices; however, as evidenced by the international rankings and assessments, the existing legislation and practice fail to fulfill their function. Protracted and costly procedures, inadequate decision-making mechanisms and the overprotection of state interests all hamper and distort the fairness of insolvency processes in Georgia. This, in turn, leads to low rates of filing for insolvency, low rates of rehabilitation, a loss in the economic value of assets, low recovery rates for creditors, the weakening of the country’s reputation as an attractive business environment, and financial instability.

In 2014, GIZ, the European Bank for Reconstruction and Development (EBRD), and Governing for Growth (G4G) assessed the insolvency regime in Georgia and provided recommendations to alter both the law and the overall insolvency system. According to the assessment report produced by G4G, the current law “adversely affects the rights of senior secured creditors, largely ignores the rights of unsecured creditors, and does not provide a flexible enough framework for ‘rehabilitation’ to be a useful strategy for either debtors or creditors.” Meanwhile, the German economic team’s assessment identified two key aspects in which the Georgian framework fails to conform to international best practices. The first aspect is that the main focus of the current system is on the liquidation of insolvent companies, rather than on their rehabilitation. The second aspect concerns the limited institutional capacity to manage insolvency cases, such as the absence of an established profession of private insolvency officeholders (who provide temporary management while a company is engaged in insolvency proceedings).

In close cooperation with the Ministry of Justice of Georgia and the National Bureau of Enforcement, GIZ established a working group that started working on a new law on insolvency proceedings. The working group, which provided recommendations for policy change and issued a reform proposal, comprised representatives from the Ministry of Justice, the National Bureau of Enforcement, the Ministry of Economy and Sustainable Development, the Ministry of Finance, four prominent lawyers with extensive experience in handling insolvency cases, a representative of the Investors Council and German experts. The working group has now finished its elaboration of a brand-new draft Law on the Rehabilitation and Collective Satisfaction of Creditors and has started its consultation phase.

Some of the most noteworthy changes introduced in the draft law include the introduction of the concept of an insolvency practitioner, which means that a person can only assume the role of the bankruptcy or rehabilitation manager if she or he meets certain qualification criteria. Moreover, the law modifies the current rankings of creditors, boosts the rights of unsecured creditors in a number of ways, and introduces clear criteria on which a rehabilitation plan for a distressed company should be developed and approved. According to the Regulatory Impact Assessment (RIA) conducted on the draft law, the greatest change and most important improvement will be a complete change in the philosophy of insolvency proceedings: wherever possible, rehabilitation of the debtor’s enterprise is now at the center of all insolvency measures.

One of the exercises within the scope of the RIA was to estimate the impact of the regulatory changes on the Doing Business indicators. According to the analysis, Georgia’s score on the Strength of Insolvency Framework, which currently stands at 11, will increase to 14. The most significant progress is expected on the Reorganization Proceedings Index, where Georgia currently receives a score of zero out of a possible three points.

If all the deadlines stipulated in the draft law are strictly adhered to, we should also expect a significant decline in the time it takes to complete insolvency proceedings. A significant portion of the index is based on stakeholders’ assessments of the likelihood of rehabilitation once a business enters insolvency proceedings. The most substantial advancement in the rankings is thus expected if (in addition to legislative changes, which are technical in nature) the stakeholders contributing to the Doing Business Resolving Insolvency indicators perceive the rehabilitation of a distressed company to be the most likely outcome.

Under the most optimistic scenario, with strict assumptions, Georgia should expect to advance up the Resolving Insolvency indicator to 15th place – at least in the longer term, once stakeholders contributing to the survey are convinced of the quality of implementation of the reforms. Even after relaxing all the key assumptions, we should still be able to advance up to 46th place in the short run.

This analysis is based on the strong assumption that all the deadlines and procedures stipulated in the draft law are adhered to. However, as many of the deadlines in the current law are not being respected due to problems existing outside the law, it is highly unlikely that these deadlines will be met as a result of the proposed changes without additional efforts made to deal with these problems. These limitations notwithstanding, we are close to taking the first step towards making a giant leap.

Tags: #business, #private sector, #georgia, #insolvency, #reforms,
The views and analysis in this article belong solely to the author(s) and do not necessarily reflect the views of the international School of Economics at TSU (ISET) or ISET Policty Institute.