Dairy production in Georgia is a hot topic right now. Over the last couple of years, new state regulations have been adopted in this sector. The most widely discussed recent change in regulations prohibits the use of milk powder in cheese production. This regulation was adopted in 2015 but was amended in June of 2017 in order to better serve consumer interests.

While defining terms such as “cheese”, “butter”, and “matsoni” is definitely a step forward, the execution of this technical regulation is associated with many challenges, and Georgian consumers are still offered products that do not qualify as dairy products because they contain vegetable fat.

The biggest challenge is the large number of unregistered family farms producing and selling cheese on a regular basis. According to sector experts, up to 90% of cheese is produced by those unregistered households, which is not surprising because according to Geostat more than 97% of milk in Georgia in 2017 was produced by family farms.  These unregistered producers usually sell their unlabeled produce (mostly cheese) at open markets through intermediaries.

Another challenge is related to registered producers, who find different ways to overcome regulations through confusing and vague labeling of their products. The most frequent tool used by cheesemakers who use milk powder for cheese production is by labeling products with names associated with cheese-like “Imeruli” or “Sakhachapure”. By doing so, the producer does not explicitly violate the law because the name of the product does not contain the word “cheese”, but consumers definitely consider these products cheese.

One more challenge is associated with consumers’ low awareness of their role in supporting the state’s enforcement of technical regulations on dairy products. Most consumers do not react properly when they identify that the dairy product they have purchased is expired, or not expired, but still spoiled. Most consumers notify a consultant in the retail store about this case or do nothing at all, while only a small portion of consumers notify the National Food Agency (NFA), which is obliged to send its employees to the retail shop and fine it.

A BIT OF STATISTICS…

According to Geostat data, imports of milk powder have increased over time, while the amount of raw milk produced in the country has declined (Figure 1). 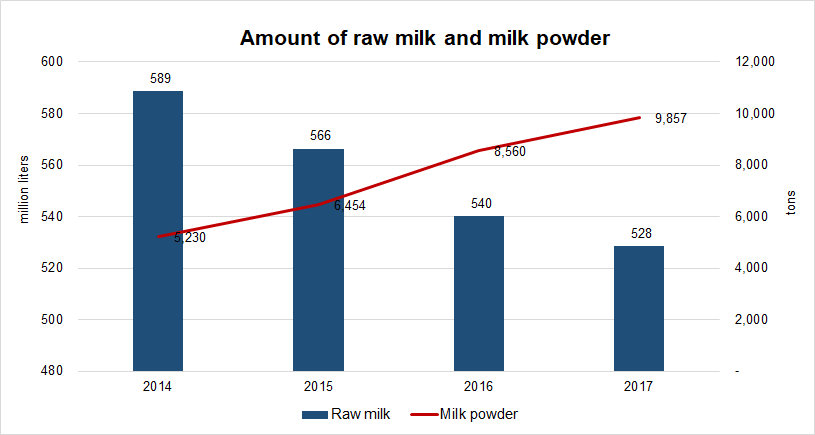 Thus, milk production in Georgia has declined by 10% in 2017 compared to 2014, while imports of milk powder, on the other hand, increased by a tremendous 88% for the same time period. This signals the massive use of milk powder in the dairy sector.

At the same time, exports of live cattle have increased in recent years (Table 1).

The biggest jump in live cattle exports happened in 2016 when the number of head exported almost doubled compared to 2015. In terms of export quantities, even more live cattle were exported in 2017 and 2018, although the total export value steadily declined, as did the unit value per head of cattle.

In light of existing trends and practices in the dairy and livestock sector, there is currently a shortage of safe raw milk in the country because of the low productivity of cattle and the small size of dairy farms. Inadequate feeding practices, lack of pastures, and poor veterinary practices lead to the lack of intensive cattle farms with high productivity cattle.  The few registered intensive dairies cannot compete with unregistered producers or producers who use milk powder in their production and produce lower quality products at lower prices. As far as current regulations favor family farms (individuals) by allowing them to avoid registration as a business operator, unfair competition among registered and non-registered producers will be apparent in the future as well.

Increased exports of live cattle also contribute to the reduction of milk production in the long run as well as an increase in meat prices.

In an attempt to respond to the challenges in dairy and meat production, just recently the Government of Georgia has banned the export of live cattle under the weight of 140 kg. The arguments listed by some proponents of the ban rely on the assumption that growing cattle in Georgia and after some period selling it for meat within the country is more profitable and generates higher value-added locally, rather than exporting low weight calves and heifers abroad. While that might be true, the new regulation has raised many questions about its legitimacy and appropriateness in a market economy.

In light of foreign countries’ experience and Georgian reality, it is hard to believe that the ban on the export of live cattle in Georgia can solve structural problems in the dairy and livestock value chains. Rather, the export ban is likely to have the following consequences:

• Higher exposure of livestock farmers to risks. Given that growing cattle in Georgia in light of the abovementioned poor feeding practices, and pasture- and veterinary-related issues is quite risky, the export ban obviously negatively affects farmers who previously engaged in live cattle exports by exposing them to those risks;

• Lower number of potential buyers of live cattle. Since contract farming is not well-developed in Georgia, sales of agricultural products locally are not only sporadic but difficult. Many farmers simply cannot sell their products for an adequate price. By restricting sales of live cattle to local markets only, the number of potential buyers clearly declines. Additionally, the introduction of HACCP requirements at slaughterhouses might lead to the closure of some regional slaughterhouses which will negatively affect demand for live cattle. If a local slaughterhouse is not available, the farmer gets a lower profit from sales of cattle for slaughter.

• Low bargaining power for livestock farmers. Restriction to local markets drives the price of live cattle down, which might be good for consumers because meat prices will decline, but producers are negatively affected. The overall impact on society – total surplus has yet to be studied.

These are just a few arguments that should be considered in addition to the potential commercial gains generally obtained when a farmer sells a product with more value-added. While theoretically raising cattle and selling it for meat should be more profitable for the farmer, one has to consider very carefully, why such an “obvious” opportunity is missed by the livestock farmer, what challenges the farmer faces along the value chain, and whether such a policy is the right solution to those challenges.

Tags: #regulation, #agriculture,
The views and analysis in this article belong solely to the author(s) and do not necessarily reflect the views of the international School of Economics at TSU (ISET) or ISET Policty Institute.