“We do not need people who will get credit to buy a refrigerator and TV, and end up in the black list” – Giorgi Kobulia, former Minister of Economy and Sustainable Development of Georgia

“Long-term financial stability gains are always worth the short-term costs” – Koba Gvenetadze, Governor of the National Bank of Georgia

Around two years ago, ISET-PI published a blog article on the problem of over-indebtedness in Georgia. The article stressed the idea that due to notably increased access to finances, an aggressive marketing campaign provided by financial institutions, and poor socio-economic conditions throughout the country, Georgians (particularly the poorest) are mired in a swamp of debt, from which they are unable to escape. The macroeconomic indicators, which typically measure the expansion of consumer credit, have experienced a dramatic increase over the last 6-7 years. For example, the household debt to GDP ratio has increased from 10.6% in the first quarter of 2011 to 36.7% in the fourth quarter of 2018. Furthermore, a households’ debt to a households’ disposable income rose from 25.2% in the fourth quarter of 2012 to twice as much, 57%, by the third quarter of 2018 (this is also its historical maximum). Household debt service and principal payments to income ratio have also experienced a dramatic increase, from 9.5% in the first quarter of 2012 to 14.6% by the third quarter of 2018 (Source: Financial Soundness Indicators of the National Bank of Georgia). Although the soundness of deposit-taking institutions was not under question (microfinance institutions, online lenders, and other non-deposit taking organizations were much more fragile, however), there were stories of poor and vulnerable people whose finances collapsed under the burden of expensive loans, causing the loss of their only property.

WHAT ARE THE TWO WAVES OF THE REGULATIONS?

ISET-PI’s article was not alone in highlighting the threats of over-indebtedness in Georgia. International organizations also drew much attention to the topic, and ultimately recommended that policymakers introduce appropriate policy measures to regulate credit expansion. The first wave of credit regulations was introduced in May of 2018, and it aimed to restrict borrowing for individuals who might not have enough income to service their debt. A corresponding amendment was prepared by the National Bank of Georgia (NBG), however, the new initiative also received significant support from upper-level government officials (particularly within the ministry of finance). The newly imposed regulations restricted issuing loans without comprehensive analyses of consumers’ solvency. Commercial banks were, moreover, only able to issue loans without a solvency analysis of up to 25% of their supervisory capital. The first wave of regulations was particularly restrictive for microfinance institutions (MFIs) and online lending companies, and the number of MFIs reduced from 73 in May of 2018 to 65 in January of 2019, while the number of online lending companies declined from around 75 to a much reduced 30 in the same period (there is no proper information regarding the number of online lending companies, thus these numbers simply represent an estimate from financial experts).

The second wave of, more restrictive, regulations entered into force in January 2019. The respective legislative act defined responsible lending principles and ascertained solvency analysis (which implies a detailed analysis of incomes, expenses and the total obligations of lenders, and verification of information provided and clients’ credit history, etc.) for any institution that issues loans to more than 20 individuals, including commercial banks, MFIs, online lenders and others. Additionally, the longest duration for mortgage loans, consumer loans with real estate collateral, and transport loans has been defined as 15, 10, and 6 years, respectively, while the maximum duration of other consumer loans is only 4 years. Moreover, it is required that the difference between a debtor’s net income and their loan not be less than the subsistence minimum. The decree has also defined the upper ceilings of Payment-to-Income (PTI) and Loans-to-Value (LTV) ratios for various disposable income groups – the ceilings are presented in the table below (Source: FactCheck, GRASS, New Lending Regulations – New Barriers for the Consumer and for Business).

WHAT ARE THE CAUSES OF OVER-INDEBTEDNESS?

Economic literature reveals that “a private household is over-indebted if its income over an extended period is not sufficient for servicing debt on time (after deducting costs of living expenses) despite a reduction of the standard of living” (D’Alessio and Iezzi, 2013). Unfortunately, there is no empirical literature studying the characteristics of over-indebted households in Georgia (to ask the relevant questions – Why was a loan required? What was the reason for a household’s insolvency? What is their average income? What is their level of education? etc.), nevertheless, it is still possible to identify potential causes. The origins of the over-indebtedness problem can be divided into two groups – from the demand and the supply side.

One can identify the following demand-side causes:

These demand-side factors would never have helped produce an over-indebtedness problem without an initial supply of credit. One can identify the following supply-side causes:

The combination of demand and supply-side factors has resulted in a much faster increase in domestic credit than in the overall economy, and considering the source of this increasing trend (generally not creditworthy people), the National Bank of Georgia has decided to restrict credit expansion to minimize the risks of financial instability.

WHY ARE WE CONCERNED ABOUT OVER-INDEBTEDNESS?

According to the empirical literature, there are three groups of negative consequences possible behind the over-indebtedness problem:

WHAT ARE THE SHORTCOMINGS OF THE PROPOSED REGULATION?

It is notable that supply-side regulations usually create a tradeoff between the long-term benefits of financial stability and the short-term costs of restricted credit. The government needs to tread lightly between protecting consumers from becoming over-indebted and supporting the profitability of financial intermediaries to increase access to credit (Porteous, 2006). Therefore, it is necessary to carefully examine the short-term costs of the regulation: 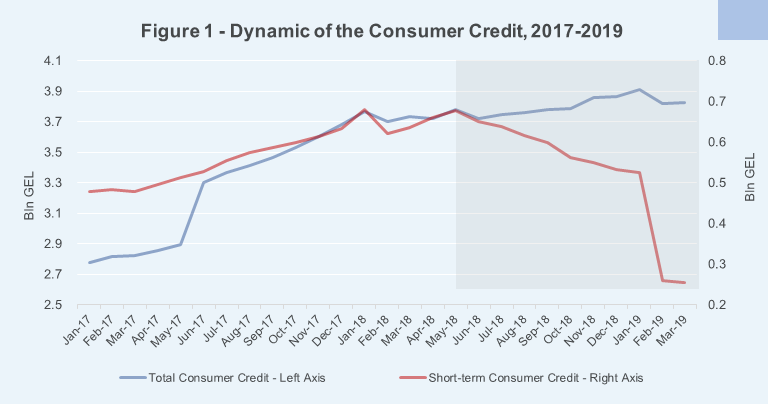 4. Private Lenders. A controlled supply of credit without restricting its demand might lead to a disbalance in the credit market, which raises the opportunity for non-regulated private lenders (individuals who are lending money to less than 20 people for certain interest [ordinarily higher than offered by other institutions] payments) to attract clients and charge fairly high-interest rates.

To conclude this article, it is worth mentioning that the regulation package proposed by the National Bank of Georgia only includes supply-side measures, even though over-indebtedness is an extremely complex phenomenon and originates from both supply and demand-side factors. Furthermore, a large section of the empirical literature concludes that only policy strategies that contain a balanced mix of demand and supply measures can hope to address indebtedness (Braucher, 2006 [relating to the United States of America]; D’Alessio and Iezzi, 2013 [South Africa]; Kovács, 2013 [Hungary]). Therefore, policymakers should work hard to improve financial literacy for all of society (particularly the younger generation and the most vulnerable); reduce poverty and unemployment using appropriate economic and social policy measures; introduce certain regulations to the gambling sector (particularly for people under 18 years old); improve consumer protection; etc.

Tags: #regulation, #policy, #poverty, #loans, #banking sector,
The views and analysis in this article belong solely to the author(s) and do not necessarily reflect the views of the international School of Economics at TSU (ISET) or ISET Policty Institute.