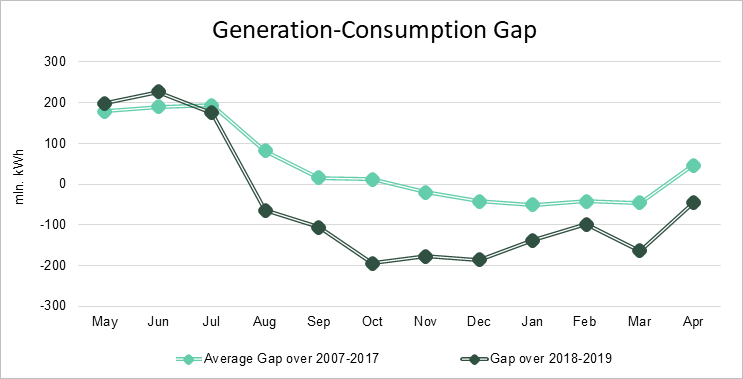 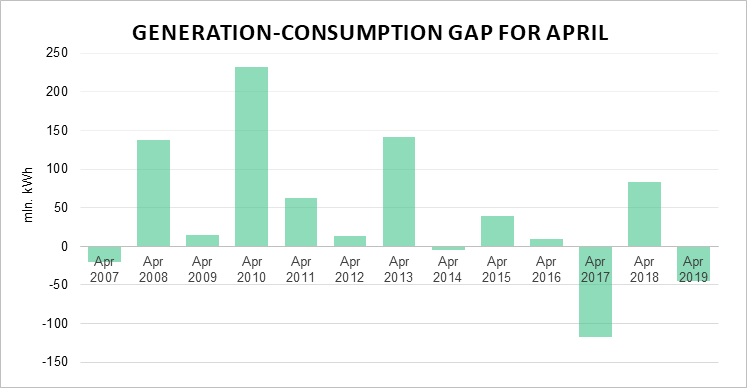 There are two key factors that determine the negative gap between generation and consumption, namely, power plants’ decreased generation and the country’s increased consumption. As the Georgian electric system is heavily dependent on hydropower plants, it is important to look at the average generation of HPPs between 2007-2017, and the generation within the last twelve months.

Enguri HPP and Vardnili HPP (the dams with pumped storage) represent a major source of electricity and their production trends provide a picture for the typical generation potential within the indicated periods. Comparing the average generation from 2007-2017 to the last twelve months, one can see that power productions levels were significantly higher in the summer of 2018 (May, June, July), rather than the 2007-2017 averages in the same period. The trend remains similar for the Enguri and Vardnili HPPs, which highlights that the increased electricity provision relates to increased generation of the existing regulatory HPPs, rather than to new entrants on the electricity market. Over most of the past twelve months, HPP generation was above the average generation of 2007-2017. An initial consideration is whether the jump in electricity generation by HPPs, particularly Enguri and Vardnili, in the summer of 2018 was due to abundant precipitation, or whether it was a direct response to increased demand that forced the use of dam reservoir resources. The available information, however, does not offer a simple response. Enguri and Vardnili undoubtedly generated a below-average quantity of electricity in certain months, though this was not the case for overall HPP generation. Nevertheless, even in poorer than average months, the typical generation was fairly similar to 2007-2017 averages (with the exception of March 2019) and thus may have been caused by other factors.

Considering consumption levels over the past twelve months and the average consumption level between 2007-2017 (Figure 5), one can see that consumption increased substantially above average. This undeniably contributed to the persistent negative gap over the past nine months, and it might well be one of the main causes for the perpetuation of the gap. It seems clear is that HPP generation has remained relatively stable over the last decade, while electricity demand has been ever increasing.

These features raise several further questions: In relation to 2007, why has HPP generation failed to rise, even though a greater number of HPPs are currently operational (at least on paper)? What are the foremost causes behind the increased demand and the main sources of consumption growth? What trends can be expected in the future? Each of these questions requires further investigation, and we will address them over the coming months.

Tags: #georgia, #consumption, #electricity, #energy,
The views and analysis in this article belong solely to the author(s) and do not necessarily reflect the views of the international School of Economics at TSU (ISET) or ISET Policty Institute.