LOOKING AT A PARTICULAR BUNDLE OF PRODUCTS…

According to the Retail FPI, prices of major commodities increased in March of this year compared to the same period the previous year. Sugar prices increased the most, rising by almost 30%, whereas rice, buckwheat, and wheat flour prices increased by 23.8%, 16.3%, and 7.1%, respectively. 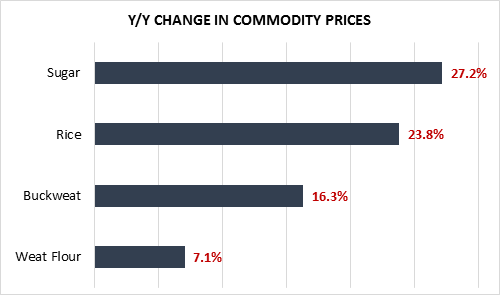 While m/m changes are usually driven by seasonality or holidays, such as Easter, which is coming up, y/y changes are mostly driven by the variations in production and international prices.

Commodities in the diagram are basic foods that are actively traded on international food markets, and due to their importance for food security in developing countries, the FAO closely follows their prices. FAO’s latest data on their Sugar Price Index shows a huge 55% increase in sugar prices y/y (Feb 2017 compared to Feb 2016). The most recent prices for cereal are also higher, as shown by the Cereals Price Index.

Given that Georgia is a net importer of these commodities, one might expect further price hikes if international trends are continued into the future unless Georgian supermarkets offer some discounts to consumers due to the Easter holidays.