Agricultural and rural development play an important role in the country’s socio-economic development. The restrictions imposed during the pandemic have hindered spring agricultural works which have significantly worsened conditions for farmers and stalled their future potential. Consequently, the Georgian government developed an anti-crisis plan, “Caring for Farmers and Agriculture”, that was presented on 12 March. The proposal entails two forms of aid: direct assistance and sectoral support. Table 1 summarizes each component of the plan:

Source: The Ministry of Environmental Protection and Agriculture of Georgia, 2020

ADVANTAGES AND DISADVANTAGES OF THE ANTI-CRISIS PLAN

The proposed anti-crisis plan has the following advantages:

1. Supporting domestic production: The recent crisis has clearly demonstrated the importance of local production from a food security standpoint. As self-sufficiency rates for most products are low, it is crucial that any governmental policy aims to develop local production and identify the sectors with the potential for high import substitution.

2. Registration of agricultural land in state support programs: Inadequate land registration is one of the most significant challenges facing agricultural development. Despite the recently simplified procedures and certain positive changes, the majority of land remains unregistered. Within the anti-crisis plan, only farmers with registered land can benefit. Thus, in the short term, this restriction might significantly reduce the number of beneficiaries, however, the registration of agricultural land is ultimately essential for the establishment of a properly functioning land market.

3. Positive changes to the existing programs: Agricultural loans and insurance projects are also worth discussing. The anti-crisis plan includes a secondary guarantee for working capital loans for livestock breeding to significantly stimulate the industry. While in agri-insurance, from international experiences, establishing an agricultural insurance system, with independent function and without any subsidies, requires the development of insurance culture and societal awareness, for which certain financial education is also needed. Since an insurance culture is not yet well-established in Georgia, it is important that the government supports this initiative for a few years and maintains its long-term vision.

Alongside such advantages, the risks associated with an effective anti-crisis plan are also noteworthy:

1. Supporting smallholder farmers with agricultural cards: A similar program has already been implemented by the government (2013-2015). The program received critical assessment because it failed to have a significant, sustainable impact on increased production in the agricultural sector. The program had several shortcomings, the majority of which related to the improper (non-targeted) use of the cards. Therefore, it is vital that the suggested program considers such previous flaws. Moreover, if one considers that a portion of farmers has already purchased agricultural inputs, the benefit of agricultural Cards may ultimately be insubstantial.

2. The diesel fuel program: It is important to minimize the cost of agricultural inputs for farmers, however, considering worldwide decreased fuel prices, the financial means used for this program could certainly have been employed more beneficially elsewhere.

3. The necessity to refine programs: Despite the modified conditions, agricultural insurance still does not cover spring frosts, which are regarded as a key risk. Agricultural insurance additionally fails to include the livestock breeding sector. In 2018, for instance, livestock losses in the country were as follows: 55,800 cattle, 76,100 pigs, and 96,200 sheep and goats (Geostat, 2020).

SUMMARIZING THE ANTI-CRISIS PLAN FOR AGRICULTURE

The mechanisms of the anti-crisis plan, overall, represent an extension of older programs that aim to solve fundamental problems within the sector. As yet, the anti-crisis plan does not focus entirely on solving problems caused by the pandemic; the restrictions caused by the pandemic have expressly complicated the logistics and distribution of products and caused certain obstacles in the supply chain. According to research from the Georgian Farmers’ Association (GFA), 55% of surveyed farmers and agricultural business representatives have encountered complications with product realization. Most farmers depend on the HoReCa (hotels, restaurants, and cafés) hospitality sector, and their products are largely procured for accommodation and food facilities. While, 60% of those surveyed claimed that they were simply unable to sell their products since the closure of hotels, restaurants, and cafés. In such cases, it is vital to resolve logistical issues and to develop new channels of distribution, complications which have not currently been considered by the governmental anti-crisis plan.

In addition, the current obstacles in the supply chain have intensified the need for refrigeration and storage facilities. Over the last month, farmers who were incapable of selling their produce were left with a spoiled harvest. Storage facilities would therefore have given farmers the opportunity to temporarily store their products, without waste.

The anti-crisis plan assumes massive subsidies to smallholders; and, in essence, this is a social program rather than a guarantee for economic profitability in the agricultural sector. It should be noted that increased state expenditure on agriculture has had no significant impact on the gross domestic product (GDP) in the sector (see Figure 1). 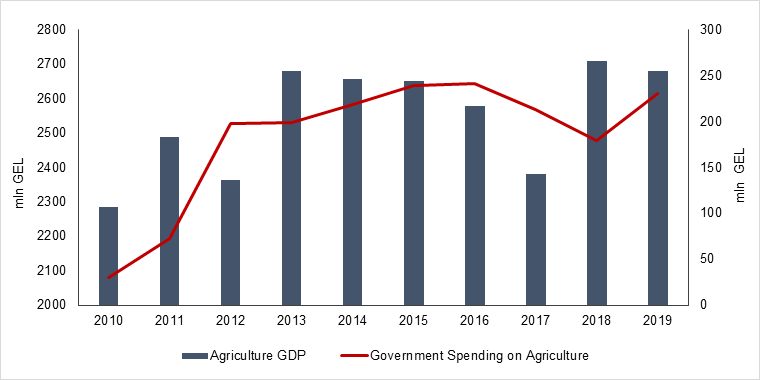 In order to achieve sufficient growth in the agricultural sector, it is necessary to differentiate between commercial and subsistence farmers. Due to their distinctive needs, these two groups require unique approaches; as mass subsidies in the sector can hinder structural change and competition, and create the wrong incentives.

Tags: #farmer cooperatives, #agribusiness, #agriculture, #land registration, #covid19,
The views and analysis in this article belong solely to the author(s) and do not necessarily reflect the views of the international School of Economics at TSU (ISET) or ISET Policty Institute.