Many of us well-remember the cold winter of 2006 when the Russian Federation cut its natural gas supply to Georgia. In general, it is clear that diversification in energy import markets reduces the risk of socio-economic shocks following political tensions with other countries. Fortunately, Georgia managed to find an alternative to the Russian supply and started importing gas from Azerbaijan. This blog will review the current gas import situation and discuss the expected trends in natural gas supply security.

As Yergin (2006) notes, the primary factor required to achieve energy security is diversification.1 The more suppliers a country manages to acquire, the higher its energy security level becomes. The author suggests that the second main factor contributing to energy security is well-functioning infrastructure. Such infrastructure includes facilities storing strategic energy reserves, maintaining adequate technical equipment, and an insurance system for cases of political or economic shocks in neighboring countries.

Georgia still has a way to go in terms of the first factor proposed above. In terms of natural gas import, Georgia is now heavily dependent on supply from Azerbaijan; roughly 90 percent of all its imports of natural gas are derived from Azerbaijan and the remaining 10 percent from the Russian Federation (Figure 1). The lesson from 2006 is poignant, and it is evident that dependence on a single market is always risky. Therefore, considering the tension between Armenia and Azerbaijan (the most recent armed clash began on September 27 in Nagorno-Karabakh), Georgia has to seriously consider additional methods of ensuring a stable natural gas supply for the population.

Figure 1. Shares of import of natural gas by country (according to the import value) 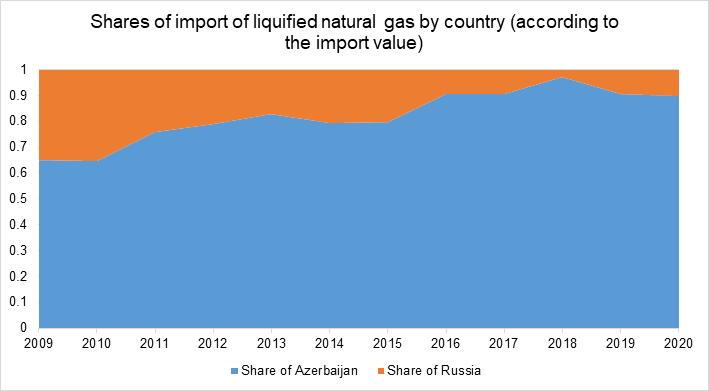 With the unending turmoil in the South Caucasus and political tensions with the north, it is essential for Georgia to carefully address the issue of natural gas security. As diversifying import markets is not a short-term task, Georgia shall put parallel efforts in securing enabling infrastructure. Over the last years, it is possible to note certain practical dynamics in this strategic direction. As per the commitment taken under the EU-Georgia Association Agreement, Georgia shall build an underground gas storage facility. Thus in 2018, the Georgian Oil and Gas Corporation signed an agreement with the German bank KfW for a 150 million EUR loan to build such a facility. This facility was intended to be constructed near Tbilisi, with storage for up to 15 percent of the annual Georgian natural gas demand (therefore, even in the absence of imports, Georgia would have gas reserves for around one month). Such an initiative is an attempt towards greater Georgian energy security, which would also contribute to steady economic growth.

However, the current year has disrupted many projects around the world. With the whole world facing the Coronavirus pandemic, and due to the lack of information on the virus, most countries have decided to adopt a precautionary approach; locking borders and imposing strict regulations on the population. These policies have resulted in a worldwide economic recession dealing with which requires significant fiscal intervention.

The Georgian government decided to redirect some of its funds towards fighting the Coronavirus (including combating the economic effects of the crisis), and the loan from KfW was part of such funding. According to the document presented by the Ministry of Finance to the Parliament of Georgia, from the 150 million Euro intended for the underground storage facility, 120 million will be spent on the fight against Coronavirus.23 While certain government officials suggest the money needed for 2021 (30 million) is still available for the gas storage project and only the money for 2022 is being temporarily redirected. Moreover, they assure the populace that the project will not be halted and that Georgia will continue its path towards energy security.4 This will require, however, that the government find a way to gather the necessary resources from 2022 onwards. With an economy already damaged by the COVID crisis, and in which the second COVID wave seems to be gaining strength, freeing these resources might not be an easy task.

A lot, therefore, seems to depend on how successful the government will be in the fight against the pandemic and in restarting the economy. If the government’s strategy is successful and there will be no need for a new lockdown in the upcoming months, the economy is less likely to suffer and there will be no need for further fiscal interventions, freeing resources for projects such as the gas storage facility.

So, how is the fight against the coronavirus going? Oxford’s COVID-19 Government Response Tracker reveals that from 31 March to 26 April Georgia received the full 100 points (i.e. the government’s measures were at the strictest level) (Figure 2).5 Currently, the Response Stringency Index currently equals 60.19 (Figure 2), which is roughly identical to the level in August, although the daily cases in September have been multiple times higher than the average level in April. To explain such change in the approach, government officials claim that the healthcare system is now ready for the second wave of infection. If they are right, and such level of the Response Stringency Index can be maintained, without the number of cases exceeding the capacity of the Georgian healthcare system, no strict lockdown might need to be introduced, even though the number of confirmed cases looks alarming compared to those faced in April. A few days ago it was mentioned that Georgia would return to “normality” unless the number of cases surpassed 400 per day (the healthcare sector appears prepared for fewer daily cases).6 Yesterday, October 1st, the number of new cases rose to 448. 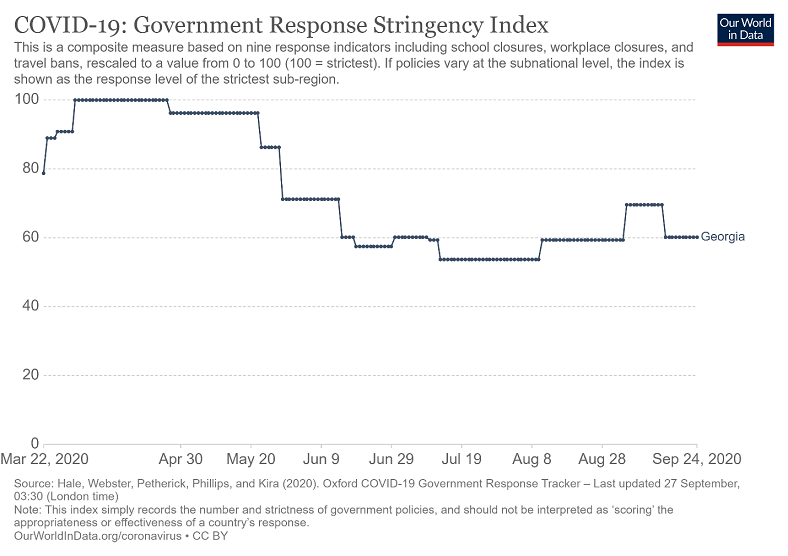 In conclusion, the future remains ever unclear. With slow progress in creating a vaccine and the alarming infection rate in Georgia, nobody knows whether there will be a need for a lockdown anytime soon in the future. Therefore, we cannot clearly predict whether further fiscal intervention will be needed to revitalize the slowed economy. Hence, the gas storage project, which is an important aspect of the security of gas supply of Georgia somehow keeps depending on the development of the war against the unpredictable pandemic.

Tags: #energy, #georgia, #covid19, #energy security,
The views and analysis in this article belong solely to the author(s) and do not necessarily reflect the views of the international School of Economics at TSU (ISET) or ISET Policty Institute.