Development of municipal services and infrastructure, in particular transportation infrastructure, is one of the pillars of the State Strategy on the Regional Development of Georgia for the period 2010 to 2017. Even though the strategy was approved by the previous government, the new government is not only committed to continuing all the planned infrastructural projects but is also going to start new projects, focusing on upgrading the regional infrastructure. According to the planned budget for 2013, the Ministry of Regional Development and Infrastructure (MRDI) is expected to spend 501.7 mln GEL (55.7% of the ministry’s 2013 budget) on road infrastructure improvement. Looking at the figure below, only four (Kakheti, Samegrelo-Zemo Svaneti, Samtskhe-Javakheti, and Tbilisi) out of eleven regions are going to spend less than half of their development budgets on road construction and rehabilitation in 2013. This does not necessarily imply that the government places less weight on having quality roads in these areas, but simply that important large-scale projects have already been completed in these regions and the focus has been directed from roads to other priorities. Not only is the government concerned with having more and better roads on both the regional and national scale, but the ministry also believes that “Infrastructure improvement represents one of the key preconditions for regional development” (MRDI action plan 2013). 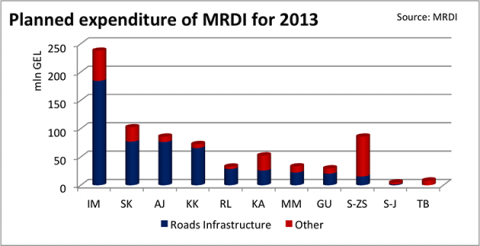 It is an established regularity in economic geography that when interregional road infrastructure improves it usually leads to a concentration rather than a diversification of economic activity. The mechanism works as follows: better roads improve market access for firms in both lagging and leading regions. Firms in leading areas are usually, almost by definition, more cost-efficient and, therefore, more competitive than those operating in lagging areas. Lowered transaction costs give them the possibility to sell their output in lagging areas, too. As a result, production gets concentrated in leading regions, exacerbating pre-existing regional disparities. This is especially true for sectors exhibiting increasing returns to scale (output increases by more than proportional change in all inputs, in other words, scale).

However, as trade is mutually beneficial, lagging regions will also benefit. Two channels are worth emphasizing. First, reducing transaction and transportation costs encourages trade between the dissimilar regions that specialize in the sectors of production that they have a comparative advantage in. In the Georgian case, road infrastructure would foster Kakheti specializing in wine production, Samtskhe-Javakheti in dairy products, Svaneti in tourism, and so on. And second, price level reductions will occur in lagging areas due to more efficient production processes and reduced transport costs which benefit consumer welfare at large in these regions.

These channels were empirically validated for the Chinese case by Benjamin Faber of the London School of Economics in 2012. His empirical exercise has shown that remote counties, linked to other regions through the National Trunk Highway System (NTHS), were negatively affected in terms of industrial, non-agricultural, and total output growth. Nevertheless, peripheral regions benefitted from price index reductions.

Putting aside the negative externalities associated with road infrastructure, such as pollution or accidents, road improvement has merits in many respects. The fact that it will not necessarily facilitate balanced socio-economic development of the regions is not a reason to cancel those road infrastructure improvement projects. However, it would be good to see the state’s vision concerning why it is being done and what the final goals we are trying to achieve are. If we take regional GDP growth as an observable indicator of regional development, then there is a high chance that we will not be able to get that. However, taking into account the greater potential for labor mobility (inter-regional commuters, for instance), regional GDP would provide quite an irrelevant indication of the living standards of the population in a given region. Moreover, if people are free to migrate to other regions (and mostly, they are), even existing regional disparities become economically meaningless. Although we do care about the lagging regions, they are not the priority per se; we care about them simply because of the welfare of the population residing there.

Tags: #transport, #infrastructure, #sustainable development,
The views and analysis in this article belong solely to the author(s) and do not necessarily reflect the views of the international School of Economics at TSU (ISET) or ISET Policty Institute.