Sadly, today we are using budget funds to directly fund unemployment. We are financing professions that may not be required later.

Like most other former socialist countries, Georgia enjoys a very high literacy level, as measured e.g. by the share of people completing secondary education. And yet, the single most problematic factor for doing business in Georgia, at least since 2013, is the “inadequately educated workforce”. Not crime. Not corruption. Not access to finance. Not faulty infrastructure. Inadequately educated workforce.

Table 1: The most problematic factors for doing business in Georgia since 2007

Importantly, the problem is not so much about access to education per se but access to the right kind of education and, most importantly, high-quality Vocational Education and Training (VET). Equally disturbing is the other side of this coin: youth unemployment, particularly high (about 30% in 2016) among those aged 20-24.

So, what do we do to tackle this problem?

One possibility is to revolutionize the VET system and dramatically improve the quality of vocational training and education offered by Georgian public and private colleges. Sounds like the right thing to do, except that Georgian youth don’t really want to be trained for what they perceive to be low-paying, manual jobs. As one employer put it in a public discussion forum, “all Georgians want to become economists and measure the country’s GDP. Nobody wants to actually work and contribute to the GDP”.

Clever technicians and people with great manual skills can actually earn a lot of money, even in Georgia. Our challenge is that many Georgian boys (and girls) don’t want to go into vocational training for reasons that have nothing to do with their future occupations and earnings. First, there is the issue of social status. Second, young Georgian males would do anything to defer and completely avoid military conscription, an option reserved only for university students, under Georgia’s current laws. Third, universities offer better networking opportunities and a far superior marriage market. “How do you become a general’s wife”, asks Liudmila in the Soviet 1980 classic Moscow does not believe in tears. The response she got was “You marry a young lieutenant”.

The challenge of over-education is not unique to Georgia. It is rooted in the truly global phenomenon of ‘degree inflation’ whereby a very large share of youth is trapped into at least trying to get a college degree (any). The logic is very simple. If everybody, even people of very modest academic abilities, have a college degree, not having one comes with a stigma.

In the run-up to the 2008 subprime mortgage crisis, ever-increasing prices lured people into buying a piece of real estate even when they could not repay their debt. Today, many Americans of subprime means and subprime academic abilities are trapped into mortgaging their lives in order to finance college degrees that serve no purpose other than avoiding a social stigma. Some economists believe that the fast accumulating mountain of student debt will be the next big financial bubble.

In Georgia, the problem of over-education is compounded by the fact that access to (useless) higher education is very easy. The revenue stream of Georgian universities depends only on one thing: the number of students they enroll. Not research productivity. Not teaching quality. Not students’ learning outcomes or their employability. Just the number of tuition-paying students. It is therefore not surprising that universities set very low admissions standards and implement very loose screening in the course of one’s studies. Effectively, universities and students strike a deal: universities pretend to be teaching, and students pretend to be studying. As my 12-year old daughter would say, easy peasy lemon squeezy.

Furthermore, university degrees are not only easy to get. They are also affordable. The fees charged by Georgian universities (about $900/year) maybe not be within reach for many Georgian families. However, those who can afford private tutors may qualify for a government scholarship. And because class attendance is neither required nor monitored, the opportunity cost of acquiring a university degree is extremely low. Most students, the most employable among them, start their professional careers while in the 2nd or 3rd year of studies.

Most crucially, the “pretense” equilibrium in the Georgian education market is very stable. Diploma mills are not sanctioned for not delivering education or skills. Georgian employers in any case prefer to hire candidates with a higher education degree (any). And it cannot be otherwise in an environment in which even taxi drivers and shop assistants brandish a university diploma (or two).

The Georgian government’s goal, as specified in its 4-point plan, is to remake the entire VET landscape: phase out outdated class-based learning by aging VET professors and introduce the so-called dual education model that is practiced in countries like Germany, Austria, and Switzerland. The concept of dual education stems from the centuries-old apprenticeship tradition surviving to this day in many parts of Western Europe. According to this model:

• VET students are employed as apprentices by private companies for the entire duration of their education. In fact, their enrolment is conditioned on being hired!

• Furthermore, about 70-80% of the students’ learning objectives are achieved through on-the-job training, while only 20-30% are acquired through classroom instruction.

• As apprentices, students are paid a modest salary or stipend, which together with the cost of training/mentorship, exceeds their productivity in the early training phase. The costs of training (for the companies) are more than fully recouped later when apprentices acquire the basic skills of their profession.

This model of VET education is supposed to be allowed and, indeed, encouraged by Georgia’s new laws on VET and Public-Private Partnerships. But, is it feasible in the current Georgian context?

Figure 1: The economics of industry-led VET education: the costs incurred by employers in the early phase of a student’s apprenticeship are covered by gains achieved once the student achieves a basic level of qualification 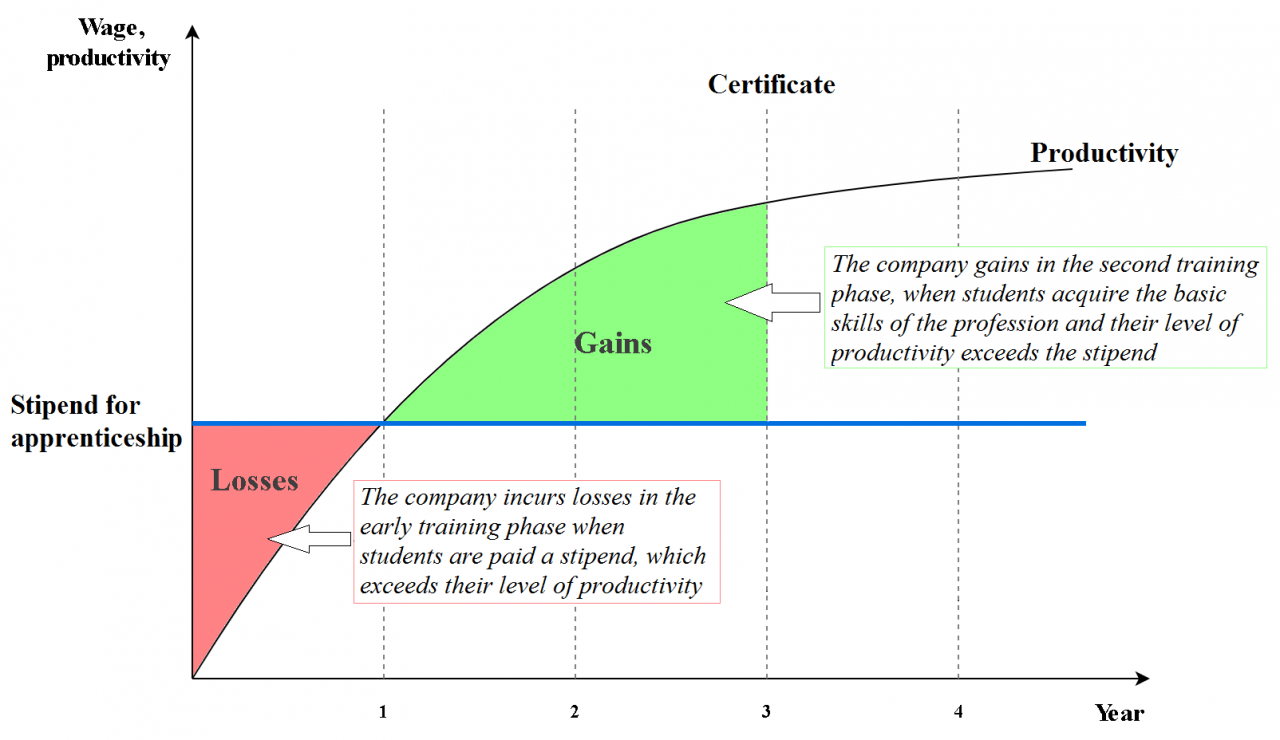 The situation has been very well characterized by Nikora CEO Irakli Bokolishvili: “Skills are definitely a bottleneck for us”, said Bokolishvili at a recent ISET-hosted seminar. “We tried to hire graduates of the Agrarian University but they have not seen meat in the life. At the same time, businesses are not “training centers”. If I train people, how can I be guaranteed that they stay with me? A good specialist can easily find a job elsewhere.”

In recent years, the Georgian government has undertaken a number of important legal steps to allow private sector companies to develop and run dual education programs. Yet, though necessary, such steps are not sufficient. In the absence of relevant traditions, the government should be willing to engage in a serious coordination effort, strengthening and, in some cases creating, sectoral business associations, empowered to decide on relevant qualification standards and be involved in the governance and management of VET programs. One can start in a small way by piloting the model in one or two sectors in which coordination among leading actors may be easiest to achieve (construction?).

Second, Georgia may be proud of its success back in 2005 in implementing tough policies to eliminate corruption and restrict the supply of low-quality higher education’. It introduced unified university admission examination and withdrew licenses from more than a hundred of ‘degree mills’ or village universities (orghobis universiteti), as they were called in Georgian. Time may have come to take further steps: raise the mandatory threshold for university admission; set a higher minimum tuition fee to further narrow the field; condition public scholarships on means testing in addition to NAEC exam scores; put universities and VET college on a level playing field when it comes to military conscription.

Provided political will is there, such measures are likely to have an immediate and significant impact.

Tags: #education, #georgia, #employment,
The views and analysis in this article belong solely to the author(s) and do not necessarily reflect the views of the international School of Economics at TSU (ISET) or ISET Policty Institute.