DRINKS IN THE SPOTLIGHT 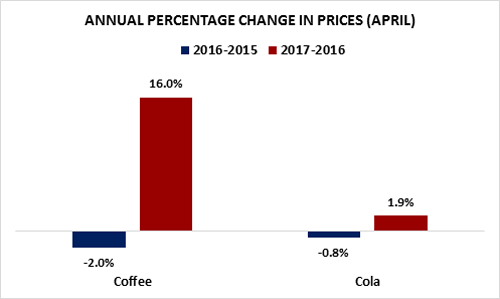 One explanation for the higher coffee prices lies in the fact that Georgia is importing coffee, and its depreciated currency puts upward pressure on coffee prices. At the same time, coffee became more expensive on international markets as well and showed a 10.3% increase on annual basis in April.

Unlike coffee, Coca-Cola is produced in Georgia and is not imported, however, one of its major ingredients – sugar – is still imported into Georgia. The higher world price of sugar might be contributing to the increased Coca-Cola price.

Thus, the most popular caffeine-containing drinks have become more expensive in April, hitting the budgets of caffeine lovers.