May 15, 2017 FPI | Cabbage in the Spotlight
Home Indexes Agri Review

A CLOSER LOOK AT CABBAGE PRICES

Cabbage is among the products that exhibited the largest increase in prices in May compared to the same month of the previous year. The price of cabbage now is around 1 GEL, whereas last year it was 0.47 GEL on average in the same time period. Thus, cabbage prices in the major supermarkets of Tbilisi have more than doubled y/y. 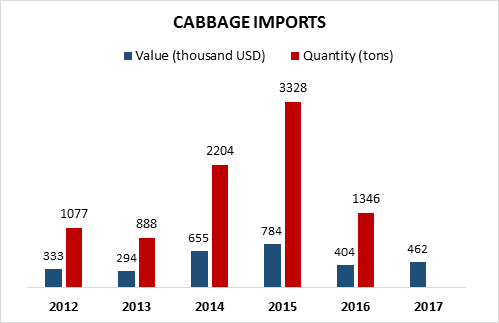 According to the trade statistics, both the import value and quantity of cabbage follow the same trends and are quite volatile. Given that in 2017, the value of cabbage imports for January-April is already higher than for the whole year of 2016, the increase in cabbage prices is quite surprising. In the first quarter of 2017, import value amounted to 462,000 USD, which is a bit higher than 404,000 USD for 2016, and the year has just begun. It is true that most imports occur during the first half of the year, and are almost zero in summer; they usually start to increase by the end of the year. This means that imports for 2017 most likely will be much higher than in 2016, which should contribute to a decrease in prices unless domestic production is extremely low.