During the last couple of years, wheat flour prices in the major supermarkets of Tbilisi ranged from 1.8 GEL/kg to 2.1 GEL/kg. According to the diagram, wheat prices were relatively low during the first half of 2015 but increased in the second half of the year. 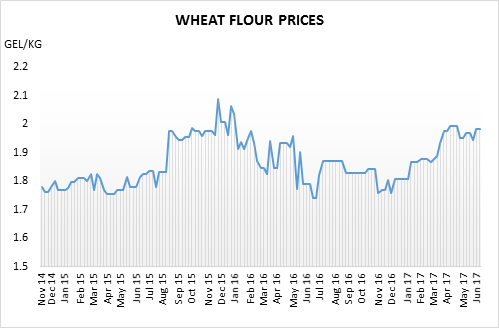 The same price dynamics were observed for 2016 as well. Currently, prices are relatively high, though domestic production of wheat, as shown by Geostat’s latest report, is steadily increasing.

According to the table, the increase in production is paired with a decrease in imports and a higher self-sufficiency ratio (from 7% in 2014 to 19% in 2016), which might be an early sign of a relatively successful import substitution strategy. However, it should be noted that the total supply of wheat was lower in 2016 compared to previous years, which implies that one should carefully monitor the total supply figures in order to avoid shortages, which usually result in price spikes.