Although milk prices increased on a biweekly basis, they exhibited a decreasing trend as summer began. As shown in the diagram, in 2017, prices are higher compared to the previous year. Most notably, they do not follow usual dynamics in milk supply. One would expect the highest prices in winter when there is normally a shortage in milk supplies, and the lowest price in summer, when milk is abundant, but the diagram shows the highest prices in spring. 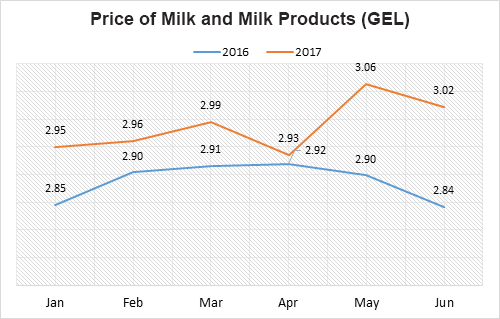 This trend can be explained by the wide usage of imported milk powder. Import data shows quite a significant (35%) increase in milk and milk products’ imports in 2016, as compared to 2015. Since fresh milk products are less likely to be imported from abroad, one can assume that milk powder is the major product in this category. According to Geostat, in 2017, domestic production of milk and milk products decreased by 4.6%, whereas imports increased by 34.8%, compared to 2015. A decrease in domestic production and an increase in imports were observed in 2014-2015, as well. Moreover, the self-sufficiency ratio for milk and milk products also gradually decreased from 90% in 2014 to 87% in 2015, and an even lower 82% in 2016, which signals problems in the Georgian dairy sector.

The Deep and Comprehensive Free Trade Area (DCFTA) and the regulations that are to be adopted in its framework, might be contributing to structural change and modernizing of the dairy sector. The Government of Georgia has developed technical regulations for the dairy sector that among other things, forbid the usage of milk powder in cheese production. This regulation will come into force on July 1, 2017, and will affect the supply of milk and milk products and thus their prices.