In the middle of September, food prices increased by 12% y/y (that is, compared to September 2016).

The majority of food products in the bundle became more expensive compared to the same period of the previous year, leading to an overall increase of 12% in the food prices offered by the largest supermarkets in Tbilisi. This finding is in line with Geostat’s data, which confirms an increasing trend in food prices and shows that the major drivers of the increase are fruits, vegetables, and dairy products. 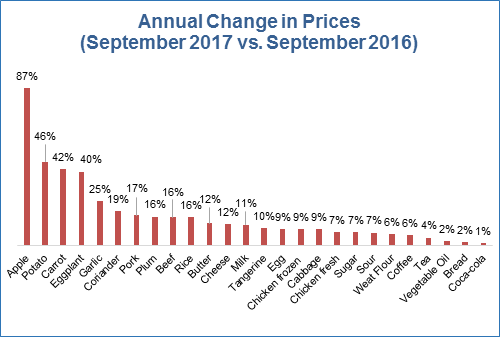 Since seasonality is not contributing to the yearly changes, one has to look for other reasons to explain such a large increase in food prices. Given the increasing number of tourists willing to explore Georgia, increased demand from tourists may be a possible explanation for higher food prices. According to the latest data from the Georgian National Tourism Administration (GNTA), in August of 2017, the number of international arrivals in Georgia amounted to 1,080,449, representing a 27.4% increase over the same period in 2016. Out of the total number of visits, 573,368 lasted longer than 24 hours, which corresponds to the annual increase of 27.2%.

Prices might stabilize by the end of September, as vacations are over and everybody gets back to work and school.