IN THE SPOTLIGHT: POTATOES 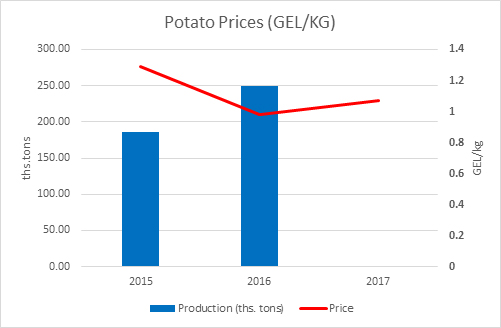 Such periodic fluctuations, when prices increase and decrease consecutively, might be explained by the cobweb model concept. According to the cobweb model, producers' expectations about future prices are assumed to be based on their observations of prices in the past. Price expectations obviously affect production-related decisions. Thus farmers, who observed high potato prices in 2015, decided to plant more potatoes with an expectation of high prices and, therefore, high profits in the next year (2016). However, increased supply due to increased production in 2016 caused a decrease in prices. If the cobweb model holds, then the increase in the potato prices observed in 2017 should be paired with decreased production. One can check if that holds true once the figures on potato production are available at the end of the year.

Since price is not the only determinant of production, it is important to consider other factors as well. The International Potato Center (known by its Spanish acronym CIP) has started to explore the potential of Georgia’s potato sector, which might lead to more research and investment, and ultimately higher outputs.