Agriculture in Georgia: Are There Any Real Changes in the Sector?
Home ISET Economist Blog

After years of negligence, from 2012 onwards, Georgian agriculture returned to the spotlight. State funding for the sector grew from 85 mln. GEL in 2011 to more than 200 mln. GEL in the consecutive years, and up to 293 mln. GEL in 2020. The state launched more than ten agricultural support programs and established a separate agency, the Agricultural Projects Management Agency (APMA), in 2013 for their management. Those engaged in agriculture obviously welcome the increased state support to the sector, however many now question the results. The various outcomes of state spending in agriculture have since become a hotly debated topic in 2020 – an election year.

HOW MUCH DID THE STATE SPEND ON AGRICULTURE AND WHAT WERE THE RESULTS?

In order to tackle this question, it will be helpful to look at certain macroeconomic indicators, like production, investments, prices, and employment in agriculture.

In spite of increased public spending in agriculture, there is no real growth in the sector. The statistics show that the average annual public spending on agriculture between 2010-2019 was 275 mln. GEL, with a particularly high annual budget expenditure of more than 300 mln. GEL in 2015-2017.

While agricultural GDP in 2013-2016 was higher than in 2010-2012, there is a clear downward trend in growth from 2013-2016. The period of recession coincided with the highest public spending on agriculture; with the recession peaking in 2017 due to a stink bug invasion. The infestation appeared in 2016 and significantly damaged one of Georgia’s major agricultural crops – hazelnut. While hazelnut production suffered the most, the sting bug also damaged other crops and eventually led to one of the lowest levels of agricultural GDP (2,380 mln. GEL) in the decade. Unlike 2017, 2018 was the most successful year in Georgian agriculture over the last decade due to the following:

• An increase in the production of annual crops: of wheat, maize, and vegetables compared to 2017, though still lower than in 2016.

While public spending affects agricultural GDP, the other reasons affecting agricultural output include the sector’s dependency on weather and the relatively long payback period for state-funded agricultural programs.

While agricultural GDP peaked in 2018, FDI, on the contrary, marked its minimum level, with divestment of 3 mln. GEL in the sector in 2018. 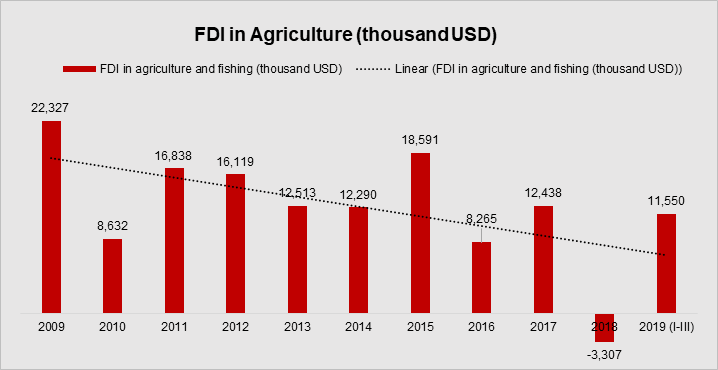 Certain major drivers for the low FDI in agriculture are:

• The well-known, and hotly debated, ban on the purchase of agricultural land by foreigners;

• Political instability and tensions – many protests have taken place in the streets of Tbilisi over the last two years.

FDI in agriculture constituted, on average, 1.1% of the total FDI in Georgia for 2009-2019. Overall, it shows a downward trend, despite the depreciation of the Georgian lari. While currency depreciation usually positively affects FDI, in Georgia, so far, there is no evidence of this.

There has been a significant increase in food prices in recent years. The latest statistics show that food prices have increased by 12.7% (Geostat, 2020). The two-digit inflation in food prices persisted throughout 2019 and was driven mostly by domestic currency depreciation, leading to more expensive food imports. Although increased public spending should have contributed to the expansion of domestic production, and a reduction in import demand and prices, apparently a slight increase on the supply side could not offset other negative impacts. The higher demand for food, due to the development of tourism and more importantly depreciation of the lari, has offset increased domestic production and resulted in greater food imports at higher prices.

Given the significant spending on food (43% of household total spending in 2018), food price inflation puts enormous pressure on the Georgian population, which still heavily depends on social transfers from the state, particularly in rural areas, where poverty affects 23.1% of the population (Geostat, 2020).1

Note: The author assumes that the self-employed in the rural areas are working within agriculture.

Employment shares in agriculture show a downward trend, however, the change in the percentage of shares is very limited, from a maximum of 37% in 2011 to a minimum of 33% in 2018.

While public spending in agriculture has had some positive impact on agricultural GDP, the remaining indicators show the need for more reforms and structural changes in the sector. Public spending cannot replace investment, and so far, it has not increased domestic production to the extent where Georgia is no longer dependent on food imports and vulnerable to food price shocks.

1 The share of the population under the absolute poverty line (%).

Tags: #employment, #fdi, #food, #production, #agriculture,
The views and analysis in this article belong solely to the author(s) and do not necessarily reflect the views of the international School of Economics at TSU (ISET) or ISET Policty Institute.