Since When Do Georgians Trust Banks More Than Friends?
Home ISET Economist Blog

There are different ways to measure the success of nations. Various surveys are conducted and different indices are compiled to measure the well-being of countries across the world. Nowadays, there is an increasing interest to measure a country’s success not just in economic terms but far more broadly.

Fortunately, Georgia is getting better and better integrated into these types of comparative studies, giving us an idea of where we stand.

Table 1: Georgia’s recent rankings in a sample of surveys:

Legatum Prosperity Index 2012 is the one I will review today while focusing on the most interesting findings concerning Georgia’s ranking.

2012 was not the first time Legatum Prosperity Index was compiled, but it was the first time Georgia was included in the rankings. The rankings include 142 countries, with 32 countries added in 2012. Even though the index is dated 2012, most of the data come from previous years, mostly 2011.

Legatum Institute used some of the established theoretical and empirical research to identify the main determinants of prosperity. In total, the main index and its eight sub-indices are based on 89 selected variables. The eight sub-indices are Economy, Entrepreneurship & Opportunity, Governance, Education, Health, Safety & Security, Personal Freedom, and Social Capital.

Table 2: Georgia and a number of other countries in the Legatum Prosperity Index 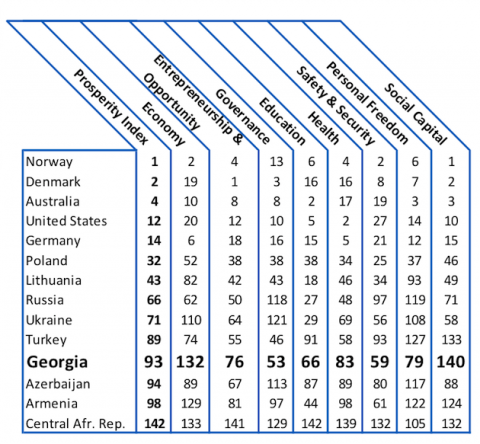 As we see, Georgia is doing relatively better in Governance, Safety & Security, and Education, while it ranks surprisingly low in Economy and Social Capital. The reader can see the detailed data on the Prosperity website. I will use the opportunity here to discuss the determinants of Georgia’s very poor performance in the Social Capital category and briefly go through a few key aspects of the economy sub-index.

The Social Capital sub-index evaluates the strength of social ties, trust among individuals, and the effect of marriage and religious attendance on well-being.

“Social networks and the cohesion a society experiences when people trust one another have a direct effect on the prosperity of a country. …. the term “capital” in “social capital” highlights the contribution of social networks as an asset that produces economic and wellbeing returns.”

The Social Capital sub-index was compiled using 7 variables: Trust in Others, Perceptions of Social Support, Donations, Formal Volunteering, Helping Strangers, Marriage Rate, and Religious Attendance. The table below provides a more detailed description of these variables presenting the data for Georgia as well as the corresponding global averages.

Except for the marriage rate, Georgia is below the global average in all categories. The most surprising fact is that only half of Georgians think they can rely on friends and family for help. That’s really mind-boggling. Is it no longer true that Georgians have very special family ties and understand fully what true friendship is?

It will be interesting to observe Georgia’s progress over time in Legatum Prosperity and other indices. Even more importantly, however, I hope that Georgia will indeed become a prosperous country where people trust each other and can rely on each other’s help, financially and otherwise. If that will be the case, we will not have to worry about any global indices. Until then, however, such indices help evaluate our progress and design better policies.

Giorgi Papava belongs to the very first cohort of ISET graduates, the class of 2008. After graduating from ISET he decided to continue his education abroad; currently, he is a Ph.D. student at the University of Chicago, USA. He has always remained an active member of the ISET community and continues to contribute to the school’s academic and extracurricular activities.

Tags: #agribusiness, #agriculture,
The views and analysis in this article belong solely to the author(s) and do not necessarily reflect the views of the international School of Economics at TSU (ISET) or ISET Policty Institute.