It is no secret that global competition for the best brains is as intense as ever. Having adequate human capital can put a country on a trajectory of perpetual growth, say economists. The ‘brain wars’ typically play out in the setting of national and multinational companies competing for talent, but some of the most intense fights happen between universities struggling to recruit and retain the best young minds on the planet. Even elite institutions such as Harvard, MIT, Stanford, Oxford and Cambridge are only as good as the quality of their last freshmen class. To grow and maintain their existing reputation, these universities need to attract the best students on an international level.

The brain wars are as intense on the national level, here in Georgia, as they are anywhere else in the world.

For over a decade, the International School of Economics at Tbilisi State University (ISET) has had remarkable success in attracting the best minds in Georgia to study economics at the Masters level. The program has propelled almost 300 Masters graduates on to fascinating careers in academia, the government and the private sector. Thanks to its growing reputation in the Caucasus region1, ISET has been able to expand its student base, as well as launch a new Bachelor degree program in Economics in 2017.

But just as with Harvard and Cambridge, ISET’s success rests on the quality of its incoming class. This year, a total of 53 students have embarked on the four-year journey to earn ISET’s first BA degree2. So, how do the new ISET BA students compare to other Economics BA hopefuls in Georgia? How competitive is the ISET program? Our team analyzed a trove of unique data from the cohort entering Georgian universities this year.

According to the National Assessment and Examination Center (NAEC), around 39,000 pupils participated in the Unified National Examination (UNE) this year. Furthermore, 28,176 pupils became university students. Only 50 students from this impressive number of candidates became ISET’s BA students.

GENDER AND REGIONAL DISTRIBUTION OF STUDENTS

If we look at the distribution of newly enrolled university students and their scaled scores by gender, we discover that both of these variables are gender-balanced. According to NAEC data, 51% of the entrants in 2017 were female, and the average scaled score for females was slightly (insignificantly) higher than for males. This finding is consistent with the global trend in university enrollment for women. In the United States, for example, women outnumbered men in colleges and universities since 1979, and the gender gap kept growing since then. Nowadays, 55-60% of entering bachelor students in the US are women. However, unlike in Georgia, women in the US tend to score consistently lower than men on an SAT college entrance test (Scholastic Assessment Test).

In the case of ISET, the gender distribution is more skewed towards male students, as 27 students out of 50 (54%) were male. On the other hand, the average scaled score for ISET female students was somewhat higher than for males.

Despite the more or less equal distribution of students’ gender generally, regional variation is notably skewed towards the capital of the country. As expected, Tbilisi was the most successful region in terms of the scores, followed, unexpectedly, by Gagra3, Rustavi, Akhalgori, Sukhumi and Kutaisi (see Figure 1). While not performing very well on average, Kutaisi is ranked second after Tbilisi, if we consider the best 50 students from each location.

In the case of ISET’s BA program, Tbilisi dominates as well (accounting for 80% of incoming students). The remaining students are from Kutaisi (6), Samtredia (3) and Terjola (1). The significantly higher share of Tbilisi students in the ISET BA program is puzzling, given the fact that ISET MA program is more regionally diverse. Does this finding mean that weaker students tend to enter full-time MA programs while stronger students enter employment right after finishing the Bachelor degree? The issue warrants a closer look, and will be explored in more detail in future ISET Economist blogs.

COMPOSITION OF THE DIFFERENT ECONOMIC PROGRAMS – THE DEMAND SIDE

In our investigation, we compared different educational programs in Economics based on the number of applicants and average scores in the UNE. There were more than 10 universities offering a variety of Economics programs. For a better comparison, we focused only on those programs that required mathematics as the fourth elective subject on the Unified National Exams, as ISET does.

The demand for different Economic programs can be measured by the ratio of the number of applicants that made a particular economics program their first choice4, and the number of vacant places. The leader in this regard is the Sukhumi State University, with 1.9 first choice applications per vacant place. ISET’s BA program is among the leaders, occupying the fifth position, with 1.6 first choice applications per vacant place. Notably, there were only seven educational programs in economics that had more first choice applications than places. If we look at the total number of applicants per vacant places, we will find that the competition increases drastically. For instance, in the case of ISET, this measure is seven applicants per vacant place. The number of applicants per place is one of the most popular measures of programs’ competitiveness. Yet, it tells nothing about the talent and/or the quality of enrolled students. For this purpose, it is important to compare programs based on the average scores of the UNE. The graph below shows the UNE scores for all educational programs in Economics. Clearly, ISET’s BA program is a leader in this regard, followed by Tbilisi State University, Sukhumi State University, and the International Black Sea University.

If we enlarge the sample by adding the most successful educational programs in business administration (a neighboring field of economics), we will find that there is only one program (the Free University of Tbilisi) that outperforms ISET in terms of students’ average grades, while the average scaled score of the business administration programs is significantly higher than that of economics programs in Georgia. 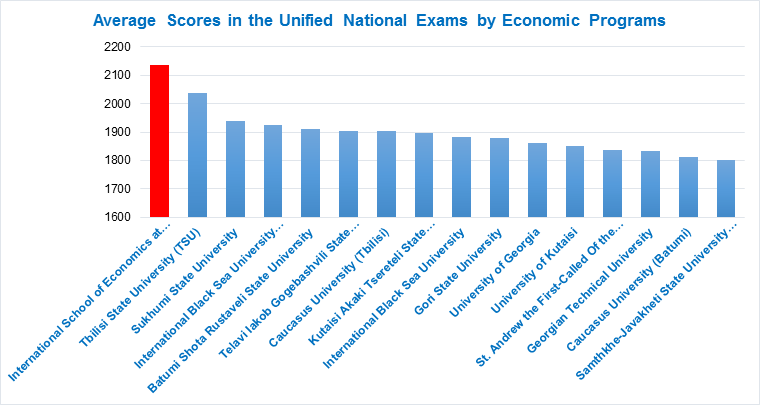 The last important observation that we can make based on NAEC’s data, but not the least, is related to the allocation of State study grants among newly enrolled students. In 2017, the structure of grant distribution did not change much compared to the previous year. The number of students whose study was fully financed was reduced to 1,009 students (1,112 students in 2016), and stayed nearly the same for students with 70% and 50% state grants (1,457 and 4,081 students respectively in 2017). In addition, this year 4,051 students were enrolled in the fully funded faculties5, while the same measure was around 3,800 in 2016. Two lead universities – Georgian Technical University and Tbilisi State University – are taking the vast majority of the students financed by the fully funded faculty system.

In terms of the State grant distribution, ISET’s BA program is one of the most successful, pointing to the high quality of the incoming class. Every single student in the first intake group received a government grant. Among them, 16 students managed to get a 100% grant from the State, while the number of students with 70% and 50% government grants was 30 and four, respectively.

Thus, the ISET community can confidently claim that the battle for the best brains in Georgia wishing to study Economics has been won this year. We wish our incoming class the best of luck. We are also very confident that the new BA program will earn the same reputation and recognition as the long-running Masters in Economics program.

1 The ISET MA program has also attracted students from all over the world – notably from Ukraine, Belarus, and as far away as Nigeria, India, and even Japan.
2 Of these, the majority (50 students) were enrolled through the Unified National Examination (UNE), and others were admitted through internal mobility from different programs of Tbilisi State University.
3 Gagra and Sukhumi are a town and a city, respectively, in Abkhazia, while Akhalgori is a town in the occupied part of South Ossetia. The majority of the students from these districts are refugees, living in different parts of Georgia.
4 Before taking the UNE, an applicant creates a list of all desired educational programs (the number of programs to choose is not limited). An applicant lists the programs from most desirable (first choice) to less desirable. The Applicant will be admitted to the first program from the list, for which he (or she) gets sufficiently high scores in UNE.
5 The fully funded faculties refer to a newly introduced (since 2013) system of providing full state grants for students enrolled in certain educational programs (such as agrarian sciences, education, engineering, mathematics physics, economics, architecture, archeology, etc.). Mainly these programs are related to the professions that were characterized by a shortage of qualified workers and this system is used by the Government as a means of addressing professional skills deficits in the Georgian labor market. In the first year of introduction, only 2,450 students were enrolled in these programs, but this number nearly doubled by 2017.

Tags: #georgia, #competition, #education,
The views and analysis in this article belong solely to the author(s) and do not necessarily reflect the views of the international School of Economics at TSU (ISET) or ISET Policty Institute.