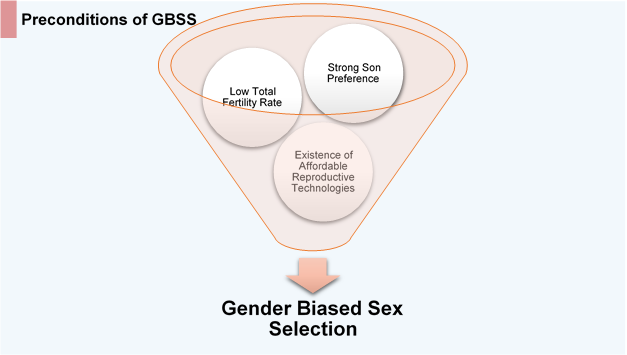 Several studies (UNFPA 2015, 2017; Duthé, G. et al., 2012) provided a detailed analysis of reproductive behavior and birth masculinity in Georgia. They found that the Georgian society always had pronounced son preference. Family in Georgia is patrilineal in nature3 and it is the place where traditions, national values, and identities are kept and respected. Sons in Georgia carry on the family name and continue the lineage, while daughters marry into other families. Males traditionally are considered as the main contributors to family subsistence, and the major source of support for their aging parents, while women are stereotypically perceived as natural caretakers, whose core responsibilities involve childcare and household duties.

The collapse of the Soviet Union was followed by seriously deteriorating economic conditions. The early transition period was characterized by civil unrest and armed conflict, corruption, and high levels of crime that led to a catastrophic socio-economic situation (stagnation, hyperinflation, extremely increased poverty levels, and growth-reducing structural change4). These factors may be considered among the most important reasons for the fertility decline, which further strengthened pre-existing son preferences. Decreased fertility was a strategy chosen by Georgian families to cope with the new economic reality. According to World Bank estimates, in just 5 years (from 1990-1995), the total fertility rate (TFR) fell by 0.3 percentage points and continued to decrease during the next ten years (see figure below). The relatively fast economic recovery of the country5 was accompanied by recovering fertility rate, starting from 2003. According to the 2014 census, the estimated total fertility for the year preceding the census was 1.98 children per woman.6 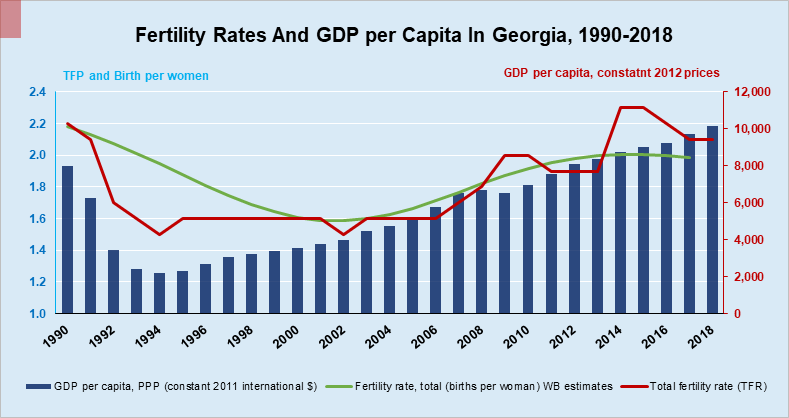 Low fertility rates in the first 15 years of independence coupled with improved access to reproductive technologies created a fertile ground for GBSS. In countries where high SRBs are well documented, sex-selective abortion has been the most common way7 of choosing the sex of the future child (Zeng et al 1993; Miller 2001; Guilmoto 2009). The first imported ultrasound machine detecting the sex of the fetus appeared in Tbilisi in 1987, and the first private clinic providing services to women opened in 1991. By 1995, ultrasound technologies were already spread throughout Georgia (Guilmoto, Dudwick, Gjonca, & Rahm, 2017). Thus, it can be said that Georgia’s SRB transition was an integral part of the overall transformation process of the country. After the collapse of the Soviet Union, SRB gradually increased in Georgia, and already in 2004 reached its historical maximum – 115.2 boys per 100 girls. Since then, the average SRB started to decline steadily approximately to the natural level. The dynamics of the sex ratio at birth are presented in the following figure.

It must be noted that Georgia is characterized by a high degree of regional diversification in terms of cultural values, traditions, and ethnicity. Not surprisingly, these differences are manifested in different levels of son preference across regions. 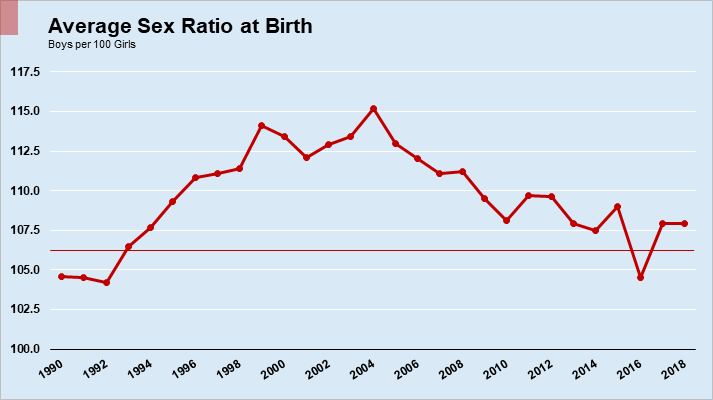 For example, Tbilisi has been characterized by one of the lowest SRBs in the country, reaching the normal level in 2010-2018. The other regions that now have SRB very close to the normal are Samegrelo-Zemo Svaneti, Imereti, Adjara, and Shida Kartli. Samegrelo-Zemo Svaneti is the best improver in this regard compared to 2005-2009. However, three southeastern regions –namely Kakheti, Kvemo Kartli, and Samtskhe-Javakheti – still have significantly higher SRBs than the Georgian average. It is worth mentioning that these regions share borders with either Azerbaijan or Armenia, or both, and have large ethnic minority populations which live compactly. This has implications in terms of social norms and inclusion of these populations in socio-economic processes that we discuss more in detail later in this text.

While there is vast literature studying the reasons behind the increase of SRB ratio in Georgia, there is no single paper identifying socio-economic and demographic factors behind the decreasing trend of gender-biased sex selection. ISET Policy Institute with UNFPA Georgia conducted a comprehensive study using qualitative (deep interviews and focus groups) and quantitative tools (econometric models – fixed and random effect models, spatial autoregressive and spatial Durbin models) to test the impact of various economic, social, and policy factors on GBSS. Here are the main findings of this study:

• Despite the downward trend in SRB, son preference still prevails in Georgian society. Recognizing son preference as a problem is an initial step towards the long-lasting process of balancing gender perceptions.

• Economic conditions played an important role in normalizing SRB ratios in Georgia through improving disposable income and providing for the possibility to have more children. As the incidence of GBSS is greater in poor families, regional poverty rates are a significant determinant of the SRB imbalances in Georgia. Thus, the recent reduction of poverty rates also reduced female disadvantage in natality. Focus group discussions reveal that external migration and remittances were among the most important coping strategies against labor market imbalances in Georgia.

• Labor market dynamics, especially structural transformation of the economy towards the service sector created new job opportunities for women in banking, retail trade, and other white-collar jobs. Female economic empowerment contributes to a reduction of sex ratio imbalances at birth through increased financial independence of women. As a result, women face less pressure from the other family members while making decisions related to family planning.

• As for the Pregnancy, Childbirth, Child Care, and Newborn Adoption Program, it has the potential to contribute to gender equality by giving mothers an opportunity to take care of their children, keep women in the workforce and increase father’s participation in the childcare process.  Quantitative analysis reveals a negative (but not robust) relationship between the program and SRB. The extremely low take-up rates of the program by fathers indicate that the program’s potential to contribute to gender equality and tackle the GBSS problem is not sufficiently realized.

• Male’s education has a statistically significant negative effect on SRB (surprisingly female education does not show a significant impact). This outcome could be explained by the fact that in Georgia, despite the recent positive trends, male family members are still the main decision-makers (in particular, regarding reproductive decisions).

• Study found that state program 1+4 aiming to integrate ethnic minorities into the Georgian society is important and has potential to reduce SRB in the future for the following reasons: it facilitates the integration of ethnic minorities into the society; provides an opportunity to receive higher education; reduces external migration; in case of Azeri minorities it reduces barriers for girls to receive education (general and higher) and decreases the probability of early marriage.

• Despite the fact that there are is no separate law regulating sex-selective abortions in Georgia, focus groups revealed that the recommendation of not revealing the sex of the fetus until abortion becomes illegal combined with the 139th Article of Law of Georgia on Health Care plays an important role in reducing the incidence of sex selection. However, unethical and inappropriate behavior of doctors contributes to high SRB ratios.

• Overall, the study found that improved macroeconomic conditions and stronger social protection schemes lead to a reduction of SRB in Georgia. In addition, the study identified a number of external factors contributing to this change – changes in norms and values. Focus groups showed that Georgian society is undergoing a process of value transformation in many regards, especially towards gender equality. However, this transformation seems to be happening slower among ethnic minorities living in Samtskhe-Javakheti and Kvemo Kartli due to limited integration into the Georgian society.

Based on the findings, several policy recommendations can be suggested to sustain and further advance the positive trend of SRB reduction in Georgia. It is evident that the issue of gender bias requires a holistic approach, involving social, economic, and cultural domains. The overall direction should be focused on promoting initiatives to further advance poverty reduction, strengthening gender equality and women’s empowerment, as well as overcoming gender stereotypes that lead to son preference.

This blog is based on the findings of the report “Social-Economic Policy Analysis with Regard to Son Preference and Gender-biased Sex Selection in Georgia” prepared for UNFPA Georgia by the ISET Policy Institute (ISET-PI) team as a part of the UNFPA Global Programme to Prevent Son Preference and the Undervaluing of Girls: Improving the sex ratio at birth in select countries in Asia and the Caucasus (2017-2019).

1 including countries from Eastern Europe, Caucasus Region, and Eastern Asia
2 Based on sample regression surveys.
3 Patrilineality is a common kinship system in which an individual's family membership derives from and is recorded through his or her father's lineage.
4 People started to move from higher productive sectors (for instance manufacturing) to less productive sectors, such as agriculture.
5 Country’s average real GDP growth rate for 2003-2007 was 9.6%. Source: WB. World Development Indicators.
6 UNFPA, 2017. Gender Analysis of 2014 Georgian General Population Census Data. UNFPA, Tbilisi.
7 Other methods to increase the probability of having a child of the desired child are: preimplantation genetic diagnosis (diagnosis (Barush, Kaufman, and Hudson 2008) and albumin separation of sperm (Beernink, Dmowski, and Ericsson 1993).

Tags: #gender, #sex selection, #birth ratio,
The views and analysis in this article belong solely to the author(s) and do not necessarily reflect the views of the international School of Economics at TSU (ISET) or ISET Policty Institute.