The Inflation Targeting Framework of the National Bank of Georgia: Is It the Right Model?
Home ISET Economist Blog

As the Georgian Lari (GEL) briefly depreciated in September 2020, the National Bank of Georgia (NBG) once again became the subject of criticism for not being able to stabilize the exchange rate even though it had injected 120 million US$ into the economy. At a press conference (2020/09/16), the President of the NBG objected that the aim of the injection of US$ was not to strengthen the GEL since the NBG operated under a floating exchange rate policy. Rather, he went on to explain, the NBG’s constitutional duty was to ensure price stability on the basis of an inflation-targeting framework. It is only when the GEL movements on the exchange rate market raised the risks of inflation that the NBG would intervene to stabilize the currency. The recent injection of dollars in the economy had therefore nothing to do with exchange rate stabilization. This is a good opportunity to look back and wonder how successful the NBG has been at maintaining price stability. Does the inflation targeting framework adopted by the NBG serve its purpose?

Under inflation targeting, the central bank uses the instruments at its disposal to meet a publicly announced inflation target. Transparency and accountability are the two pillars of a framework that is expected to facilitate communication with economic actors. The NBG adopted inflation targeting in 2009. Since then, actual inflation has been fluctuating quite a bit (see Graph 1). On a few occasions, however, it exceeded the bounds that had been communicated and even went into negative territory on a few others. Yet, overall, it is certainly fair to say that inflation has been brought back under control since 2009. It is also worth noting that when prices exceeded the target, the NBG brought them back in check. When inflation was very low, even negative, it sometimes took a bit more time but the NBG policies worked then too.

The inflation-targeting framework, therefore, seems to have served Georgia well. Could it have been used more effectively? To answer that question, one should investigate the various episodes when prices went substantially out of bound. 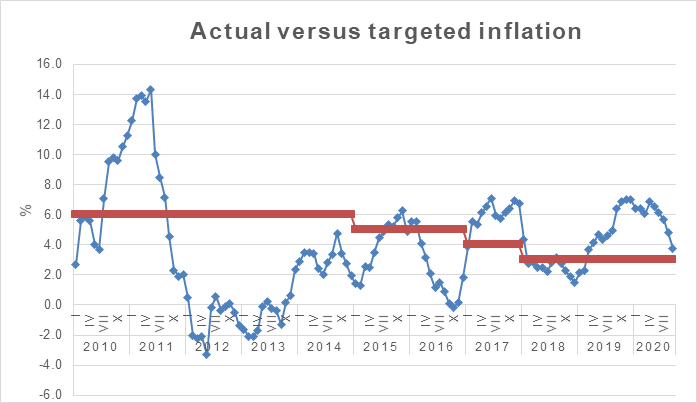 Here is a brief overview of the events that triggered the largest fluctuations:

• 2011 – a spike in food inflation: the highest spike in 2011 (of about 14%) was related to soaring international food prices. That year, the FAO food price index reached its highest level in 30 years. In Georgia, as in many other countries, food represents a large share of the average household budget.1 The NBG responded by increasing its rates so that expectations would not change.

• 2014-16 regional crisis: a plunge in oil prices at the end of 2014, led to a regional crisis. Aggregate demand in the major trading countries shrank. As a result, exports to- and remittances from these countries declined. The transmission of these external shocks continued throughout 2016. In subsequent months, international food prices declined, which helped bring inflation down. It even turned negative for a while before gradually converging back to the target.

• 2017 – local supply shock: inflation was mainly driven by an increase in excise taxes on tobacco and fuels.2 There was a twin motive for increasing those taxes: to reduce the budget deficit (there was a shortfall in revenue caused by changes in the income tax for businesses) and limit smoking and pollution. The NBG successfully brought inflation back to target by the end-2017 of and managed to curb the formation of inflation expectations.

• 2019 – political instability: in 2019, inflation accelerated due to a sharp depreciation of the GEL caused by political events resulting (June 2019) in Russia introducing a ban on its airlines flying to and from Georgia. This led to negative expectations concerning the tourism industry. Russia also threatened to ban Georgian exports. This increased uncertainty led to the GEL depreciation and inflation.3

• 2020 – pandemic: the COVID-19 pandemic lockdowns were followed by the collapse of tourism revenue which, together with declining exports, led to a depreciation of the GEL. Still, as we now approach the end of 2020, inflation seems to be on target, in part helped by lower aggregate demand.

A review of the past events that led to major deviations from targets reveals the importance of external factors. The NBG explains that it activates its monetary tools when the shock is from the demand side. When it comes to supply-side exogenous shocks, it usually does not react, since doing so might lead to high economic and social costs. However, if a deviation is so significant that it may impact inflation expectations, the NBG is ready to react.4 When deviations were caused by local shocks (i.e. in 2017) the deviation was indeed generally smaller and quickly dealt with.

Price fluctuations are frequent on the international commodity markets and a small country like Georgia will necessarily import those fluctuations. This vulnerability to external shocks is common to all small open economies and, as a result, the central bank could have decided not to adopt an inflation-targeting framework, or to adopt a framework that would restrict the targeting to domestic prices. International experience suggests that the latter approach is not satisfactory because economic actors face prices that include those of imported products. Besides, efficiently communicating becomes very difficult when referring to core inflation or any measure other than headline figures.

By adopting its inflation-targeting framework, it seems that the NBG has adopted the right approach (e.g. since 2010, annual inflation has been 3.7% on average). The price to pay is that the NBG is not always able to take swift corrective actions in a way that would fully cushion the economy from external shocks in the very short term. It will always take a bit of time. Yet, the NBG has been successful in eventually bringing inflation back under control when a shock triggered a deviation. The bottom line is that the inflation-targeting framework has served Georgia well so far. It focuses on the right metric by targeting headline inflation and the NBG has been rather successful at managing expectations.

Tags: #lari, #monetary policy, #inflation, #depreciation, #georgia,
The views and analysis in this article belong solely to the author(s) and do not necessarily reflect the views of the international School of Economics at TSU (ISET) or ISET Policty Institute.