According to Merriam-Webster’s dictionary, the word gay refers to a cheerful, lively, and high-spirited person. The LGBT Prague Pride Parade, which I was fortunate to observe on my recent visit to Prague, lived to the very definition of the word. What I saw was fabulous: unicorns and countless rainbow-colored flags, balloons, and thousands of exalted people dancing and singing in the middle of Wenceslas Square. The parade was bristling with so much enthusiasm and happiness that I, quite instinctively, was sucked in and followed the procession.

Prague is a place that is never lacking in joy, but the parade added an extra layer of opulence and extravagance. The local Roma community joined with their traditional folk dance and song. Later it was reported that a Roman Catholic nun, the Mayor of Prague, as well as local celebrities and politicians also took part. And everyone marched in unison all the way from Prague’s center to the Old Town and by the banks of river Vltava. The procession culminated in front of the famous Prague Metronome – a symbol of human freedom and the right to choose one’s own path, commemorating those Czechs and Slovaks who fought against totalitarian oppression.

With all the cultural benefits Prague garnered by organizing the LGBT parade, it was also able to attract thousands of tourists from all over Europe who flocked to Prague to observe and participate – no small contribution to the Czech Republic’s already strong tourism industry. Having experienced the beauty of the city’s magnificent baroque architecture, and the delight of Czech food and beer, many of these are likely to return in years to come (and even bring curious friends!).

LGBT RIGHTS IN GEORGIA. WHAT RIGHTS?

In order to make good on the terms of its Association Agreement with Europe (and secure an easing in EU’s visa restrictions), Georgian policymakers have been hard at work copy-pasting bureaucratic regulations, many of which make little sense in Georgia’s economic realities. Yet, a major gap remains in Georgia’s ability to adapt, even if formally, some of the fundamental norms at the core of European civilization. 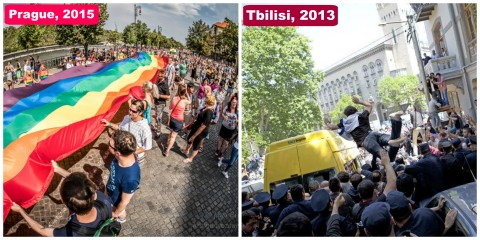 A Pride Parade is yet unthinkable in Georgia. The first (and last) attempt by a small group of pro-LGBT activists to organize an anti-homophobia rally in May 2013 was violently broken by a mob of “Christian” believers armed with crosses and sticks, and led by Orthodox priests. The mob was apparently encouraged by Georgian Patriarch Ilia II who insisted that the rally be banned and dubbed homosexuality an “anomaly and disease”. As a result, 17 people were injured; 12 of those were hospitalized. In 2015, well into the 21st century, members of the Georgian LGBT community and pro-LGBT activists fear for their lives and refrain from openly expressing their views.

Given the totally peaceful and joyous nature of LGBT rallies, one cannot but wonder: why is the Georgian Orthodox Church (which is supposed to carry the Christian message of peace and love for all) so adamant about instilling hatred, paranoia, and homophobia on such an epic scale?

A clue may be provided by Aldous Huxley’s 1932 novel Brave New World in which Ivan Pavlov’s ideas of classical “conditioning” are used to create a vision of a dystopian society populated by programmed and easily controlled zombies. Just like in Pavlov’s experiments, people living in Huxley’s imaginary world are “conditioned” at an early age in the special Hatchery and Conditioning Centers where they are given electroshocks while being shown flowers and books.

It seems that church authorities have unearthed the secrets of Pavlovian conditioning long before Pavlov himself made his discoveries. William Sargant makes this point in his 1957 book Battle for the Mind: A Physiology of Conversion and Brainwashing, in which he argues that influential religious leaders have effectively used Pavlovian techniques to spark religious zeal and fanaticism. Psychologically terrorizing their subjects by delivering extensive sermons on the woes of hellfire and then releasing them from stress by offering delights of heaven, church leaders made people receptive to religious messages and easy to control. As Sargant puts it “The most kind, generous and humane people have in fact been conditioned… to commit acts that appear horrifying in retrospect…. Many otherwise sensible people cling to strange and cruel views ….”

THE USE AND ABUSE OF MORAL AUTHORITY

The Georgian Orthodox Church is Georgia’s single most influential institution, seen by many as the ultimate moral authority on matters ranging from human rights to local governance to international politics. And great authority, of the kind enjoyed by the Georgian Patriarch, comes with great responsibility.

On the one hand, a pastor or teacher’s authority could be used to instill values and motivate. Yet, on the other, it also has the potential to turn absolutely normal people into sadists, as was explicitly demonstrated by the Milgram Experiment. Conducting his experiments in 1963, shortly after the German Nazi war criminal Adolf Eichmann was brought to trial in Israel, Milgram showed that a person in a position of authority can persuade experimental subjects (performing the role of ‘teachers’) to willingly torture their ‘students’ by administering a series of painful electric shocks culminating with the deadly 450-volt treatment (!).

The kind of hatred and phobia sown by many Georgian priests towards the LGBT community – and the violence some of them preach – are not signs of responsible moral authority and leadership. While some church members may believe that keeping people focused on imaginary LGBT foes and their deadly sins would be a great way for the church to cement its ‘infallible’ authority, it also has the effect of polarizing the society, creating an atmosphere of intolerance, and pushing moderate and liberal-minded Georgians away from the Church.

GAY-FRIENDLY TBILISI – A REFLECTION ON GEORGIA’S OWN PAST?

According to a recent National Democratic Institute (NDI) poll, 68% of the Georgian people support the country’s association agreement with the EU, which for the majority is not so much about immediate material benefits but symbols and values. This is no coincidence. Progressive ideas have never been alien to the Georgian psyche. Through the middle ages, while fires of inquisition have been raging all over Europe, Tbilisi was known as an oasis of tolerance where representatives of all three major Abrahamic faiths could pray on the same street. Furthermore, gender equality – a notion yet to be fully accepted in many 21st century Western democracies – has been sung in the remote past by the most famous Georgian poet, Rustaveli.

* In a moving and personal talk, activist and researcher Natia Gvianishvili tells her story of coming out, the unexpected reactions, and why community and public attitudes are critical.

Thus, to become a modern, civilized, European state, Georgia does not need to borrow ideas of tolerance and equality from other nations. What Georgia needs is to sincerely reflect on its own past and make an uncontaminated judgment on how to move forward. Georgia nowadays faces a historic opportunity to embrace the inevitable and become the first country in the South Caucasus to declare LGBT equality and once again become an oasis of tolerance.

As a genius filmmaker Steven Spielberg said “Life breaks free, it expands into new territories… life finds a way.” Human rights for all Georgians will find a way. It is inevitable and, yes, it even makes sense economically.

The content of this article is the sole responsibility of the author and can in no way be taken to reflect the official policy or position of ISET and the ISET Policy Institute.

Tags: #equality, #lgbt, #human rights, #tourism, #religion, #media, #democracy,
The views and analysis in this article belong solely to the author(s) and do not necessarily reflect the views of the international School of Economics at TSU (ISET) or ISET Policty Institute.

Norberto Pignatti
Energy security and the transition to a green economy. Is the Georgian media ready?
In previous articles we have discussed the visible deterioration of Georgia’s energy security, where energy demand keeps increasing and the share of domestic energy sources in overall primary supply (the gross amount consumed by the country over one year) is declining. Reversing this trend requires the country to accelerate the pace that it develops domestic – and mostly renewable – energy generation capacity; ideally in combination with greater efforts to improve energy efficiency.