Does Georgia Have One of the Largest Shadow Economies in the World?
Home ISET Economist Blog

In January 2018, an IMF Working Paper published new results on the shadow economy situation for 158 countries from 1991 to 2015. According to Medina and Schneider (2018), the shadow economy in Georgia during that period constituted, on average, 64.9% of GDP – the highest indicator in the world! In 2015 (the last year available), things were slightly better for Georgia, with the share of the shadow economy standing at 53%. Still, our country was “outshone” only by Zimbabwe (67%) and Haiti (56%) in the world rankings. To add insult to injury, Georgia’s results were far worse compared to other CIS countries and its immediate neighbors.

Given Georgia’s reputation as one of the toughest and most successful reformers in the post-Soviet space, the news is clearly shocking. And yet, the potentially explosive results escaped the notice of the broader public, as media and government representatives largely dismissed them, arguing that the numbers are improbably high and there must have been something wrong with the IMF methodology.

Interestingly, the IMF study does not explain the reasons for the abnormally high level of the shadow economy in Georgia – it didn’t even mention Georgia in the executive summary posted on the web-page when talking about first and last countries in the ranking: “The average size of the shadow economy of the 158 countries over 1991 to 2015 is 31.9 percent. The largest ones are Zimbabwe with 60.6 percent, and Bolivia with 62.3 percent of GDP. The lowest ones are Austria with 8.9 percent, and Switzerland with 7.2 percent” – No, the largest one, according to the study, is Georgia!

Was it just a typo or, as the conspiracy theorists would have it, Georgian authorities unofficially asked the authors to exclude the mention of Georgia from the narrative? Or is it that the authors themselves chose not to mention Georgia, as they could not explain how the country ended up in the top position? I posed this question in an e-mail to the IMF, but as yet have not received a response. Still, my blog is not about solving the mystery behind the conspiracy theories. Rather, I would like to focus attention on the concept and various measurements of the shadow economy, in order to try and figure out whether Georgia indeed deserves the title of the country with one of the largest shadow economies in the world.

WHAT IS A "SHADOW ECONOMY" AND HOW IS IT MEASURED?

What do the IMF authors mean by “shadow economy,” and how do they estimate its size? These are key questions because an internationally accepted definition of the shadow economy does not exist. Scholars differ on both the definition and scope of the term. The terms parallel, second, hidden, gray, black, lack, underground, unofficial, cash, or informal economy – all are synonyms used to describe the shadow economy and capture its different aspects. Medina and Schneider used the following definition: “The shadow economy includes all economic activities, which are hidden from official authorities for monetary, regulatory, and institutional reasons. Monetary reasons include avoiding paying taxes and all social security contributions, regulatory reasons include avoiding governmental bureaucracy or the burden of the regulatory framework, while institutional reasons include corruption law, the quality of political institutions and weak rule of law.”

Thus, according to this definition, and ideally, the shadow economy measure should exclude value-added created by self-employed persons such as individual farmers, taxi drivers, car and household good repairmen, tutors etc. All of them are exempted from paying taxes and/or are not currently obliged to be officially registered in Georgia.

This approach is also reflected in the national statistics of Georgia’s definition of the non-observed economy (NOE). Figure 2 below sketches a detailed roadmap on what is and is not considered an NOE (shadow economy). Each enterprise or firm can be put into one of seven categories (N1 to N7), but only a few categories - colored in grey on the chart - reflect the non-observed part of the economy (N1, N2, N5, N6, and N7).

To make things clearer, let’s consider a few life examples: my friend’s father is a car mechanic; his business officially has the status of micro business, and therefore Georgian law exempts him from any taxes. Accordingly, in this table he belongs in the N4 category – registered legal person, assuming, of course, that he correctly reports his income to a Revenue Service officer. His reported numbers are included in the official statistics (observed economy). Now let’s imagine that he underreported his business income to the Revenue Service in order to maintain his micro business status. In this hypothetical case, he would drop to the N6 category, and NOE would increase by this underreported amount. If, however, his business was not registered, as the law prescribes, he would be an underground producer (N1), which is also part of the shadow economy. Another example: my friend’s grandma is a traditional Georgian farmer who grows tomatoes, cucumbers, hazelnuts, and grapes, and makes wine for her own use, for selling on the local market, or for bartering with her neighbors. She is a classical representative of the N3 category, and her economic output is estimated and included in the observed economy by Geostat. However, if she were to grow cannabis in her backyard for sale or her own use, she would become an illegal producer (N2), and this part of her activities would expand the shadow economy.

To sum up, N3 and N4 categories belong to the informal (but not shadow) economy sector, and Geostat includes them in the national accounts using the agricultural, household, and business surveys. To measure the “grey areas” of the economy, Geostat uses data confrontation and discrepancy analysis, and special-purpose surveys according to international methodology (Handbook for Measuring the Non-Observed Economy, OECD (2002)). According to this approach, the size of the shadow economy in Georgia was about 10.3% of GDP in 2015 – a far cry from the 53.07% from the IMF study’s estimate for the same year. 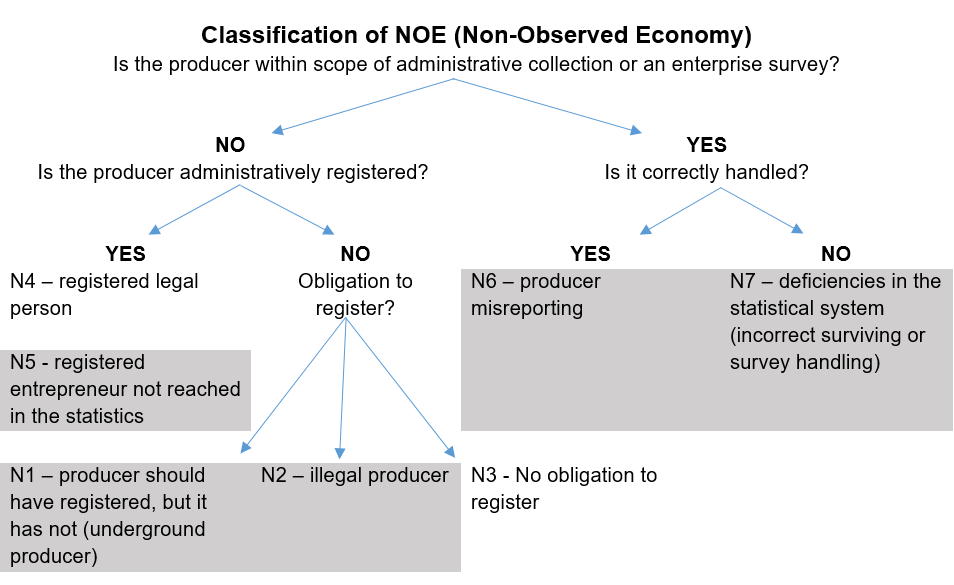 It may be unfair to compare these two very different methods for estimating the shadow economy. There are a whole bunch of different methodologies out there, and none of them are particularly accurate – each approach has its strengths and weaknesses. The experts in the field freely admit that their estimates of shadow economies vary widely depending on the chosen method (Schneider and Enste, 2002). For example, the above-mentioned study by Medina and Schneider used a new macro method – a Multiple Indicators, Multiple Causes (MIMIC) and Currency Demand Approach (CDA) in a structured hybrid-model based estimation procedure (does that sound scary to you? :) – then you are not alone).

Using panel data on 158 countries, this methodology first tries to estimate the size of a shadow economy (the so-called latent, or “hidden” variable) as a function of several other variables, such as unemployment rate (+), size of government (+), trade openness (-), GDP per capita (-), fiscal freedom (-), rule of law (-), control of corruption (-), and government stability (-). After this procedure, which gives only relative estimates of the size of a shadow economy, the authors use the Currency Demand approach to get absolute values1.

The results for Georgia were terrifying – 53% of GDP in 2015, higher than in Myanmar, Benin, Congo, Belize, and Nicaragua – I refuse to believe it. Of course, Georgia is not the “best performer” in terms of corruption control or government efficiency measures, but it is certainly not among the worst performers.

So far, the only plausible explanation is that Georgia is somewhat of an outlier among the cohort of post-Soviet economies. Despite its high rankings for ease of doing business, the country has a very high self-employment rate – nearly 60% of total employed. Among the former Soviet countries, only Azerbaijan has a higher share. If, in addition, the Georgian informal sector is more likely to use domestic (lari) cash for transaction purposes (not USD, Euro, rubles, or barter), then the CDA approach would be capturing these transactions as part of the “shadow economy”.

So, if I were to choose between the two methodologies, I would give preference to the Geostat method. It may not be precise, but at least it attempts to take into account Georgia’s status as an economy with a large informal sector.

If, however, you believe that Geostat ‘s estimates are too low, and the recent IMF study is closer to truth, then – congratulations, you are nearly 50% richer than you thought you were!

1 The CDA method is very commonly used for estimating the size of a shadow economy. The essence of this method is to compare the amount of cash in circulation with the “normal” amount of cash needed to support the registered size of the economy. Anything in excess of the normal amount is assumed to be supporting shadow economic activities. But if a country has an unusually large informal sector, as Georgia does, then the CDA method would tend to overestimate the size of its shadow economy.

Tags: #macroeconomics, #georgia, #shadow economy,
The views and analysis in this article belong solely to the author(s) and do not necessarily reflect the views of the international School of Economics at TSU (ISET) or ISET Policty Institute.