Your Guest Is My Guest, or Why Tourism Is Not a Zero-Sum Game 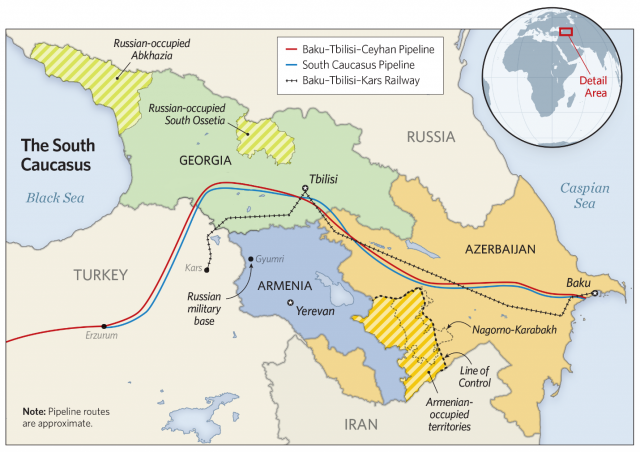 The South Caucasus is divided by high mountain ranges, often impassable political borders, and ethnic conflict zones. In addition to three independent states, the region also includes three unrecognized territories. Nakhichevan is separated from Azerbaijan’s mainland by Armenia’s Syunik region. Armenia’s border with Turkey and Azerbaijan, on the other hand, is sealed for political reasons.

Though trampled by politics, the economic arguments for greater regional integration in the South Caucasus are truly powerful. For one thing, thanks to its strategic location on the major North-South and East-West transport routes, the region could serve much larger flows of transit cargo and energy resources. And just like railways, roads and pipelines, intra-regional and international tourism could also provide strong stimuli for greater integration, soothing economic pain inflicted by years of conflict and isolation, helping build trust and overcome excessive fragmentation.

Each of the three South Caucasus nations carries significant touristic potential thanks to pristine and versatile landscapes and unique, centuries-old cultures. Not surprisingly, both Armenia, Azerbaijan and Georgia designated tourism as a key national priority, investing in infrastructure and international marketing, easing visa regulations, and improving border crossing procedures. Yet, while going it alone may be a fine strategy in the short run, one should also consider the synergetic effect from doing it together, and potentially engaging other neighbors as well – Russia, Turkey and Iran. Indeed, by fully harmonizing border management procedures, improving communication and transport linkages, and making a joint effort to promote the region as a world-class touristic destination, the South Caucasus as a whole could unlock new, lucrative markets for high-end tourism in the Gulf, Eurasia, Western Europe and North America. Geographical proximity between Georgia, Armenia, and Azerbaijan and the low cost of intra-regional transportation could attract tourists who would never come to this region for the sake of visiting only one (small) country. As an African proverb goes, if you want to go fast, go alone. If you want to go far, go together.

THE MANY FACES OF TOURISM

Is every foreigner arriving in Georgia automatically a “tourist?” Not really. According to the formal definition used by GNTA, a tourist is an individual that spends at least 24 hours in a country different than his or her country of residence. In this sense, a truck driver carrying goods from Turkey to Azerbaijan via Georgia is not a tourist. There is also the concept of transit tourism, which defines the activities of a genuine, international tourist passing by or crossing a country, which is neither the country of origin nor the country of destination (for example, an American tourist heading to Armenia, but spending a couple of days in Georgia). Just like the traditional definition, transit tourism does not include visitors who stayed in a country for less than 24 hours.

Despite the fact that transit tourism has been long known to be an important phenomenon in many developed and developing countries, international economic literature hardly addresses this issue. This type of tourism was first discussed by Markovik for Yugoslavia, and later Croatia (Angelkova, Petkova & Cvetanka, 2015). Nowadays, however, there is not even a consensus among scholars about the definition of this term. 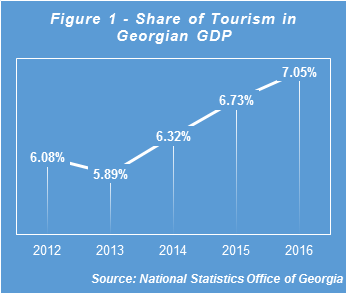 Georgia is emerging as one of the fastest-growing travel market worldwide. According to the Georgian National Tourism Administration (GNTA),1 in 2016, the total value added in the tourism sector increased by 11.8%, compared to the previous year, and reached 2.06 billion lari. The growth rate of the tourism sector was significantly higher than the growth rate of the whole economy. As a result, the share of tourism in GDP continued to increase and reached 7.05% (see Figure 1). Moreover, approximately 64.3% of Georgia’s service export revenue comes from tourism, and this sector generates 2.17 billion USD in foreign exchange income for Georgia, which is two times more than income from remittances.

In the first nine months of 2017, according to Georgia’s Ministry of Internal Affairs, the country hosted about 2.7 million tourists. Out of these, at least2 450 thousand people (16.5%) visited more than one country – Georgia and an immediate neighbor – and, thus, could be considered “transit tourists.”

Several conclusions emerge from the data presented in Table 2.

• “Georgia & Armenia” package is the most popular when it comes to regional tourism. In January-September 2017, at least 123 thousand tourists (accounting for 27.3% of total transit tourism) arrived to Georgia from Armenia or the other way around. Another 25 thousand came to Georgia from Armenia and continued to Turkey or vice versa. Finally, almost 11 thousand used Georgia as a springboard for visiting all three South Caucasus nations. In total, almost 160 thousand visited both Georgia and Armenia.

• “Georgia & Turkey” package is second in popularity, attracting almost 114 thousand tourists in the first 9 months of 2017 (25.3% of total transit tourism). In combination with Azerbaijan or Armenia, the Georgia & Turkey package accounts for almost 242 thousand visitors, leaving other packages far behind.

• “Georgia & Azerbaijan” package is third in popularity, attracting 48 thousand tourists in January-September 2017 (10.7% of total transit tourism during this period). When combined with Turkey or Armenia, Georgia and Azerbaijan served an additional 113 thousand visitors, bringing the total for this package to more than 161 thousand.

How many of the “transit tourists” are real tourists as opposed to truck drivers, who face delays at the border or have other reasons to extend their stay in Georgia beyond 24 hours? While precise information is not available, we can “guesstimate” their share by excluding Azeri, Armenian and Turkish nationals from transit tourism “packages” involving their own countries (e.g. Turkish or Azeri drivers on the Turkey-Georgia-Azerbaijan route, or Armenian and Turkish drivers on the Turkey-Georgia-Armenia route). Excluding professional drivers, the two winning packages (by a large margin) are Georgia & Armenia, and Georgia & Turkey.

Not surprisingly, these two packages also represent the fastest growing segments in transit tourism involving Georgia. For example, the number of tourists on Georgia-Turkey and Georgia-Armenia routes in just the first nine months of 2017 was 6-8 times higher than corresponding figures for the entire 2010.

WHAT IS THE NATIONAL MIX OF TRANSIT TOURISTS?

Looking at the two dominant packages, two things stand out.

• Iran, Ukraine, Saudi Arabia, Belarus, and Kazakhstan account for 44.8% of all transit tourists on the Georgia & Turkey route.

Very importantly, the Georgia & Armenia route appears to be particularly promising when it comes to attracting high-end tourist from Asia and Western Europe, who tend to spend more on higher quality hospitality services and shopping.

Finally, something must be said about tourists who come to the South Caucasus in order to explore all three countries of the region. Their number is still quite low, a bit less than 11,000 in the first nine months of 2017. Yet, they represent a fast growing segment, increasing almost 5 times compared to 2010. Of particular note is the fact that a relatively large share of such tourists are long distance travelers, coming from places like Germany, US, and UK, Hungary and Russia, China and South Korea. Truly regional tourism in the South Caucasus is still hampered by many bureaucratic barriers and borders. Yet, its development demonstrates that tourism is not a zero-sum game, building the case for closer cooperation and coordination between countries in the region.

2 Given data limitations, we can identify as “transit tourists” only those visitors who used a land border crossing on their way in or out of Georgia, and are thus underestimating the actual volume of transit tourism through Georgia. For example, we do not observe visitors travelling to/from Tbilisi to Baku by air. On the other hand, we cannot identify truck drivers who take more than 24 hours when transiting through Georgia.