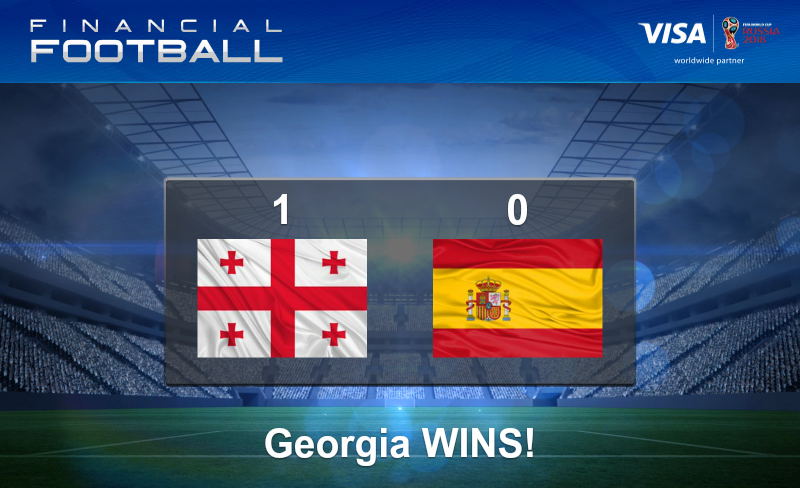 World Cup 2018 is getting close and football can already be felt in the air. The squads are almost finalized, new jersies are already on sale, and fan clubs are preparing venues to watch football. These are all traditional preparation for the World  Cup, but interestingly for me, and possibly for you as well, football has also affected education, specifically financial education. If you are intersted in how football and financial education are linked, Financial Football is the answer. To give you some background information before you test the game yourself, Financial Football is a project developed by VISA in more than 40 countries in the world. It is an interactive game that allows young people (but not only young people) to have fun and also test their financial knowledge. Last week VISA, in collaboration with National Bank of Georgia (NBG), launched the Georgian version of Financial Football. The launch event was opened with a panel discussion where the panelists highlighted the activities already implemented in Georgia to promote financial education. They also mentioned that to date, few financial education programs have been comprehensively assessed in terms of their effectiveness. This inspired me to start exploring the effectiveness of already-piloted financial education projects.

Let’s forget about Financial Football for a while, because it has just been launched and further reasearch cannot be done at this stage. But, thanks to National Bank of Georgia and the Ministry of Education and Science, we do have a financial education project called SchoolBank, which requires further elaboration.

SchoolBank is a project that was developed by Child and Youth Finance International (CYFI) and implemented by the NBG, in collaboration with the Ministry of Education and Science. The project aims at the economic empowerment of children and youth by providing them with access to appropriate banking products and economic citizenship education.

As emphasized in the National Strategy of Financial Education, the foundation of financial education should be built starting at a young age. At this early stage, it is easier to develop good personal finance management habits, and turn them into a culture. In the long run, by investing in youths’ financial education, it is possible for them to form useful attitudes and skills, which they will need to make better financial decisions. The positive effect of financial literacy program in Japanese schools, for instance, is summarized by Sekita (2011). He finds that if people save regularly when they are children, they are more likely to develop a plan for retirement when they become adults.

SchoolBank was piloted in 11 public schools in Tbilisi, Rustavi and Mtsketa for 3 months, starting last October and running until December 2017. The piloted SchoolBank project was mostly concentrated on a teaching component. The teaching module contains 15 topics related to personal finance, consumer rights and responsibilities, and topics related to the banking sector in general.

Q1. Attitude: I think that saving is useful;

Q2. Behavior: I regularly save money in a safe place;

Q3. Behavior: I always plan how to spend money;

Q5. Education: Suppose 10 children are given 250 Gel and 50 tetri If this money should be distributed equally, how much money each child will get?

Q6. Education: Suppose you make a 100 GEL deposit and the annual interest rate on deposit is 2%. How much money will you accumulate after 5th year?

Graph #1. The distribution of correct answers for the pre-test (number of respondents - 232) 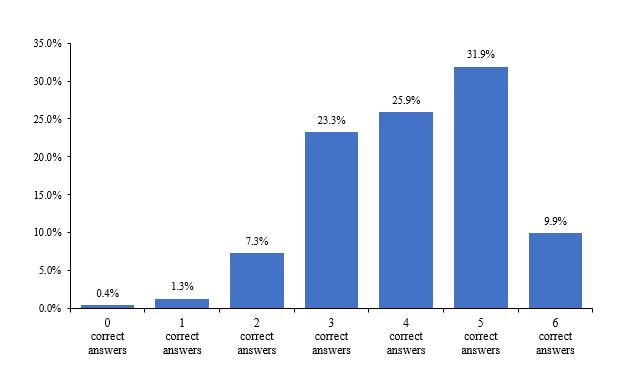 The distribution of financial literacy based on the pre-test results shows that the most of the students answered the majority of questions correctly. The distribution is left-skewed and there was only 1 student who answered all questions incorrectly. On average, 68% of the questions were answered correctly, which amounts to four questions out of six.

The data does not give the opportunity to use more sophisticated methods; instead, we focus on mean comparisons to evaluate the effectiveness of the SchoolBank project. It should also be kept in mind that the number of responses for pre- and post-tests are not the same. This means that 232 students started SchoolBank classes but only 161 finished it. The exact reasons for the drop-outs are not known, but it might affect the interpetation of the results. As we mentioned above, we measured the financial literacy before and after SchoolBank project for different sub-groups. On average, the level of financial literacy increased significantly, meaning that after the SchoolBank project, students answered 77% of financial literacy questions correctly, while the same indicator was 68% before the SchoolBank project. The study shows that such improvement of financial literacy is mostly driven by a significant increase of financial knowledge and attitudes, with the effect on financial behavior (answers to the following questions: I regularly save money in a safe place and  I always plan how to spend money) being very limited. These results are consistent with existing studies (Batty et al. (2015), Kalwij et al. (2017)) which conclude that in the short term, financial education programs contribute to financial knowledge and attitude, but need time to transmit financial skills to financial behavior.

Boys and girls recorded very similar financial literacy levels before and after SchoolBank project. This is intriguing, but because of the self-selected sample, we can’t conclude that in general boys and girls have similar literacy levels and that no gender inequality exists. The result might be driven by the methodology of the sample selection. SchoolBank is not a mandatory course, and only children who are interested in the topic are enrolled. This means that, more or less, children with similar interests and similar initial financial literacy levels are selected. We observe a statistically significant improvement of financial literacy in both groups. Before Schoolbank, both girls and boys answered 68% of questions correctly but afterwards the share of correctly anwered questioned increased to 77%.

Despite direct knowledge transition from parent to children, existing literature highlights the role of early access to financial products for children’s financial literacy. Specifically, when children already have a bank deposit they receive benefits in terms of knowledge that they gain when visiting banks, depositing money in accounts, calculating their interest income, becoming familiar with the time value of money, etc. (Friedline et. al (2012)).

To sum up, the SchoolBank pilot project has already finished, and we see it has some interesting and action-provoking results in terms of improving financial literacy among school children. We hope new tool offered by VISA and National Bank of Georgia will further enhance the skills of our next generation to deal with personal finances.