What Happens When Institutions are Designed to Provide Bullet-proof Protection against Fraud? 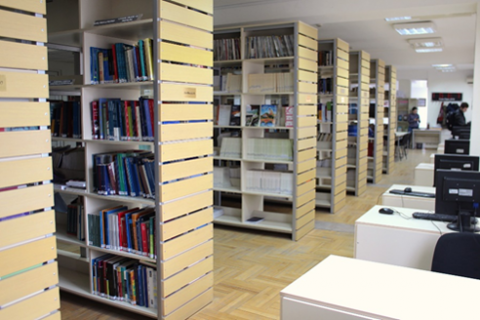 “Shock and awe” is a US military term describing the use of overwhelming power to demoralize the enemy, as applied by the American military in Iraq. “Shock and awe” would also aptly describe my emotional state when I entered, at the age of 23, the magnificent reading room at the Bodleian Library in Oxford. This was the moment when I – a former paratrooper and an officer with one of Israel’s security services – understood how badly I want to acquire an education. Not technical knowledge or skills, but an education.

“Shock and awe”, albeit of a different kind, would also aptly describe my feelings when inspecting, back in 2007, the space designated for ISET’s library. Previously occupied by a Soviet planning institute, our 7-story building on Zandukeli 16 was being remodeled, as befitting Tbilisi State University’s (and Georgia’s) flagship education program. Yet, what I saw was utterly uninspiring.

Whoever “designed” the library, simply connected a series of small offices on one side of a long corridor. All walls were left intact. All office doors but one – designated as the main entrance - were permanently blocked, creating a cul-de-sac situation, with not even an emergency exit. An unusually narrow door, only 60cm wide (barely enough for a healthy Georgian guy), led to the registration desk, located right by the main entrance. An image of the three-headed Cerberus popped on my mind, -- “to prevent the dead from escaping and the living from entering.”

“We want to make sure that precious books don’t get stolen from the library”, I was told by my  new Georgian colleagues.

I was not convinced that preventing theft should be the main purpose of a library’s design. It took another 3 months of wrangling with TSU’s byzantine bureaucracy (nobody wanted to take responsibility for tearing down walls) and $50,000 to remodel the floor and create an effective institution. An institution where students spend all their free time, to study and socialize. An institution that demonstrates the spirit of ISET – modernity, openness, and dedication to learning.

To date, our library is not equipped with an expensive security system. Its doors are wide open 24/7, under students’ own supervision. And, as could be expected, a few books get lost (or maybe stolen) every year, which I consider to be a modest price for having an effective institution.

The law on agricultural cooperatives, passed by the Georgian parliament in July 2013, provided, for the first time since 1991, the legal framework for farmer cooperation, making it very easy for farmers to come together and register a joint legal entity.

All members are expected to be directly involved in agricultural activities of the group, but the minimum number of members is purposefully set a very low level – 5 farmers in the lowlands and 3 in the sparsely populated mountain areas.

The law does not restrict the kind of activities farmer coops are allowed to engage in – these can range from production and processing to transportation and marketing of agricultural products.

While required to operate subject to a fairly detailed charter, coop members are given considerable freedom in designing internal policies and procedures, including the rules for (democratic) decision-making and distribution of profits and losses.

A special legal entity, Agency for the Development of Agricultural Cooperatives (the “Agency”), was created under the Ministry of Agriculture, to facilitate the creation of agricultural coops, monitor their activities, and implement government support measures.

Anticipating a spate of benefits, including preferential credit and grants, tax privileges and training, more than 600 farmer groups registered with the Agency between July 2013 and February 2015. This could be considered a great success, except that registered farmer groups consist of only 6-7 members on average. Thus, the total number of households involved in the coop movement so far stands at less than 5,000 (or about 1% of Georgia’s rural households).

The small size and weakness of registered farmer coops is a cause of concern for the Ministry of Agriculture. Speaking to a group of stakeholders earlier this week, Minister Otar Danelia indicated that “time has come to shift from quantity to quality”, i.e. to make sure that registered farmer coops are real farmer organizations.

The purpose of the meeting, organized by MoA and the Agency in cooperation with the European Neighbourhood Programme for Agriculture and Rural Development (ENPARD), was to discuss a number of amendments to the law on agricultural cooperatives. These amendments roughly fall into two categories: those seeking to strengthen new and existing farmer groups (“positive”) and those seeking to prevent others (individuals or commercial operators) from creating businesses disguised as farmer coops in order to take advantage of whatever tax breaks and support measures offered by the government and international donors. Naturally, the two sets of measures are at odds with each other.

Belonging into the first type are proposals to:

The second type of amendments includes provisions to:

There are three problems with these amendments.

First, while the goal of increasing coops’ size is generally consistent with international practice and common sense, by retroactively imposing the new size restrictions on already registered coops’ the new law would result in artificial inflation of membership size or, much worse, disqualification of existing groups. Having smaller coops in the system (at least for the time being) would be a small price to pay to avoid a major crisis in the budding coop movement.

Second, the notion of “associated members” certainly addresses an acute need of new farmer organizations. Yet, coming with so many extra requirements and caveats – meant to prevent “abuse” and “theft” - this proposal is very unlikely to achieve its stated objective: create the conditions for cooperation between nascent farmer groups and external market players. A little bit of “theft” and “abuse” may be a reasonable price to pay for the chance to sustain farmer organizations beyond the scope of ENPARD, which is what “associated members” can help achieve better than anybody else.

Third, the cap on purchases and services to non-members is indeed a common way to encourage growth in coop membership. While somewhat true (non-members may decide to become members in order to gain access to processing machinery, storage, or distribution channels), the cap will have two detrimental effects. It would reduce the coops’ initial investment in processing or storage capacity (given limited own land property and agricultural production potential). A smaller investment, in turn, will reduce the coops’ ability to fruitfully absorb new members in the future. Additionally, the need to comply with the cap would create a huge headache for the coops (and the government agency in charge of monitoring compliance), reducing the attractiveness of farmer organizations for inexperienced smallholders.

LEAVE THEM KIDS ALONE AND LET A HUNDRED FLOWERS BLOSSOM!

The contradictions inherent in the proposed amendments are the result of trying to kill too many birds with one instrument, the law on agricultural cooperatives. At this early stage, it might be beneficial to keep the law as simple and as non-restrictive as possible. Farmer organizations are still a rare and exotic flower in the Georgian realities. Rather than restrictions, they need all the support they can get: from government, donors and, most importantly, private sector companies buying and purchasing agricultural products.

The focus of government policies should be, indeed, on the creation of private-public partnerships involving foreign and domestic businesses and groups of smallholders, letting hundreds of flowers bloom, and further nurturing those flowers that show potential for growth and replication. The fear of “theft” and “abuse” may be justified, but it is the wrong time to think about restrictions and caps. Some of the new coops will surely be set up to avoid taxes or benefit from preferential loans or grants, but even these will contribute to the country’s food security, as well as job creation and development in Georgia’s rural areas.

As suggested by Juan Echanove, EU’s Agricultural Attache in Georgia, the law is an important policy tool, but it is not the only tool available to policymakers. Access to government and donor support programs can be much more effective is achieving the policy goal of “shifting from quantity to quality”, with which we all agree.

Changing laws is a delicate matter, as Georgia is learning the hard way. If need to be, laws should be changed based on facts and analysis, and in consultation with those working in the affected sectors.