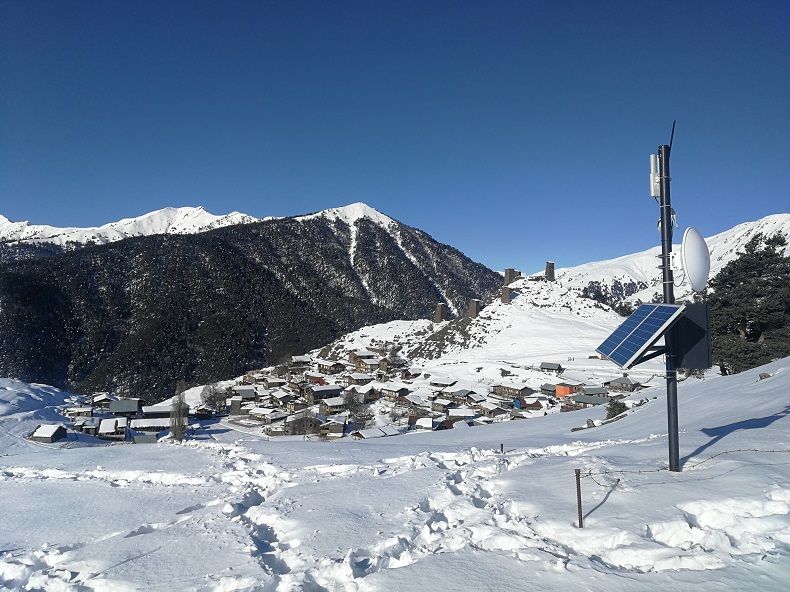 Back in 2005, as there was no mobile coverage, my uncle drove dozens of kilometers to the Jvarboseli village in Tusheti to inform me that I had enrolled in university. Now, in 2020, there is still no mobile signal in most Tusheti villages, including Jvarboseli, however people can use broadband internet to reach out the world!

Previously known only for its sheep farming and tasty Guda cheese, today Tusheti is also a famous touristic destination; while being home to one of the largest protected areas in Europe, covering three types of IUCN protected areas – Tusheti National Park, Tusheti National Reserve, and Tusheti Protected Landscape (and the UNESCO Biosphere Reserve is under consideration). In addition, Tusheti is a nominee of UNESCO World Heritage for its biodiversity and cultural legacy.

This stunning region attracted over 15 thousand tourists in 2019 (APA, 2019), though, because the only road leading to Tusheti crosses the 2900-meter Abano pass that closes in snowfall, it is reachable for only 4-5 months a year (June-October). This road is moreover considered one of the most dangerous roads on the planet (BBC, 2014).

Not only are the roads challenging for locals and visiting tourists, but the region also has limited connectivity – only around 40% of villages are covered by a mobile signal, and the remainder are detached, hindering development in those areas. As a result, tourism is very much concentrated and benefits only a few Tusheti villages, leaving most communities disadvantaged in terms of both communications and economic opportunities.

TUSHETI INTERNET AS A “COMMUNITY NETWORK”

Modern communications services (mobile, internet, etc.) are usually delivered by private companies. However, provision of these services in remote regions is expensive, as the lack of users and of general infrastructure (e.g., roads) and utilities (e.g., electricity) increases costs. Thus, deploying communication into such places is not profitable and the private sector is often reluctant to enter the market. Consequently, there is what economists often call a “market failure” in providing such services to the high mountainous regions. Affordable communication services, though, are in turn important for reducing the transaction costs of economic activities and expanding markets (e.g., high-value chains in agriculture or tourism).

In order to respond to market failure in the telecommunication sector, “Community Networks” have been created worldwide. This entails the setup, ownership, and management of the communication systems, all carried out by a local community – “the communication networks are built, owned and operated and used by citizens in a participatory and open manner” (GISWatch, 2018). Because such Community Networks are often based on volunteering, and do not have a commercial interest, they are more cost-effective in responding to challenges.

The world’s leading internet organization, the Internet Society (ISOC), supports the concept of Community Network development in order to connect isolated areas around the globe. In 2017, Georgia was able to benefit from this concept and deliver wireless broadband internet to deprived and underserved populations in the mountainous valleys of Tusheti. The Tusheti project was thereafter implemented and is run by the community organization the Tusheti Development Fund.

Their seed-funding and technical support came from the Internet Society (ISOC) and its Georgian chapter, including the Small and Medium Telecom Operators Association of Georgia. In addition, the project is supported by the Georgian National Communication Commission, the Ministry of Economy and Sustainable Development, and local self-government (the Akhmeta municipality). In 2019, further funding support came from the Czech Embassy in Georgia, helping to strengthen and expand the internet ecosystem in Tusheti.

The Tusheti wireless internet system is built around 12 masts and repeaters, located between 1800 to 3000 meters altitude, all of which are solar-powered. As a result of this innovative project, broadband internet is now available in almost all Tusheti villages. Consequently, locals can benefit from new development opportunities in the key economic sectors: tourism, agriculture, and authentic handicrafts (ISOC, 2018). Moreover, as the internet is the only source of connectivity for more than half of Tusheti villages (without mobile coverage), it offers many opportunities, including opening essential communication channels not only for business development, but also for healthcare and other emergency sectors (ISOC, 2017).

The Tusheti Internet project is a truly successful example of a public-private development partnership (PPDP); this project (often called #wifitusheti) also demonstrates a sustainable (social) business model that is the result of a) community-based development (via the Tusheti Development Fund), where community members understand the importance of volunteering and how this can contribute to the development of their community and region; b) strong internet users (mostly the private sector), who benefit from the internet and can afford the monthly fee for the service (50 GEL/month, equal to a one night tourist stay). While for a few dozen permanent Tusheti residents, wintertime (November-May) internet provision is free!

According to the TDF, almost all guesthouses currently use the internet and the number of users has been steadily increasing over the last three years; it is estimated that it will reach 120 by 2022, extending to all Tusheti villages.

The Tusheti Internet project has been widely recognized as a successful, innovative project. Its case study has been published on the ISOC and GISWatch websites, and it has been profiled by certain world media giants – the New York Times and Deutsche Welle. Moreover, it was the subject of a TEDx talk in Tbilisi 2018, among other presentations and discussions. This promotion is believed to have increased awareness on Tusheti and attracted more travelers to this breathtaking Georgian region.

As a successful pilot project, the Tusheti Community Network has been replicated in other high mountainous regions of Georgia (Pshavi, Khevsureti, and Gudamakari) and Kyrgyzstan.