Troubles to Cooperate in Georgian Agriculture

Nov 15 Posted by Robizon Khubulashvili in Agricultural and Rural Policy 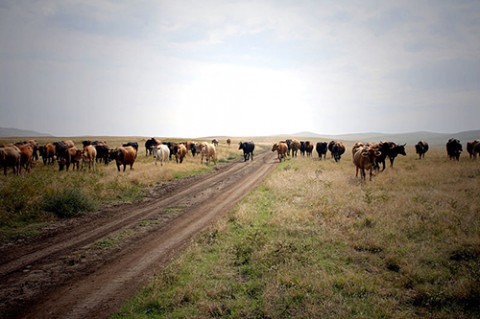 Georgian agriculture was more developed in Soviet times as it is today. Despite great overall technological progress almost everywhere in the last 20 years, Georgia moved backward when it comes to agriculture. In the year 1990, at the end of the Soviet Union, the number of cattle exceeded 4 million, while today it is just a little more than 1 million. In the Soviet Union, Georgia was a main producer of tea, citrus fruits, deciduous trees, and vine. According to the Rural Poverty Portal, after the collapse of the Soviet Union the output of some of these goods declined by up to 85 per cent.

The awkward state of the Georgian agricultural sector can also be described in comparison to other countries. In the graph, each dot denotes one Eastern European or Post-Soviet country. The horizontal axis measures the percentage of agricultural production in the gross domestic product (GDP), the vertical axis shows the share in total employment of the people working in agriculture. In the graph, Georgia is an outlier, but not in a positive sense. Countries with strong agriculture will be low and to the right, but Georgia occupies a place in the upper left corner. More than 50% of the Georgian labor force is employed in agriculture, but these 50% contribute less than 9% of the GDP.

A central aspect of this misery is the notoriously low productivity of Georgian agriculture, indirectly reflected in the graph. One frequently discussed proposal to overcome slender productivity is the cooperation of farmers.

COOPERATION IS A MUST

How could cooperation between farmers alleviate the problem?

First of all, cooperation would realize economies of scale. While the existence of economies of scale in agriculture is controversially discussed in the literature (and in this blog: see Eric Livny’s articles “Is Small Scale Agriculture Necessarily Inefficient?” and “Does Productivity Increase with Farm Size?”), there is no question that some agricultural activities yield increasing returns to scale. For example, it takes less than twice as much material to build a fence around a 10 acre farm as it does for a 5 acre operation.

Even more relevant may be the access to financial resources. The productivity in agriculture can be boosted by the application of machinery and the usage of fertilizer and chemicals. Yet upgrading the production requires capital, and the more collateral is available, the more banks are willing to provide this capital. Collateral requirements, however, can be met by cooperatives much easier than by individual farmers.

In addition, the advantages of forming cooperatives not only manifest themselves through an improved production, but also when the produce is brought to the market. The bigger the amount of goods one has to offer, the better is the bargaining position vis-a-vis a wholesaler or intermediary trader.

As one can check in the public registry, there are many agricultural cooperatives in Georgia. Personally, I visited some of them in Kvemo Kartli, Samegrelo, and Imereti. Unfortunately, many of these are not working effectively, some are even about to dissolve, and only a few are functioning well.

Some of these cooperatives were just established pro forma. Fostering cooperation between farmers is on the agenda of many development initiatives, and they provide monetary incentives to form cooperatives. As a result, farmers without a genuine interest to collaborate and without understanding of the economic potential of cooperation aim to draw on these resources by registering cooperatives.

Another problem is mistrust and discord among farmers, usually amplified by dysfunctional incentive structures. I know a cooperative in Kvemo Kartli that started out very promisingly, yet it followed a process of gradual disintegration. While in the beginning, all members were doing their best for making the cooperative prosper, sequentially people started to reduce their efforts and to free-ride on the work of the other members. Finally, only one woman was left working for the cooperative, and, as one may expect, she soon also threw in the towel. Today, the cooperative is de facto dissolved, even if officially it may still exist.

During my field trips to the Georgian countryside, I found three agricultural cooperatives in Imereti and two in Kvemo Kartli that were working very well. Yet all of them had one common characteristic: the members of these cooperatives were relatives or at least very close friends. This solves the incentive problem described above.

But what can be done to foster cooperation between non-related families?

It may be helpful to consider the traditional collaboration in Georgian agriculture that precedes and goes beyond officially registered cooperatives. Actually, it was never difficult to find instances of successful cooperation in Georgian villages. Traveling in the countryside, in the early morning and in the evening one will see the animals of different farmers being walked to the pasture and back to the village. The Georgian word for this is Nakhiri, and it encompasses more sophisticated agreements than one might expect. Peasants gather and take cattle to the pasture together and herd them there, and the assignment of tasks is rotating. If a peasant is unable or unwilling to do a task, he can compensate those who substitute him.

Also without formal cooperatives, it was not uncommon in Georgian villages for families to buy agricultural equipment together. In my own village Kveshi (close to Gori) I know several examples of two or three families joining their means to buy a little tractor together. Another common type of cooperation is lending agricultural land to neighbors in exchange for part of the harvested products.

These observations suggest that collaboration becomes feasible when the outcome is visible and the process is transparent. In Nakhiri, a peasant can observe every day whether none of their cows is missing. In case of jointly bought machinery, every participant can check whether the equipment is still there, whether it is intact, and how it is treated by the other owners. In case of letting land, the lenders can see the fruits hanging on the trees or the crops growing on the field, and so the harvest from which they get their share is seeable.

Nakhiri and the like may be a starting point from where more comprehensive cooperation can be developed.