Dec 12 Posted by Florian Biermann in Governance and Social Policy 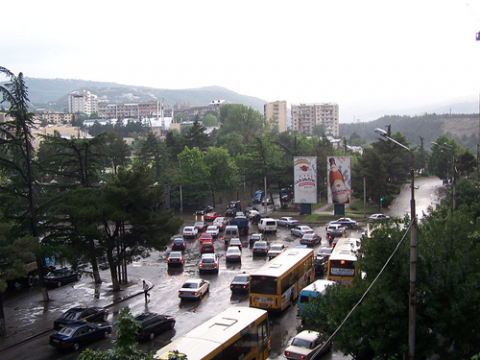 Recently, one of the authors of this article was crossing a street with a crowd of people at green pedestrian light close to Marjanishvili metro station, when a Mercedes was accelerating and heading towards the people, ignoring the red light, making the crowd splash in all directions. A police car was standing nearby, doing nothing.

Walking and driving in Tbilisi is usually dangerous and stressful. When walking around, pedestrians must continuously monitor the cars in their vicinity, even when walking on the sidewalks. The task of avoiding to be hit by cars is largely left to pedestrians, as many car drivers will not respect pedestrian rights. While Georgians are generally gentle and generous people, their attitude tends to change dramatically when they sit behind a wheel. Then fundamentally decent people turn into ruthless and selfish persons who would never give way to anybody.

When it comes to crossing a road, pedestrians need to be either patient and wait until there is a gap in the stream of cars, which in some streets can take a lot of time, or just move forward despite approaching cars. Whether or not there is a zebra crossing is irrelevant – the white stripes are not worth the color with which they are painted.

Yet also driving in Tbilisi is nerve-racking. Car drivers have always to be alert to react to harsh and dangerous violations of the rules.

Traffic in Tbilisi, and more generally in Georgia, is not only inconvenient and annoying but also hazardous. According WHO and World Bank data, Georgia is on the third place in Europe when it comes to casualties inflicted by car traffic. The traffic-related death rate stands at 15.7 persons per 100,000 people, after Russia (18.6 deaths) and Armenia (18.1 deaths). Slightly better is the situation in Azerbaijan with 13.1 traffic-related kills per 100,000 people. For comparison, in Iceland, Sweden, and the UK the traffic-related death rate is about 3 persons per 100 000 population.

In Georgia, 30-40% of all traffic accidents involve pedestrians, and as statistics of the “Georgia Alliance for Safe Roads” show, the number of car accidents involving pedestrians is increasing (see the chart). Georgia is moving backward rather than forward when it comes to road safety, in particular with regard to pedestrian protection.

WHAT CAUSES THE PROBLEM?

One of the most irrational policies of the last year was the reduction of traffic fines that was initiated by Irakli Garibashvili, who was then the minister of the interior. Several fines were cut down by 50%, e.g. the fine for speeding was reduced from 100 GEL to 50 GEL. It seems as if the government wanted to gain approval by reducing unpopular traffic fines, sacrificing the safety of citizens for some elusive political advantage and making Tbilisi an even less livable city. It is far from clear whether in the end the voters will reward such myopic policies.

Another issue is the easiness with which one can get a driving license in Georgia. One has to answer several hundreds of multiple choice questions which can be memorized in advance. Then one has to do some maneuvers on a designated learning area, where one has to avoid hitting barriers and getting off the street. Yet nobody tests whether a person knows how to drive in the city and on highways. In other countries around the world (e.g. in all European Union countries), driving has to be learned in real-world traffic, and in the final exam the aspirant has to drive a car on highways and through crowded cities under the supervision of a critical examiner. Considering how easy it is to get a driving license in Georgia, it becomes clear why many Georgians – let us be frank about it – are driving so badly.

Another reason is the failure of police to regulate traffic. Georgians are very proud of their police, which was one of the most corrupt in the 1990’s and was replaced after the Rose Revolution by a “patrol police” that does not harass citizens anymore. Yet while it is true that the police does not harass people, it is also not doing much good, at least when it comes to traffic. There are few cities in the world where one sees so many police cars driving around while the car traffic is so barbarian as in Tbilisi. Despite reprimanding other road users by shouting with their microphones, there is not much intervention on part of the police.

WHAT CAN BE DONE?

The best example how things can improve is given by the city of Yerevan, whose city center is now as quiet and pleasant as otherwise just known from Scandinavian cities. While traffic casualties are very high in Armenia, the traffic problem was completely solved in the inner parts of Yerevan.

What was done? In 2009 and 2010, the police started punishing misconducts of pedestrians and car drivers with 3000 AMD (about 15 GEL) and 20,000 AMD (about 90 GEL), respectively. Shortly afterwards, the police stopped taking fines from pedestrians as it was difficult to implement this policy. Pedestrians often did not carry their passports with them and it was difficult to identify violators what were recorded by cameras.

In addition, the police found creative ways to make road users respect the laws. The police recorded videos of the most dangerous maneuvers which were then shown in various TV channels. This made the whole topic of road safety very popular among the Armenian audience.

Moreover, a comprehensive system of video cameras was established in Yerevan, monitoring crossroads, traffic lights, and zebra crossings. Violations were effectively detected, and 20,000 AMD fine was not just an empty threat but a strong incentive to keep by the rules.

Finally, there were more traffic lights and zebra crossings established, making it easier to get around on foot, increasing safety, and reducing speeding.

Taming an uncivilized traffic is actually not a difficult problem. As experience shows, a strict enforcement of rules through the police together with reasonably high fines and an improvement of infrastructure can work wonders. All this is not expensive, and lack of money does not justify if the government remains idle about this urgent problem.