The Paths Towards Inclusive Economic Growth in Georgia

Jan 10 Posted by Tamta Maridashvili in Governance and Social Policy 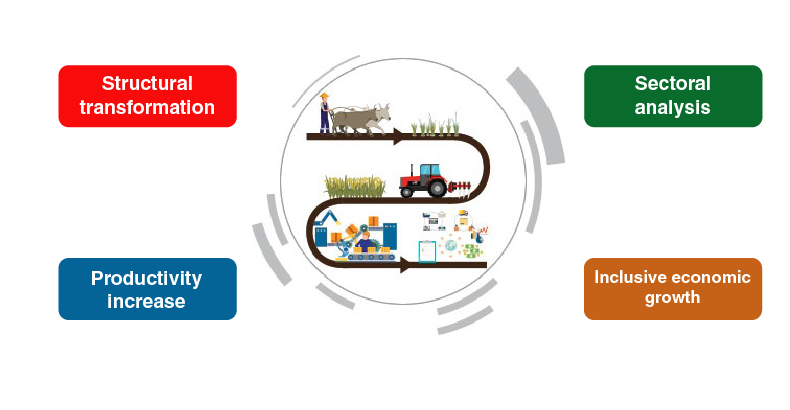 The economic policies of successive Georgian governments have arguably lacked cohesive direction when it comes to inclusive growth. There still remains an open question of whether the overall goal has been to pull people from agriculture or to leave them where they are, while pushing productivity up via, for instance, funding the development of cooperatives or clusters. Concurrently, the state also has introduced industrial policies, like establishing SME support agencies that operate under the auspices of different ministries. Trying a little here, a little there may have been a conscious policy, piloted in order choose which path to take. To date, however, such ‘experimentation’ has not helped to unravel the way forward. But if it is not about experimenting, then no significant change has been observed over the past 15 years: neither productivity has increased noticeably within sectors, nor can signs of structural transformation be detected (see figure 1).

Figure 1. The Economic Structure of Georgia: Sectoral Employment and Productivity2

Inequality has been expanding for decades globally. Neither redistributive policies helped, nor the trickle-down effect as a result of economic growth has activated to prevent the growing disparities. Inequality seemingly is not merely a moral or political issue, but also economic: empirical evidence3 shows that increasing inequality weakens economic growth, at least in the medium-term. These factors combined have created the call for the new paradigm of inclusive growth, which according to the OECD definition is “economic growth that is distributed fairly across society and creates opportunities for all.”

Predominantly since the Great Recession, inclusive growth has become an important pillar of global discourse, and the IMF, the World Bank, the OECD, and others, have reached a consensus that inclusive growth can be considered a new development model for addressing the inequality spreading worldwide. The Georgian government also followed the suit, and in its socio-economic development strategy – “Georgia 2020” – set the main objective as inclusive economic development. However, the political consensus around the new paradigm is still essentially an aspiration rather than a prescription. This article follows that aspiration and, based on the Georgian context, discusses alternatives towards inclusive economic growth based on the analysis of the economic structure.

In general, there are two ways, not mutually exclusive, that can result in economic growth: firstly, through increasing sectoral productivity, and secondly, through structural transformation, i.e. moving people from lower to higher productivity sectors. For growth to be inclusive and to cover as many people as possible, productivity should primarily increase in the sectors where the most are employed or/and labor should move from the lower productive sectors that also employ a large proportion of the labor force; for instance, it would be beneficial to increase productivity in Georgian agriculture as many are employed in the sector. By comparison, there are fewer people employed in industry, therefore a productivity increase, unless the sector also expands, would not lead to the same overall benefits for the economy; e.g. productivity in a small “niche” sector, like IT, would not immediately benefit many people economically. Instead, people need to be encouraged to move from agriculture to industry or the service sector where productivity levels are higher.

The various ways that encompass both, productivity increases within sectors and structural transformation will be discussed in the following sections. However, the purpose of this article is not to attempt to answer a million-dollar question by stating exactly which alternative is most feasible within the Georgian economy (for instance, increasing productivity in agriculture, or transferring people from the agricultural to the service or industry sector), rather to instigate a systemic approach when discussing the topic.

INCREASING PRODUCTIVITY WITHIN THE SECTORS

In theory, the greater a farm size, the greater the labor productivity since large farms are (1) financially more capable of adopting new technologies; (2) more likely to benefit from increasing returns of scale (use of machinery, access to credit, etc.); and (3) may face favorable input prices. Though, recent evidence shows that in practice it is not quite so straightforward. According to research by the World Bank (2017), in less productive farms, where farmers have lesser managerial abilities, the size-productivity relation has an inverted U-shape, specifically, revenue per hectare (ha) tends to increase with farm size, but once it reaches a maximum (average 3 ha) it decreases. For farmers with higher productivity and management ability, the situation is reversed: they benefit from expanding their farm size beyond the minimum threshold, while they show negative results when expanding within the threshold itself.

Following such research, let us discuss the hypothetical scenario of increasing productivity in agriculture without transferring people to other sectors. In Georgia, there is a highly fragmented agricultural land stock. The significant majority of farmers possess small plots: according to the 2014 Agricultural Census, 73.1% of landowners own less than one hectare of land, and on average this hectare is represented by 2-3 plots, each plot being around 0.4 ha (Census, 2014). If one assumes the majority of smallholders hold low-managerial skills, in order to keep them in agriculture and equally increase their productivity, the size of each plot would need to increase from 0.4 to 3 ha, which has not yet happened through land consolidation or any other means. Though if it were to occur, taking into consideration Georgia’s 2,000,494 ha2  of agricultural land, out of which only 787,600 ha is occupied by households and the private sector,5 theoretically it is possible to consolidate land of up to 3 ha for each smallholding farmer;6 however due to high fragmentation of land, it is hardly clear whether it is feasible.

While for further increasing agricultural productivity, by moving from low to high productivity farming headed by farmers with managerial abilities, larger plots of land are required. This in turn would lead to a labor release from agriculture.

Looking at the dynamics of employment structure, over 11 years there has been a 10-percentage point decrease (from 53% to 43%) in agricultural employment, mostly absorbed by the service sector. While, since 2007, in the industrial sector there has been an insignificant increase in the employment share, from 10% to a mere 13%.

When discussing the opportunities of structural transformation, one should primarily consider whether it is possible to expand the sectors where it is favorable for labor to move into. As seen in figure 1, labor productivity is much higher in the service and industry sectors than agriculture. Therefore, the discussion should relate primarily to the possibility of expanding the industry and service sectors.

MOVING FROM AGRICULTURE TO SERVICES

When discussing the possibilities of expanding the service sector, activities within this sector should be divided in tradable and non-tradable. Tradability is the property of a good or service that can be sold in another location, distant from its production. Thus, when a commodity can be exported, it is assumed to be tradable. The tradability of service activities is particularly important for a country like Georgia, which has a tiny population of around 3.7 million, and therefore cannot rely on domestic demand-driven growth.

It is also noteworthy to highlight that, as various countries’ experience reveals, service exports include more domestic content than manufactured goods.7 For example, in China and India, the domestic value-added share of gross manufacture exports account for 59.9% and 63.8%, whereas the same indicator for service exports is 93.6% and 87.8%, respectively.

MOVING FROM AGRICULTURE TO INDUSTRY

In the case of industry, demand is not a limiting factor as industry goods are tradable. However, there is an acute need for capital, and, concurrently, with increased automatization, industry has become skill-intensive. For instance, Dani Rodrik in his article “Are services the New Manufacturers?” argues that “manufacturing today is not what it used to be. It has become much more capital- and skill-intensive, with greatly diminished potential to absorb large amounts of labor from the countryside.” While on the other hand, China, by successfully establishing a stronghold in manufacturing, has made it much harder for many other countries to compete.

The last 15 years of experience has shown that rolling the dice is not the best option, especially in the context of Georgian resource scarcity. Rather, a holistic, cohesive strategy with no conflicting elements has to be elaborated upon and thereafter pursued. For that purpose, each sector and their characteristics have to be analyzed in more depth. One has to discover which sectors have the true potential for expansion and those for productivity increase. The analysis should reflect national, regional and international contexts and experiences and recent and forthcoming world developments.