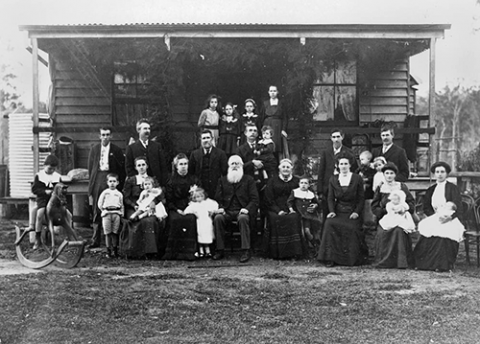 What is a family? Posing this question to a child in, say, Sweden, would almost surely lead to the answer “mum, dad, and children”. What would be the answer in Georgia? In Georgia, a child would most likely answer “grandmother, grandfather, mum, dad, and children”.  The multigenerational family, nowadays almost unknown in the economically more developed parts of the world, is still very common in Georgia.

2013 data of UNICEF derived from a sample of roughly 3000 Georgian households reveal the extent of this phenomenon. According to these data, in about 30% of Georgian households lives just one generation, i.e. a couple or a single without children, and in about 38% of the families live two generations, i.e. a couple or a single with children. 32% of Georgian families are truly multigenerational, which according to the terminology used throughout this article means that they consist of three or more generations. As multigenerational families are larger, more than half of the Georgian population lives in such multigenerational families. Compared to other countries, this is a striking number – in 2008, only 16% of US residents lived in families with three or more generations, and among white people just 13% (according to the Pew Research Center).

One might believe that this pattern is an outgrowth of Georgian culture. Isn’t it a particularly precious part of Georgian traditions to take care of grandparents within families, not letting them alone with their demands for assistance and support, and not shifting them off to nursing homes? Maybe yes, but we will argue that this is a rather involuntary state of affairs, and that the true driving forces are of an economic nature.

The first thing to note is that per person it is cheaper to live in larger families. The multigenerational family allows for the realization of what economists call “economies of scale”. Whatever the household owns, be it real estate, household devices, furniture, or means of transportation, in a larger family serve a larger number of people. If the grandparents live separately, it is not only their flat which needs to be paid for, but they may also have their own car, their own television set, their own usage of gas and electricity, and their own washing machine. Living together with their children, most of these things can be used jointly and have to be bought only once.

The next step of our argument is derived from the fact that average incomes per adult in a one-generational and a two-generational family are 60% and 20% higher, respectively, than in a multigenerational family (UNICEF data). This tells us something about causality. If people would indeed voluntarily form multigenerational units, then we should observe the opposite – there should be more money available per person in bigger families. As this is not the case, we can conclude that poorer families are reacting to their economics circumstances by living together.

The numbers show that Georgian are keen to form smaller family units when they can afford it. The need to live in multigenerational families is forced upon them by scarce economic resources, pressing them to utilize on economies of scale.

ONE HOME FOR OLD AND YOUNG

The fact that people in better economic conditions choose to form smaller family units does not mean that this is better than living in multigenerational families. In the end, isn’t it very idyllic when many generations are sharing the same roof?

Indeed, old people can share their wisdom with the younger generation. It is believed that the main reason why humans live so long after their reproductive age has ended is the role of old people in handing down important information to younger generations. In a world without libraries or digital data storage, grandparents possessed invaluable knowledge about which herbs could be eaten, how to cure illnesses and treat wounds, how to create certain tools, and so on.

In those times, grandparents also played a central role in raising and supervising younger children – they were the “nannies of the stone ages”. And in Georgia of today, such tasks are assigned to grandparents still quite frequently. In Georgia, it is very common to hear “I was brought up by my grandparents”, as in many families the parents are working while the grandparents take care of the children. In exchange, the younger generations help their grandparents in the accomplishments of everyday life. A perfect symbiosis, one might say – old people are helping their offspring to take care of the household and at the same time make sure that somebody takes care of themselves.

Moreover, multigenerational families to some extent compensate for an underdeveloped public pension system and a lack of saving culture. Georgians invest their money in the education of their children instead of saving it for their own retirement, as their children are their most important asset when they enter retirement. Isn’t this great? These different approaches in Georgia and, say, Germany lead to different expectations about how people should behave. Aren’t Georgians more humane than the cold and untroubled Germans who leave it to the government to take care of their old and weak?

TOWARDS A MODERN SOCIETY

The problem with the arguments made above is that all of them are ambivalent.

Indeed, Georgian grandparents share their “knowledge” with the younger generation. Often, this means that they meddle in the younger family members’ lives, have a say in whom to marry, whether that person has to be a virgin, and whether sex before marriage is allowed. Because of the big families, young couples in their twenties usually do not have their own apartments, and they have to meet in parks and other public areas to experience some kind of intimacy. To avoid these troubles, and urged by their grandparents, they marry early and have a high likelihood to end up as a bad match.

The elder generation not only imposes its moral values on the younger. They are also influential when it comes to other important life decisions, like educational and job choices. While in the stone ages the oldest were the most knowledgeable in the group, today relevant knowledge changes so quickly that the experiences somebody made 30 years ago, when choosing their job, may be entirely useless today. A young person may understand much better how the modern world works than a grandfather who grew up in the Soviet Union.

Similarly, it may be nice if generations help each other, but every such relationship yields dependencies. If there is harmony between the generations, there is no problem. Yet what if there are quarrels and arguments? The grandfather may still feel to be the “head of the family” even if he is economically irrelevant and the breadwinner of the family is his son or daughter. Perhaps, the grandmother does not get along well with her daughter-in-law (something like that is said to occur occasionally), and old persons sometimes develop behavioral peculiarities, unnerving everyone in their proximity. Under such circumstances, all parties are much better off if they do not share the same roof. Then, if the option to form smaller units is not given, life can become very unpleasant.

Finally, it may be more difficult for young Georgians to develop independent, autonomous personalities if they are living together with their parents for most of their lives. Of course, parents prevent a child from making mistakes, but making some mistakes may be formative and beneficial for the development of an own personality. For learning good behavior in, say, financial matters, it may be quite useful to once lose money due to foolish behavior.

The situation in Georgia is not so much different of how it was in the 1950s in Western Europe and the USA. Arguably, it won’t take 60 years for Georgia to catch up, and we can expect to see great changes within the next few decades.