The Long, Hot Summer: Why Did We Witness a Spike in Forest Fires and What Can Be Done About It – Part I 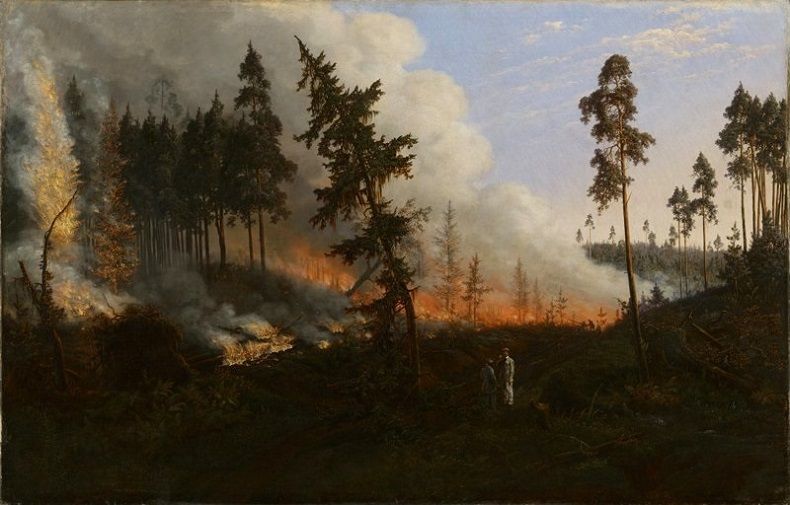 In the summer of 2017, Georgia experienced an unusually high number of forest fires across the entire country. 35 forest fires were recorded just in August (official data reporting the size of area burned by these fires is not yet available). In almost all regions of the country, several fires were reported. Among them, the conflagration in the Borjomi gorge had the most dramatic consequences: it lasted for seven days (20-27 August), and more than 100 hectares of forest were destroyed. Many people claim that these cannot be all accidental events. Is this necessarily so, or are there other, plausible explanations?

What is certain is that, whatever the causes, forest fires can lead to extremely high economic, social and environmental costs. While it may be impossible to completely prevent forest fires from occurring, proper forest management, and the adoption of legislation providing proper incentives for stakeholders to take a better care of forests and to avoid behaviors increasing the risk of forest fires, can do a lot to improve the situation. In this article, and in follow-up that we will publish in the coming weeks, we will be exploring the factors that increase the risk of natural and man-made fires, and discuss possible mitigating strategies, based on economic theory and international best practices. In today’s article, we will focus on natural forest fires.

Looking at data from 2017, one can see that during this year the occurrence of forest fires has been alarmingly high all over the world. According a report by NASA1 (2017), dozens of forest fires happening in the USA can be seen in a Terra satellite image2. According to the report, the number of fires occurring is much higher than it was during previous years. The authors claim that the fires were mostly due to hotter and drier natural conditions. European countries have also been suffering from an unusually high number of forest fires during 2017. According to Euronews,3 the number of forest fires in European countries in 2017 has been – so far – three times higher in comparison to the 2008-2016 average (see Graph #1). Euronews attributes the main reason for increased forest fires to climate change, especially higher temperatures. 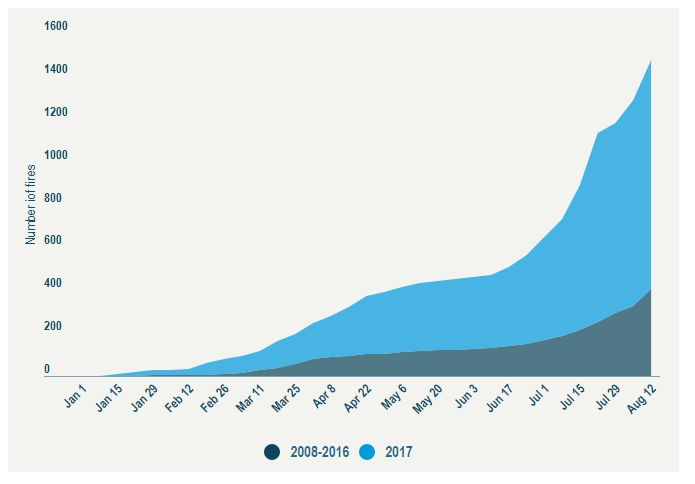 Scientific literature4 also supports the idea that the evolution of natural conditions during the last few years can justify an increase in the number of forest fires.

Existing weather conditions and the likelihood of forest fires are both affected by climate changes, which can potentially increase the risk of fires for several reasons:

Given the increased risk of wildfires associated with existing climate trends, developing and implementing more effective policies against such phenomena becomes an even greater priority. So, what can be done to prevent and fight wildfires more effectively? Here are some possible directions to pursue:

Estonia is a good example of how it is possible to implement successful policies in order to prevent wildfires. In 2002 and 2006, Estonia experienced a dramatic spike in forest fires (the majority of them were naturally caused). In 2009, the government decided to implement policies to fight against forest fires. These policies focused mostly on the training of local communities and individuals who were in charge of fighting wildfires. Training was important in order to increase communities’ awareness of the risks of natural fires, and to increase the number of volunteers fighting wildfires. Firefighters were also trained to expand their ability to prevent wildfires. The trainings included topics such as: what is the nature of forest fires, how to detect hot spots, and how to avoid their emergence. After the implementation of this policy, the number of forest fires declined (see graph #2), as did the total extension of the area burned during the fires.

In the short term, it is possible to fight and prevent natural forest fires by setting up a proper forest management system, and having well-trained and well-equipped staff. Increasing social involvement in the process of preventing forest fires can also reduce the risk of wildfires and increase the number of volunteers during emergency situations.

In the long-run – and from a broader perspective – Georgia can also join the global efforts to reduce the level of greenhouse gas emissions, to which it has committed by signing the Paris Agreement. Joining this effort will contribute to the fight against climate change and thereby help reduce the occurrence of favorable natural conditions for forest fires, not only in Georgia but all over the world.