Tea: a Potential Gold Mine of Georgian Agriculture?

Jul 17 Posted by Guranda Darchidze in Agricultural and Rural Policy 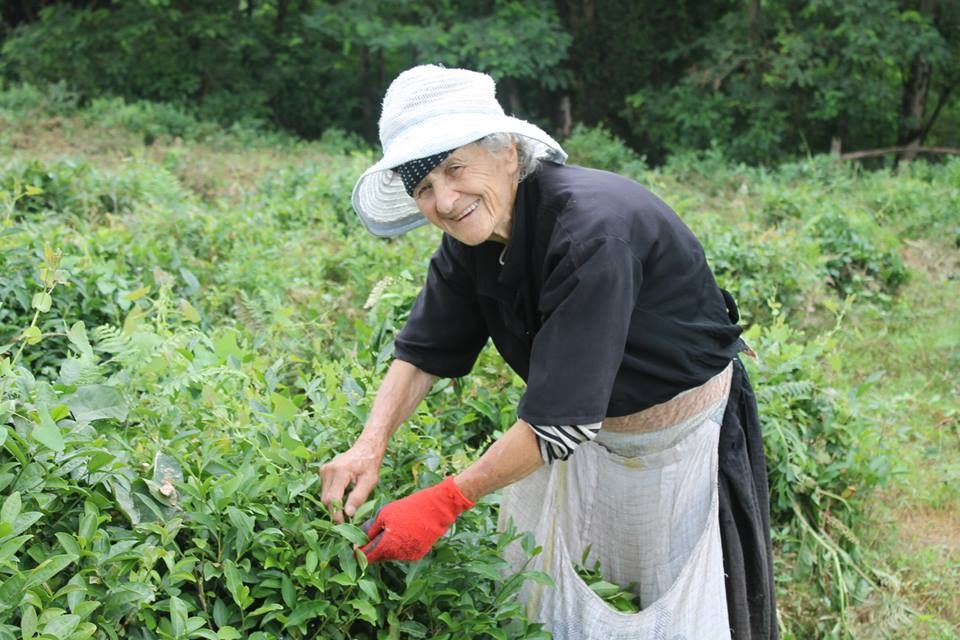 The first tea bushes appeared in Western Georgia in 1847, and since then tea production has played a significant, yet widely unknown, role in Georgia’s history. The humid and subtropical climate of Western Georgia in the regions of Guria, Samegrelo, Adjara, Imereti and Abkhazia are ideal for harvesting tea, and this was a fact eventually recognized by businessmen outside Georgia. With a commission to produce tea in the country, Lao Jin Jao, an experienced tea farmer, arrived from China in 1893. By 1900, the tea he was producing was world-class in quality, winning the gold medal at the Paris World Expo, a competition in which all countries producing tea (apart from China) participated. Since that peak, the history of tea in Georgia has been tumultuous, moving from the emphasis on quality to over-production and exploitation, and finally to practical abandonment. However, the prospective Georgia has of once again producing tea of the caliber achieved in 1900 is an important fact to keep in mind when thinking about what potential tea has in Georgia today.

THE GEORGIAN TEA INDUSTRY IN SOVIET TIMES AND TODAY

In the early 1920s, Georgia’s new status as a Soviet Socialist Republic led to the government taking an active role in the development and exploitation of the tea industry. The volume of tea produced was ratcheted up, and by mid-1900s Georgia was a leading producer of tea within the USSR, providing approximately 95% of the produce distributed across the Soviet Union (Nakhutsrishvili, 215). High production yields came at a high cost: the compromise of quality. Traditional hand plucking methodology that emerged in the 1890s was replaced by mass mechanical harvesting. The harvested quantity peaked in 1985 at 152,000 tons, a colossal volume of production compared to the 1,800 tons produced today (Hall 61; Geostat data 2014).

Between the fall of the Soviet Union and today, the tea sector in Georgia has practically collapsed for both political and politico-economic reasons. With the fall of the USSR, the government could no longer play a supervisory and organizational role in tea production. Neither was it fit for the task of helping re-orient the Georgian tea industry to new markets. The war of 1993-1995 in Abkhazia, a key tea-harvesting region in the northwestern corner of Georgia, also led to plummeting production levels, and, many of the abandoned tea factories were robbed, with their capital exported out of the country (mostly as scrap metal). 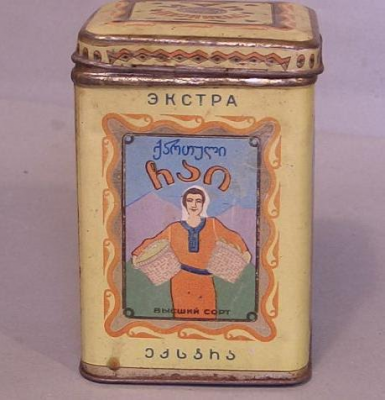 Due to the protracted halt in harvesting, tea plantations became overgrown. Re-cultivating them is costly, approximately 7-8 thousand lari per hectare. The meager incomes of local farmers (about 495 lari a month on average (Geostat, 2013)) are insufficient to finance rehabilitation efforts. Farmers’ uncertain and low income in combination with relatively high interest rates set by private banks are key barriers for farmers’ access to credit. Moreover, banks do not accept tea plantations or processing equipment as collateral, and the overwhelming majority of small-scale farmers are unwilling to risk losing their private property to take out a loan.

Due to these financial constraints and the lack of necessary resources to rehabilitate overgrown plantations, the amount of land fit for harvesting tea is plummeting. According to Tengiz Svanidze from the Tea Producers’ Association of Georgia, approximately 20,000 hectares of land were still suitable for tea harvesting in 2013; in May 2015 this quantity was halved to about 10,000 available hectares. Compare this to the 67 thousand hectares under tea plantations in the 1980s, and one sees the extent to which this sector has shrunk. Disorganization has led to practical abandonment, and the main challenge nowadays is to keep intact whatever knowledge and capital still remain.

THE SOCIAL AND ECONOMIC SIGNIFICANCE OF TEA PRODUCTION

In many villages of Western Georgia tea harvesting was a way of life. It formed the social fabric that towns such as Tsalenjikha in the Samegrelo region were built upon. Tea production is a labor intensive art, and in the 1980s about 180,000 people were involved in the tea value chain. The collapse of tea production has had the most detrimental effect on these tea farmer communities. As a consequence, many families fell into poverty. The most able among tea farmers migrated to Turkey, mostly for seasonal work in the Turkish tea sector.

The glorious past of the Georgian tea industry suggests that reviving the tea sector could bring huge economic and social benefits to Western Georgia’s rural communities. It could be key to alleviating rural poverty by providing families with steady jobs and income generation opportunities. The art and science of tea production would continue to be passed down from generation to generation, keeping intact Georgia’s social and cultural uniqueness.

Revitalizing the tea sector would also help diversify Georgia’s agricultural production and thus help insure farmers against price fluctuations of alternate crops, such as hazelnuts and blueberries, while also promoting bio-diversity and food security. This is a serious issue given the current tendency, observed in Guria and Samegrelo, to uproot tea plantations and plant hazelnut trees instead. Triggered by an exceptionally good season (and very high international prices) for hazelnuts, this tendency runs the risk of putting too many eggs in one basket.

The relatively low risk of tea due to its ability to withstand relatively severe weather conditions is an additional benefit, safeguarding farmers against bad harvests. Moreover, high quality teas that can be produced in Georgia would be competitive on world markets. According to the Ministry of Agriculture and private stakeholders, Georgian tea could fill the niche market of bio-clean produce that is in demand in advanced economies.

THE YET-TO-BE-REALIZED POTENTIAL OF GEORGIAN TEA

Georgia is one of the Northern-most tea harvesting regions in the world. Perhaps surprisingly for some, cool weather conditions at night and during winter months serve as protection against diseases – greatly reducing the need in pesticides. At least for the time being, Georgian tea is ecologically clean also because Georgian farmers rarely use (expensive and difficult to access) herbicides.

The combination of cool climate and acidic soil provides Georgian tea with a unique chemical composition, particularly fit for green tea: given these conditions, tea leaves mature more slowly, eliminating any bitterness in the tea’s aftertaste. Georgia is already producing high-quality tea that is exported to countries like Germany, but, production volumes not sufficiently large for large-scale export.

It is dumbfounding to think that Georgia is currently a net importer of tea given the industry’s history and potential. In terms of trade volume, 357 more tons of tea is imported than exported (2014). In value, (negative) net exports totaled more than 6 million USD in 2014.

In light of the above trade figures, it is easy to see that Georgian tea producers have not be able to capture their own domestic market. Why this is the case? Why should Georgia import tea when local production potential can fully meet domestic demand?

Some answers are provided by a study of the tea value chain which has been recently undertaken by ISET’s Agricultural Policy Research Center within the EU-financed ENPARD project. A key issue for the sector, so it appears, is the lack of appropriate linkages between producers and other actors in the value chain. According to the Ministry of Agriculture, Georgia’s has about 15,000 small-scale tea growers, cultivating less than 1 hectare of land. While constituting the overwhelming majority of tea producers in Georgia, these farmers face major problems in the “sorting, packaging & branding” department. As a result, most of them cannot get their product to any market outside of their respective villages. Not having long-term contracts with buyers further down the value chain, small farmers have no incentives to invest in the quality of their products, and, moreover, are looking for opportunities to shift to other crops (such as hazelnuts).

Broadly speaking there seem to be two ways forward in reviving the tea sector. First, those small-scale farmers who are willing and able to adjust their product to the requirements of the already-established Georgian tea brands, such as Gurieli, could be integrated into their supply chains. However, this would require a sustained effort on the part of the farmers to ensure consistent quality.

Another way forward, currently supported by the ENPARD project, is the creation of farmer cooperatives that could join forces in sorting, blending, packaging and branding unique tea varieties. In contrast to the rest of Europe, in Georgia, modern agricultural cooperatives – as opposed to Soviet era collective farms – are a relatively recent phenomenon. Perhaps one of the reasons farmers drug their feet on formal cooperation is the (wrong) association of this concept with the forced collectivization experience under the USSR.

The Tea Forum, which ISET-PI organized in Kutaisi early July 2015, was instrumental in dismantling such an association. The majority of farmers appear to understand the benefits of operating as a cooperative. The CARE consortium under the ENPARD project (which ISET is part of), is currently supporting two tea cooperatives. Other proposals will be reviewed in the coming months. Most of these are micro factories specializing in the production of high quality tea. The money granted by ENPARD will be paid back into a fund to finance additional cooperatives, allowing to further expand farmer cooperation. Already today, 27 tea cooperatives are registered in Georgia (including one second-level cooperative, uniting several production-focused cooperatives), and the numbers are steadily increasing.

Georgia currently stands at a major crossroads as far as the future of its tea industry is concerned. If overgrown plantations are not systematically re-harvested, and appropriate supply-side linkages are not formed, small-scale tea farmers will shift to other crops, and the tea sector would suffer its final blow. The government could clearly play a role in deciding the future of the sector. The Ministry of Agriculture has recently formed a committee to develop a strategy for the tea industry, but, as yet, no concrete plans are available for professional review and public discussion.

Given the extent to which the art of harvesting tea is cherished and respected in Western Georgia, it would be a shame to let the sector fail. This is not a sentimental judgment. The benefits of reviving the industry are also plain when looking through a purely economic lens.