Sorry, where is the contemporary art museum? 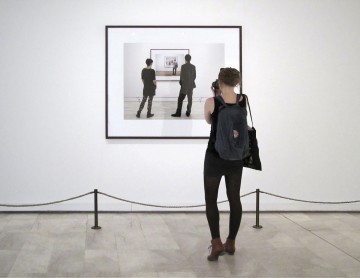 According to Ivanishvili, who made his $5.5 billion fortune in the Russian banking and metals industries, such headline-grabbing purchases were part of a calculated business strategy -- opening a world-class art museum in the Georgian capital, Tbilisi, that can do battle with New York City’s Solomon R. Guggenheim museum and other prominent modern art centers.

"This all started because I thought about what I can do for the country, for tourism, to rejuvenate Georgia," Ivanishvili said during an interview with EurasiaNet.org. Some “one, two, three hundred million” dollars have been set aside for the museum’s collection, he continued.

The Guggenheim Museum in Bilbao is an example of a new art museum contributing to the rejuveneration of a city. By some estimates, the initial investment of more than $180 million (not including the value of the art collection) was recovered after just seven years, not counting the economic impact on the local economy and the quadrupling of tourist arrivals. Unfortunately, Bilbao’s success proved hard to replicate in other cities – Helsinki, Sheffield, Milwaukee are examples of cities that failed in making their new art museum an economic success.

But in the end what matters is the art, and not dollar signs. Here's looking forward to finally seeing a contemporary art museum in Tbilisi.