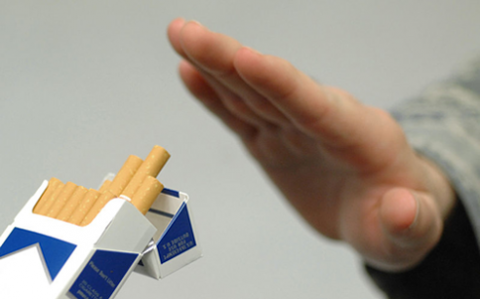 Tobacco consumption is widely known for its negative effects on health. According to the US Center for Disease Control and Prevention, just in the USA an estimated 443,000 people die per year prematurely due to inhaling cigarette smoke. As there are 46 million smokers in the USA, it means that in any given year, the likelihood to “die prematurely” because of one’s smoking habit is almost 1% (under the admittedly strong assumption that these numbers are constant in the long run). If one smokes for 10 years, the probability that one’s life will be cut short goes up to 9%.

Moreover, the amount of years by which one’s life shortens is considerable. As the British specialized health website patient.co.uk writes: “If you are a long-term smoker, on average, your life expectancy is about 10 years less than a non-smoker. Put another way, in the UK about 8 in 10 non-smokers live past the age of 70, but only about half of long-term smokers live past 70. The younger you are when you start smoking, the more likely you are to smoke for longer and to die early from smoking.”

WHY DO PEOPLE SMOKE?

This raises the question why people still smoke. If one observes apparently self-defeating behavior, there are some standard reactions of economists.

There will be those who claim that it is not irrational to smoke. Perhaps preferences of smokers are such that this behavior maximizes their utilities. This is the view of the economics Nobel Prize laureate Gary Becker, who in his famous paper “A Theory of Rational Addiction” (Journal of Political Economy 96, 1988, pp. 675-700) makes exactly this point. In his view, preferences are exogenously given, and behavior is rational whenever it is in line with those preferences. Thus, we can hardly know whether an observed behavior is really irrational – as long as there exist potential preferences for which it would be optimal to behave in that way, we cannot rule out that the behavior is rational. Only if behavior is internally inconsistent, when there are no possible preferences which would be compatible with that behavior, we can conclude that it must be irrational. Trivial examples for this are difficult to find, but one might imagine someone cleaning their floor while wearing dirty shoes (knowing that the shoes are dirty). Then the cleaned areas are getting dirty again in the ongoing cleaning process, and it would be difficult to find preferences consistent with such a behavior.

If smoking is indeed an optimal adjustment to the smoker’s preferences, we should observe that smoking is reduced when cigarette prices rise. This is indeed the case. In one recent study (Kostova, Ross, Blecher, and Markowitz (2010), “Prices and Cigarette Demand: Evidence from Youth Tobacco Use in Developing Countries”, NBER Working Papers 15781) it is estimated that in developing countries the price elasticity among smokers is –1.2. This means that if cigarette prices go up by 1%, the average smoker reduces their consumption of cigarettes by 1.2%. Yet if prices go up by 1%, the probability that somebody who is not yet a smoker will start smoking just goes down by 0.63%.

Other economists would take the observed self-defeating behavior as genuine evidence for irrationality. Indeed, many biases (i.e. systematic mistakes) in human decision making have been identified in experimental economics and psychology. For example, the time preference, the rate at which future consequences are taken into account when making decisions, may be distorted in a way which would qualify as irrational. This so called present bias has been identified in many studies (see the survey by Frederick, Loewenstein, and O’Donoghue: “Time Discounting and Time Preference: A Critical Survey”, Journal of Economic Literature 40, 2002, 351-401), though it is questionable whether Gary Becker would accept such the present bias to be proof of irrationality.

Finally, some economists would argue that the inclination to smoke may be influenced by the information available to a person. This is an issue also discussed in the cited paper by Kostova et al. – they find that the likelihood to become a smoker increases if one is frequently exposed to tobacco advertisements, and it decreases the more wide-spread the anti-smoking sentiment in a society is.

Without offering a conclusive answer, I want to contribute to this debate by looking at evidence from post-Soviet countries, in particular those in the South Caucasus. Smoking habits in these countries have several characteristics that are rarely found elsewhere, for example, there is an extreme excess of male smokers (source: WHO “Smoking Patterns in Europe”), a phenomenon possibly driven by cultural idiosyncrasies. The traditional view on women in countries like Armenia or Georgia is that they should not indulge in bad habits such as smoking and drinking, while for men there is much more leniency. Although tobacco consumption is not encouraged among men either, women are judged much more strictly, often based on arguments like: “Smoking women jeopardize not only their health but also their future children” (as fathers are role models for their children, smoking men will arguably have similarly negative influence on children).

If the decision to smoke is a rational one, the smoker would compare the utility from smoking each cigarette to its cost, and a cigarette would be consumed if the utility of the money paid for it would be lower than the utility of smoking the cigarette. According to the well-established law of diminishing marginal utility, the more cigarettes a person smokes, the lower the additional utility of each – hence, the point where the utility would not justify the cost anymore would be reached earlier the higher the cost were, leading to a lower consumption of cigarettes.

Then what about the information availability, i.e. the awareness of negative impact of tobacco smoke on health. To evaluate the attitude of people towards health risks of smoking I conducted a little survey in Armenia and Poland (45 participants in each country). Participants, all of whom were smokers, were asked two questions:(1) “How much higher is the chance of a smoker to die from a lung cancer, compared to a non-smoker? (in %)” and (2) “The chance of a male non-smoker to reach age 73 is 78%. What is the respective probability for a person who smokes?”

If smoking was primarily an irrational behavior, one would not expect these huge differences between countries. Why, in the end, would an Armenian or Russian be less rational then a Western European?

Nevertheless, price differences cannot explain well the differences in consumption between post-Soviet and Western countries, contradicting the view that these different behavioral patterns results from sober cost-benefit analyses on part of smokers. However, there seems to be a difference in the information and awareness of the health risks of smoking, possibly explaining the differences in the amount of smoking. To sum up, the exercise I have done here, even if it is very rough and does not live up to academic standards, could be seen as weak support for the classical “rational man paradigm” – at least for the very limited domain of smoking decisions (while it has to be emphasized, however, that many empirical findings, both from economic experiments and from the real world, clearly contradict this paradigm).

From a policy point of view, if one wants to reduce smoking rates in countries like Georgia and Armenia, providing more information about the risks of smoking may be more effective than raising cigarette prices.

Aram Grigoryan is a student in the second year of the ISET master's program who will graduate this year. He aims to continue his education in a Ph.D. program in Europe or the USA.